1 day trip to Epcot with children 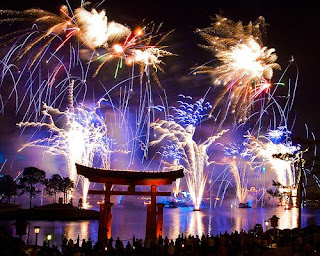 photocredit: Lebeau
My dear friend Brent is at a convention this weekend and he and his wife have decided to take their children (8yrs and 5yrs) to Epcot for the day since they have never been. He is going at an excellent time of year, but was unsure about what options existed at Epcot for children to do.
Below is what I suggested to him and I thought for those of you in a similar situation this advice might help you as well:
My suggestion? Get there at Park opening. Go directly (or send someone to go) and quickly go to “The Land ” Pavillion and get fast passes for Soarin’.
Then everybody walk over to Test Track. The line shouldnt be bad first thing. Ride Test Track.
If your fast pass has still not “come due” yet for Soarin’ as you’re walking over towards “the seas” stop by Club Cool and try the differnet types of coke. Try “Beverly” (its italian) you’ll LOVE it.
Once at “the seas” ride Finding Nemo and then go downstairs and do Turtle Talk with Crush. It is AWESOME! (again this is assuming your fast passes for Soarin’ aren’t ready yet. If they are then go ride Soarin (which is the best ride at Disney world HANDS DOWN!!) and then do the rest of what I told you.
Either before or after riding Soarin take the boat ride on “Living with the land” its really interesting (for kids too) and talks about growing foods in deserts and stuff. Its pretty neat and very relaxing.
After that stop by Innoventions and go to the place where you can pick up a ticket time for a Kim Possible Mission. Get a mission time.
On the way over towards world showcase stop in the giant pyramid and ride “Imagination with figment” if you want.
You might want to make dining reservations for lunch. http://disneyworld.disney.go.com/reservations/dining/ San Angel is my favorite, and Le Chefs France is great (especially if they loved the movie Ratatouille).
There is a lot of great entertainment that happens all over the world. You can see showtimes a t http://wdwent.com/.
I personally love Off- Kilter in Canada. World showcase players in UK, Serveur Amusant in France, and the Jeweled Dragon Acrobats in China.
** Because you are there at Christmas you also have the AWESOME holiday story tellers in each country which tell about their version of “santa” and let me tell you they are AMAZING and will keep your kids enthralled. So you really just need to look at the entertainment times and decide where you want to walk and when and how much walking your willing to do. My favorite story teller is LaBefana in Italy. Shes amazing! ** (In December only)
The one really fun ride in the showcase is in Norway. Its called Malestrom. The boat ride in Mexico is not bad either.
You can also meet Snow White in Germany, Jasmine and Aladin in Moracco, Belle, Princess Aurora (sleeping beauty) and sometimes the beast in France. Mary Poppins and Alice are both in the UK and so is Winnie the Pooh.
Make sure you get a Orange Grand Marnier in France (at the wine/ drinks stand) and be sure to try a pastry in France (my favorite is the eclaire).
Diva Husband and I have tried several times to “drink our way around the world”.
Fireworks will happen at 9:30pm. The BEST place to see them is at the Rose and Crown (if you can get reservations again) but we’ve seen them from Japan and liked them. That show is LONGGGGGGGG to me. So sometimes I watch them from the bridge between World showcase and Future World just so I can get out to the busses faster.
Have fun! Epcot is good (especially now with the story tellers out) you just have to know what the kids will like.
Diva
* I hope this article has helped you as well! *
Share this tip!