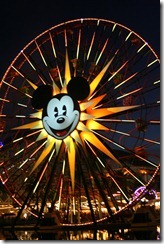 As annual pass holders within reasonable driving distance to Disneyland and Disney California Adventure, my husband and I sometimes have the ability to wake up on Saturday mornings and decide to head on out to the parks. I say sometimes because we also have to consider the fact that we have a three year old and a six month old, and certain days it becomes apparent early-on that we might not even get out of the house that day.

On the Saturday of Martin Luther King Jr. holiday weekend, we checked the pass holder website (just like I discussed in my Disneyland tips here) and discovered that most of the annual pass holders were blocked out. Score! So we made our way out of the house and arrived in the Toy Story parking lot shortly after 9 a.m. For those of you with small kids, I’m sure you recognize that this is no small feat. Packing alone can scare you out of the trip.

Number one Diva tip for any trip to the parks: pack extra. For us, this means extra formula, bottle liners, clothes, special straw cups, and diapers.

You never know when you may need what, and let’s face it, with kids anything is possible.
I’d like to tell you about our trip to show you that it is in fact possible to go to the Disneyland and Disney California Adventure on a holiday weekend, ride and see what you want to see with two small kids and to put in a full 10 hour day. So here is what our day looked like: 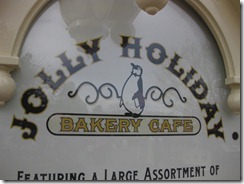 1) We began with a stop at the new Jolly Holiday Bakery Café. We were hungry and needed a breakfast snack, our three year old needed a milk in the special straw cup and our six month old needed a bottle. There was plenty of seating and minimal wait time for a yummy treat. I will have a full write up article on this place in the near future.
2) We stopped at the baby care center for diaper change and to use the small potty. Diva tip: baby care center is awesome. It has cushy changing tables, highchairs, small pottys, a microwave, a sink and filtered water. 3) Walked back to Critter Country for some Winnie the Pooh pictures. This did not happen for us because the line was long and our three year old melted down after five minutes of waiting. It’s life folks. We went on the Winnie the Pooh ride instead. 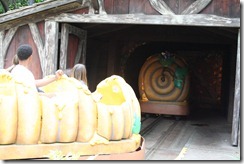 4) Headed back to New Orleans Square to get on the train. As previously mentioned here my three year old loves the train! They were working on the Toon Town Station so we decided to ride it to the Tomorrowland Station.
5) Rode on Buzz Lightyear. The line was long, I’m not going to lie. It looked like it was going to take forever, but it was surprisingly a short 15 minute wait. Of course, three year old had to use the bathroom in the middle of waiting. Luckily we were able to catch up to my husband and daughter further up in line. 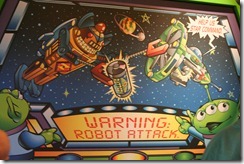 6) Lunch time! We totally broke the rule about eating at an off time and ate around noon. We ate at Rancho Del Zocalo in Frontier Land. Diva tip: eat at a place with entertainment for the little ones. This restaurant backs right up against Big Thunder Mountain Railroad. It’s fun to watch and wave to the people on the ride. 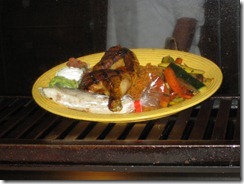 7) Returned to the baby care center.
8) Three year old has a minor meltdown. We decide to split up while my husband finishes feeding our baby, as she is ready for a nap. Budget Diva discussed the merits of being willing to split up in this article. After settling with a milk drink, our three year old expresses an interest to see Jake from Jake and the Neverland Pirates. So we head on over to Disney California Adventure and the Playhouse Disney show.
9) Denied! The show does not start for another 45 minutes. We rolled with the punches and decided to go into the Muppet Vision 3D show. Our baby was still sleeping, so we split up again and I went with our three year old into the show. He loves the jokes. He loves the 3D.
10) We went back over to see the Playhouse Disney show. Diva tip: if you want to get a seat up front, arrive early. This is an interactive show, and we have found it does not matter where you sit, but be aware that it is floor seating. There are benches around the outside of the room for those who need the support. 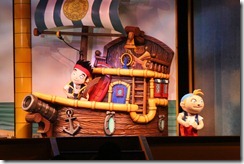 11) Time for a snack. We visited the Dulce Adventura on the Pacific Wharf . This also gave us a chance to rest. Our thought at this point was to eat a snack, ride the Little Mermaid and go home.
12) We rode the Little Mermaid ride. The line was super short, a maybe 5 minute wait. Niiiiiice.
13) As you probably guessed, we decided not to go home. At some point, we usually reach the point where we can go home and still be able to get the kids to bed on time because they will most certainly nap on the way home or we can stay until their bedtime knowing they will sleep on the way home. We went for it!
14) Visited the baby care center for a diaper change. My six month old was rolling around on the changing table and cut her hand on the paper they put down over the table cushion. I kinda freaked out. Yes, I did. I have had one of those serious MRSA infections before, so we took her over to the first aid to get it cleaned and get a band aid. It was probably an over reaction but here is a Diva tip: the first aid center has band aids, ice, antiseptic wipe and pretty much everything you may need safety wise. When I had gestational diabetes, they also had disposal containers and private rooms to test.
15) We rode the Little Mermaid ride again!
16) On the way to get our strollers, we noticed a line and saw Doug from the movie Up (Squirrel)! This is the first time we had seen that character, and after a quick trip the bathroom, we got a picture with him. 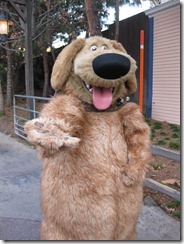 17) My three year old and I decided to ride Jumpin Jellyfish after seeing how short the line was. My ulterior motive was to check on the progress of the new Cars Land opening up this summer. The jellyfish get really high above the park and you can see a lot. Cars Land is really coming along! 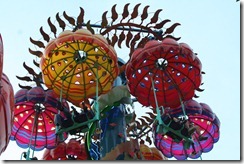 18) Back to the baby care center to feed the baby. They have high chairs and sinks that make clean up of a messy eater easy!
19) It was dinnertime, so we headed on over to the Test Pilot’s Grill because it was getting cooler and they had indoor seating. My son and husband split a meal. Here is a great Diva tip: split meals if you can. Not only does it mean you indulge in a yummy snack later, but many of the meals in the park are far too large for one person to eat. This is especially true when it comes to the little ones. You can also order a kids meal for yourself or little one.
20) We headed over towards Bugs Land. My three year old loves Heimlich’s Choo-Choo and the bumper car ride. My husband rode both with him, while I fed the baby a bottle. It was nearing her bedtime.
21) It was around 7 p.m. so we decided to head on out. We have found that if we leave at this time, both kids sleep on the way home and when we get home we can just change them and put them to sleep in bed.
So folks, we did not plan any of this day, but it was still a lot of fun! Sure we probably could have gone on more rides or see more shows, but flexibility is the name of the game when you have kids. We might have also been able to push things a bit and stay later. The day was perfect for our family as it was. Now, go out there and visit Disneyland without fear, just enjoying your experience for what it is!