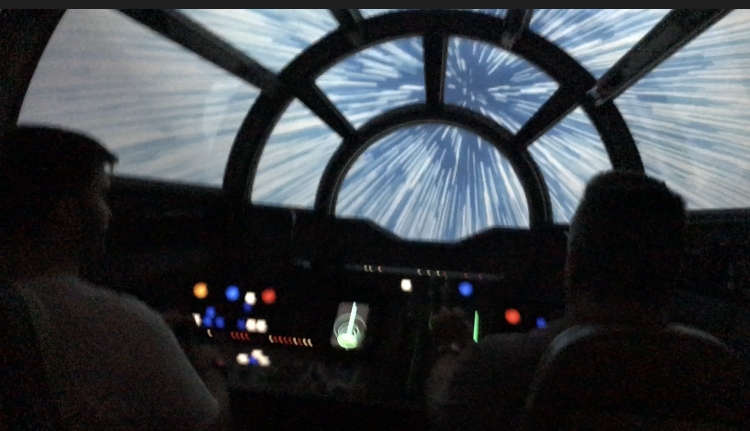 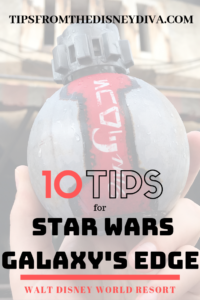 After waiting for years, Star Wars fans visiting Walt Disney World Resort were finally able to travel to Black Spire Outpost on Batuu last week.  It was a moment years in the making, and you can tell.

After traveling to Batuu on Opening Day, and several days thereafter, I’ve got 10 tips to make your experience more magical.

1. Get ready to play the part. Star Wars: Galaxy’s Edge is even more immersive than Pandora: World of Avatar.   If you’re not a huge Star Wars fan, you’ll still be impressed with your time at Galaxy’s Edge. But it may help to do a little research so you’ll understand (a little more anyway) what you’re experiencing.

Star Wars: Galaxy’s Edge is set on the planet of Batuu.  More specifically, you’ll be visiting a village called Black Spire Outpost – a place were members of the Resistance (the good guys) mingle as unobtrusively as possible among the First Order (the bad guys). Of course, there are more than just rebel spies and stormtroopers – you might encounter a smuggler or two too!

Just as when visiting any foreign land, you may want to brush up on a few phrases you may hear on Batuu.  Batuuan cast members will refer to you as a “traveler” instead of a “guest” and greet you with “Bright suns!” instead of “Good morning!” or “Rising moons!” instead of “Good evening.” They’ll refer to “credits” when talking about money, will ask for your “credentials” for identification, and ask if you’d like your purchases in “cargo bags.” If you have a lightsaber, they may comment on your “scrap metal” and if you need to ask where the restrooms are located, they may call them “refreshers.” Anywhere outside of Galaxy’s Edge is referred to as “off-planet,” and when departing you’ll often hear “Til the Spire!” Don’t be afraid to use this lingo yourself.  It really makes your experience more fun! 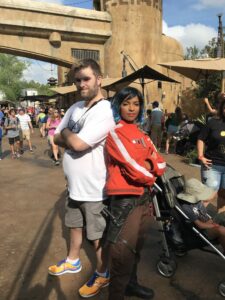 2. No character meet and greets. There aren’t character meet and greets like in other areas of Walt Disney World. But, instead, you will likely see Rey and other characters from the films wandering the Outpost.  Don’t be afraid to talk to them! Interacting with travelers is part of the story. But be warned – they may not be able to stop and do photos with you. We didn’t see anyone doing autographs, and sometimes they wouldn’t even respond when we tried to interact with them. (Maybe they were trying to escape before being detected by a stormtrooper?!) What we did see was much more natural and authentic, as if they really WERE going about their business on Batuu.  We saw Rey, Chewie, and Stormtroopers multiple times.  We saw Vi Morandi (a Resistance Spy) several times, and she did an outstanding job being in character.  Kylo Ren supposedly is also on Batuu, but we never saw him.

3. Be willing to try something new. In keeping with the immersive theme, the food in Black Spire Outpost may strike you as being a little exotic. You won’t see burgers, fries, pizza, or turkey sandwiches here.  But don’t be intimidated by the name of the dish listed on the menu.  Fried Endorian Tip-Yips is really just fried chicken with roasted mashed potato.  Read the menu descriptions.

One of the most popular items on Batuu is the Coca Cola thermal detonators. These caused quite a stir online when the Transportation Security Administration (TSA) indicated they wouldn’t be allowed in either checked or carry-on luggage. There was a fear they looked a little too realistic and could be mistaken for a weapon. But thankfully that position was reconsidered, and since then TSA has issued a formal statement that these Coke bottles are allowed in checked luggage or carry-on luggage if empty. 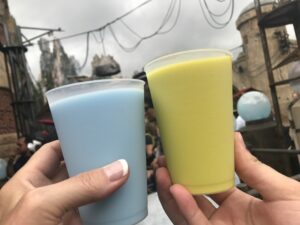 In addition to the food, you’ll want to sample at least one drink on Batuu!  You can find blue or green milk at Milk Stand (they have both alcoholic and non-alcoholic versions).  We tried both blue and green, and had split decisions on their appeal.

If you can get a reservation, stop by Oga’s Cantina. 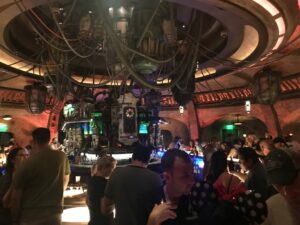 A lively bar, Oga’s is filled with great music, crowd interactions, and out of this world drinks.  It’s small, and most travelers stand at the bar or small cocktail height tables. There are booths available, but it looked like only larger parties were seated. There are both alcoholic and non-alcoholic drinks available, and kids are welcome, but the only food available is Batuu Bits. 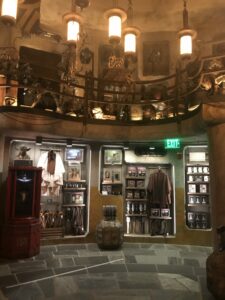 4. Stroll through Marketplace. Located in the center of the Outpost, the Marketplace is a small row of shops with clothing, games, supplies – everything the inhabitants of Black Spire Outpost may need. The shops are extremely small, most with capacity for only 3 to 10 people.  Other shops, like Dok-Ondar’s Den of Antiquities, is a bit larger and can accommodate maybe 30-40 people comfortably, but you won’t find anything like the Emporium or Mouse Gear in Black Spire Outpost. 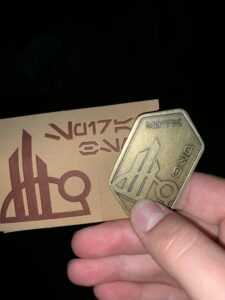 5. Shop. You’ll probably want a souvenir of your visit to Batuu, and there are several choices! One of the most unique we found was a Batuuan Spira – a gift card made of metal and inscribedto look like Batuuan currency. The card is very popular, and sold out at Disneyland almost immediately, but we did see it on Opening Weekend at Star Wars: Galaxy’s Edge.  The Spira is reloadable, comes loaded with $100 on it, and can be used both on and off-planet (i.e., you can use it anywhere you can use a regular Disney gift card)

Another popular souvenir of course is a lightaber.  Watch for a full account of building a custom lightsaber at Savi’s Workshop in the coming days.  If you can’t get a reservation to build your own lightsaber, be sure to check when you arrive on planet.  If the Force is with you there may be a walk-in opening available.  Legacy lightsabers (pre-built) are available for purchase at Dok-Ondar’s Den of Antiquities.  You can choose one just like your favorite Jedi or Sith Lord!

Maybe engineering is more your interest.  Build a droid!  We saw so many younglings (and those who are young at heart!) building their very own droid from component parts they selected at the Droid Depot.  While you’re there don’t forget to say hello to my favorite droid, R2D2!

6. Finding your way around Batuu can be a little confusing. The buildings all have the same general appearance – lots of natural colors and a junkyard feel.  Signs, of course, are present, but buildings aren’t labeled with bright, colorful signs and graphics as they are in other areas of Walt Disney World.  Most buildings look essentially alike, and you can’t distinguish one from another. You will notice that when there is a sign, it is likely to be in Aurebesh, the writing system used on Batuu.

Diva Tip: There’s a translator on your datapad (see #8, below) When navigating your way around Black Spire Outpost, be sure to grab a map, use your My Disney Experience app, or ask cast members – oops! – I mean the residents of Batuu – for help. 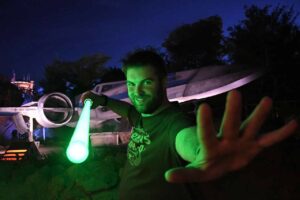 7. Don’t forget to have your photo taken. Of course, on Batuu you won’t find Disney “PhotoPass” photographers.  But you will find wonderful people who will be happy to capture a holoimage for you. When we visited, right outside Docking Bay 7 Food and Cargo there was an opportunity to have a holoimage taken with the Millennium Falcon in the background.  And in the plaza by Kylo Ren’s ship, you could get two different holoimages: a “tiny world” or, depending on crowd levels,  a “zoom” image.

Diva Tip: The queue for Millennium Falcon: Smugglers Run prevents those priceless “solo” (no pun intended) shots with the Millennium Falcon you may have seen from Disneyland Park. Hopefully when the queue becomes shorter, you’ll have the same amazing opportunity at Hollywood Studios.

8. Pay attention to the details. There is really so much to appreciate. One fun way to make sure you see all Black Spire Outpost has to offer is to open the Play Disney app.  Whenever you’re on Batuu, your smartphone becomes a “datapad.” You can use it to search for and scan images, choose a job to complete, or explore and use tools.  Think of it as a high-tech, advanced version of Sorcerers of the Magic Kingdom! The Imagineers have really paid attention to every detail to make you truly feel like you’re on the Outpost.  Be sure to notice the trash cans and restrooms – unlike any you’ll see elsewhere at Walt Disney World. Or just strike up a conversation with a resident of Batuu. Some will know many details of the Star Wars story – and others will be unaware.  And that makes the experience all the more real.

Diva Tip: See if you can find the Trilon wishing tree.  In the Batuuan culture, residents tie a ribbon on the tree for wishes, hopes, dreams, fears, paths, and promises.  The legend is when the ribbon eventually disintegrates, your wish will come true. 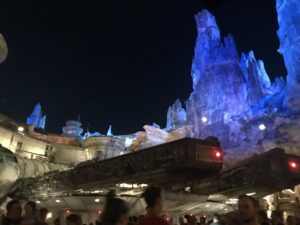 9. Try to visit both in the daytime and at night. Like Pandora, Black Spire Outpost is gorgeous at night.  The spires take on a bluish hue that is truly breathtaking.  But if you only visit at night, you won’t get the gritty, junkyard, authentic aesthetic of this outpost that’s only visible in daylight. You’ll want to experience both sights.

10. Don’t let the fear of huge crowds keep you away.  Opening Day was crazy, but since then the crowd level has been manageable. While virtual queue boarding groups were utilized on Opening Day, they haven’t been needed since then (as of this writing, anyway.) The wait times for Millennium Falcon: Smugglers Run hovered around 90-120 minutes most of opening weekend, and during the first couple days of Extra, Extra Magic Hours they dropped to as low as 30-40 minutes by 8:00 am. Excluding Opening Day, we haven’t seen the 300 minute waits that were common for so many weeks when Frozen Ever After or Avatar: Flight of Passage opened.  But, it’s worth noting that the same weekend Star Wars: Galaxy’s Edge opened Epcot International Food & Wine Festival opened AND a hurricane was threatening Orlando. So the crowds may increase, especially as the holidays approach. If you really want to fly the Falcon and see a wait time of under 100 minutes, go for it!

Even if you don’t want to wait to fly that “hunk of junk,” go visit Black Spire Outpost.  It is truly another world.  And when are you going to have another chance to leave Earth?

And here’s my bonus tip – read Tinker Belle Diva’s article on Star Wars: Galaxy’s Edge at Disneyland and Soarin’ Diva’s article on the Passholder Preview held at Hollywood Studios. And although I didn’t get to Black Spire Outpost in California, my son did and you can read about his experience here.

Of course, the best tip of all I can offer is to rely on Military Diva Patricia of All for Dreams Travel to help book your visit. You can read her tips, or contact her for a quote so you can live your Star Wars story!