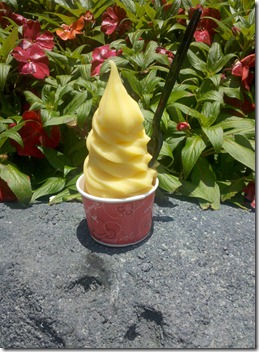 This is an absolute MUST TRY at Walt Disney World, the Dole Whip.

You can find this swirly bowl of awesomeness at Aloha Isle in Adventureland in Magic Kingdom. And you should FIND IT! For those of you lucky enough to be staying in the Polynesian resort, if you head to Captain Cook’s you can dispense your own Dole Whip into a cup!

What is it? Essentially it’s a non-dairy, soft serve Pineapple flavored delight. I’d call it ice cream, but it kind of is and kind of isn’t. You can get yours either plain pineapple as shown beside here, or you can have it as float as shown below with pineapple juice. You can also have your pineapple swirled with vanilla which tones down the taste a little for those who “aren’t pineapple fans”. Even if you don’t normally like pineapple you should try a spoonful of this 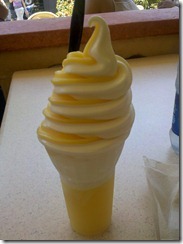 deliciousness. Its practically a part of the Disney World initiation process!

Be warned however that they are extremely addictive. You will literally be driving down the road months later and think “wow, I could really go for a Dole Whip!

Make SURE you give one a try on your next trip!