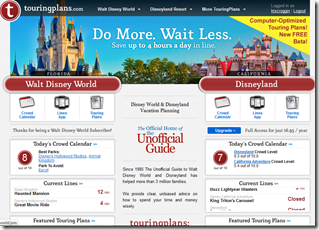 My favorite resource for crowd estimations is http://touringplans.com/ !

If you go to the site and click on crowd calendars it will tell you one month out what  the crowd level is, which is the best park to go to (based on crowd level in that park), and which is the park to avoid (because it has the highest park level).

You can get full access to the entire years crowd calendar for 365 days for only $10.95 and that includes the “Lines” app which is BY FAR my favorite app. Lines tells you the wait times of rides and people who are in the park are constantly updating the times so you really have a great read on how buys the parks are.

They also have awesome Touring Plans http://touringplans.com/walt-disney-world/touring-plans that will tell you which order to go to rides inn the park in order to minimize waits. It has plans if you’re doing Extra Magic Hours and even a one-day touring plan for princess fans ages 4-8. These are particularly awesome if you’ve never been to Disney World or Disneyland as they, based on extensive research, literally tell you which order to go in. Pretty awesome.

So there’s my 9th day of Diva Christmas tip for today. Invest the $10.95 in touring plans for full access or at least go visit the site!