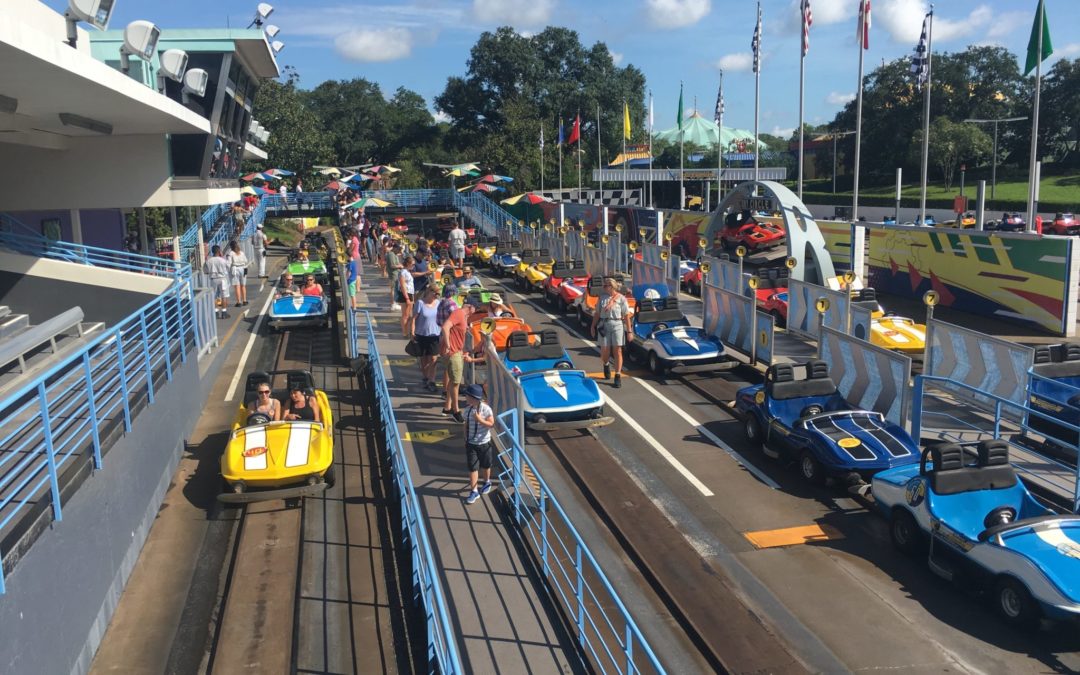 One very hot, very humid August day, as I stood in the full sun waiting in line for the Tomorrowland Speedway, I thought to myself: “Wow, this ride is really not worth heat stroke and sunburn.”

And yet, every single time we go to Walt Disney World, I find myself waiting to ride this ride. Why? Because my girls love it, and I am a (fairly) doting parent. But it set me to thinking: there are just some rides that I really don’t like, while my kids absolutely love them. 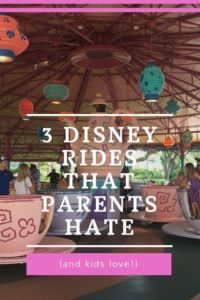 I’m probably going to get flamed for my unpopular opinions, but here are three rides that my kids love (and I hate!)

Since I already mentioned this attraction, I’ll elaborate further. The Tomorrowland Speedway, in case you’ve never been dragged on it, is located in Tomorrowland and designed to resemble the famous Indiana Motor Speedway. The Disney website gushes on about the “unique” streamlined race car with a “real-working” gas pedal.

You’ll “drive around sharp bends, past lush foliage, and pick up the pace underneath a small bridge. Along the way, listen to an announcer call the race overhead…. Go for a personal best or race against a family member or friend. In the end, coast into Victory Circle, at the top of your game—champion of the track!” 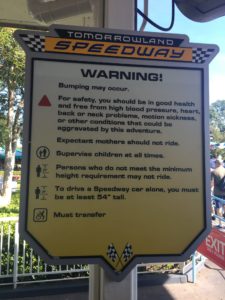 They do warn you: bumping may occur.

This description certainly *sounds* great. However, this race is run on a course where there’s a guide track underneath, so you have very little real control over the vehicle. As far as racing goes, you are tooling along at a blistering SEVEN miles per hour.

The “real-working” gas pedal is very, very difficult to press down, and my children usually insist that I depress it while they steer. By the end of the ride, my foot is in spasm from the effort. This is after I have wedged myself in, and then out, of a tiny car about the size of a Barbie jeep.

Most of the line for the ride is in the full sun. This is one attraction where I actually feel sorry for the cast members as they sweat profusely in the loading area.

But perhaps the most-hated aspect of this ride for me is the fact that even though cast members work hard to space out cars, and even though there are many signs warning against it, we always, ALWAYS get crashed into from behind by another car. Furthermore, there’s always someone in front of us going so slowly that we catch up to them, so we cannot even go our glorious seven-mile top speed.

Tip: We arrive at the Magic Kingdom when the park opens and make this ride our second stop, right after Space Mountain. If you do it that way, you can ride both rides without using a Fastpass+ or waiting more than half an hour or so. 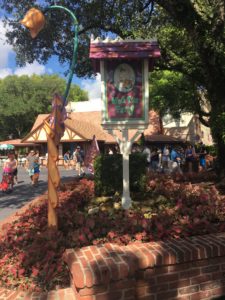 The Mad Tea Party can be found in the Magic Kingdom in Fantasyland. Don’t even think about going on it if you are prone to motion sickness

Coincidentally, this ride is located in Fantasyland almost next to the Speedway. So that means my kids can go directly from one to the other, usually on the way to the Seven Dwarfs Mine Train.

The Mad Tea Party is based on the animated classic Alice in Wonderland, and modeled after the Disneyland attraction of the same name. A version of this ride exists in every Disney theme park around the world.

Tip: You can often find Alice herself next to the Mad Tea Party (check the My Disney Experience app for times) and she rarely seems to have a line.

Up to 5 guests sit in giant tea cups that are located on a large disk with three turntables. The cups spin independently on the turntables, but guests can also control the direction and speed of the spins by turning a wheel in the center of the cup.

If it sounds sickening that’s because it is. If you have a particularly energetic person in your teacup, you can go so fast that you pull a few “gs” of gravity and feel simultaneously nauseated and dizzy. Do NOT go on this ride if you are at all prone to motion sickness.

I am fortunate in that I have only been forced to go on this ride a handful of times. My husband usually would ride with our girls and now (blessedly!) the older one is old enough to take her younger sister on the ride herself, so we are able to watch from the sidelines. 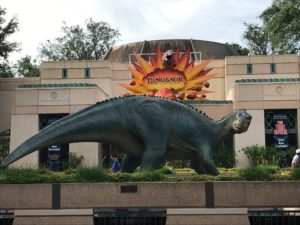 Outside the Dinosaur ride at Animal Kingdom. Photo courtesy of Soarin’ Diva

Tip: While this is a “slow-loading” ride and Fastpass+ does exist for it, if you ride in the morning or after 5 pm, it usually does not have a long line.

Billed as a “joyride to the dinosaur age” by Disney, this attraction *seems* like it would be enjoyable. It even has Bill Nye the Science Guy in the videos that introduce you to the backstory, which is that you are on a secret mission back in time to rescue a friendly dinosaur before a meteor hits and causes mass extinction.

I give bonus points to Dinosaur because the theming is amazing and it truly tries to be an “edutainment” type of attraction, where you learn something while having fun. 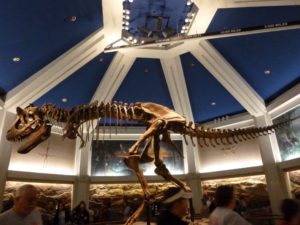 However, in my opinion, this ride is anything but fun. It’s noisy and assaults all your senses. It’s jerky and jolty. Even when I know what’s coming, I don’t seem to be able to brace myself. I come out feeling beaten up and like I just might have whiplash. But my kids inexplicably like it.

Tip: Unless it’s during peak holiday season, you rarely need to “waste” a Fastpass+ on Dinosaur.

While it didn’t make my top three because only one of my kids likes it, Mission Space in Epcot is worth an honorable mention on any list of “hated” rides. I disliked it so much the first time I rode it that I have never been on it again, even though it was recently reimagined and a milder, “Green” mission introduced. Stitch’s Great Escape (again, luckily, not a kid favorite in my family) has mercifully closed for good…I hope!

What are some of your kids’ favorite rides, and are they your favorites, too? Comment below and let us know!

Get FREE help planning your Disney vacation when you contact Patricia at All For Dreams Travel, the official travel agency of the Disney Divas and Devos!