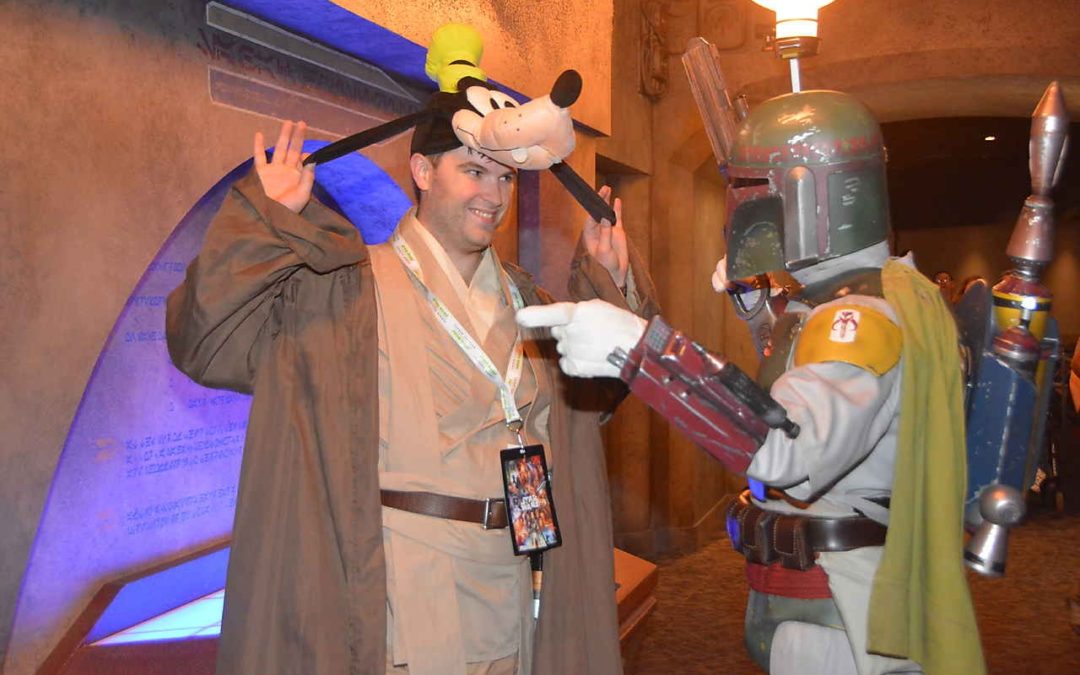 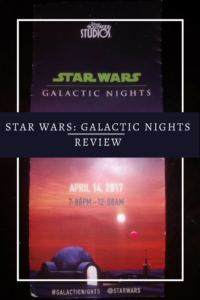 We’ve been waiting for almost two years now. Star Wars fans across the Galaxy have their tickets purchased, and are counting the minutes until Star Wars: The Last Jedi premiers on December 15th.

To help celebrate all things Star Wars, Walt Disney World Resort is once again hosting an epic party at Hollywood Studios. Star Wars: Galactic Nights will be held on Friday, December 16th.  It promises to be an event Star Wars fans from across the galaxy will want to attend!

Like any day at Disney, there was a lot to do but not a lot of time to do it in, so I inevitably missed some things to do others. One of the primary things I chose to skip was standing in line to take a photo with a Star Wars backdrop. The one I vividly remember seeing was Jabba’s Palace, which looked remarkably similar to the backdrop used for Star Wars: The Dark Side Half Marathon Weekend. There were 6 backdrops scattered throughout the park, and lines looked like they ranged from 15 – 45 minutes.

Although I didn’t take time for a photo at these spots, I did take time to collect a sticker from each photo op stop for my Galactic Nights souvenir credential (given to us on a lanyard as we entered the park). Be sure to gather all the stickers around the park and put together the puzzle; your badge becomes part of the show during fireworks. 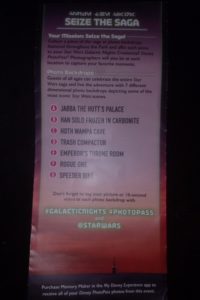 The list of photo backgrounds. Visit each to collect all the pieces of the puzzle 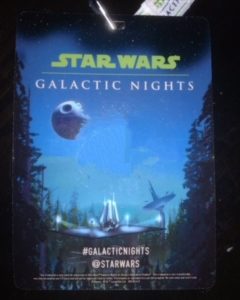 Special credentials for the event 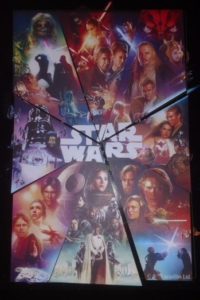 Collect all the pieces, and complete the puzzle!

I did not want to go completely without photos, so I stopped by the Launch Bay and got to meet some great characters! Kylo Ren and Chewbacca were of course in their normal areas, but scattered through the bay were other Star Wars characters. Getting a photo with Boba Fett was a highlight for me, even as he attempted to turn me in for the bounty on all Jedi. 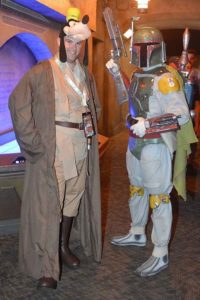 That night was also the official premiere of BB-8 in Launch Bay! As his first official night out in Hollywood Studios his line was a little longer than I wanted to wait (45 minutes estimated), but I caught up a week later during the Star Wars: The Dark Side Half Marathon. (You can read my review of the race, here.)  Meeting BB-8 is a thrill, as he interacts with you and may even answers some questions. Do not understand binary? While C-3PO is not around, BB-8’s handlers will help you communicate with him.

After Launch Bay we decided we wanted to catch the motorcade. It had Star Wars actors and celebrities like Ashley Eckstein (voice of Ahsoka Tano), Ray Park (Darth Maul), and Alan Tudyk (K2SO) and more! I planned on waiting for this like a 3 o’clock parade – by showing up an hour early if you want to see things. I was right, but I am not sure in hindsight it was the best use of our time. The motorcade quickly passed us, and having seen all of these celebrities at different times at Star Wars Celebration proper, I felt a little cheated that was all it was.

In talking with other fans later that night, I heard Ray Park saw a child dressed up as Darth Maul at the front of the crowd and stopped his car. Ray went up to the child, asked to borrow his lightsaber, and gave the fans a demonstration of light saber skills. It resembled the fight scene at the end of Phantom Menace, but just Darth Maul whirling his double-bladed lightsaber around. The reason I share that story is I would have had a very different opinion if I had gotten to video Ray Park whirling a lightsaber around, as opposed to a bunch of cars pass by with waving celebrities. 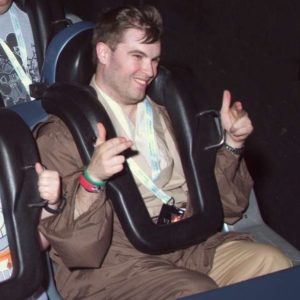 Rockin’ Rollercoaster was next! They had rethemed the ride to resemble Star Wars. All the posters in the queue were landscapes of different Star Wars locales, and the sign at the start of the ride was all about blasting off into Hyperspace. The lights inside the ride were off, so you do not see the Hollywood and Los Angeles signs. Instead we got Star Wars music and a fun, completely dark rollercoaster ride. As a Rockin’ Rollercoaster fan I loved it for the change, but as with most of the night didn’t want to spend the time for a second ride.

One thing I didn’t get to, but heard was fun, was the “Inside the Saga: Celebrity Chat Show” hosted by Vanessa Marshall (Hera Syndulla) and included celebrities who were in the motorcade. I feel this would’ve been more fun than waiting an hour for the motorcade.

Finally, as the night wrapped up I took time to relax and enjoy the Star Wars fireworks show. The show was mostly the typical Star Wars: Galactic Spectacular that Hollywood Studios had run before, but is special when done with several thousand Star Wars fans, and we all got to use our badges to be part of the show!

What was the best part of the night? Dressing up. I have never gotten to go to Walt Disney World in costume, since rules restrict adults from wearing character-like costumes. Going as a Jedi was a real treat for me, and when I donned my Goofy hat cast members and fellow fans told me I was the goofiest Jedi they had ever seen!  The best part of wearing a costume had to be when two kids saw me and one looked up and asked her dad, “Can we be Jedi like Goofy?” Yeah, Star Wars is a special crowd.

Bring money for the treats. There are no free food items like some WDW parties, but man those Dark Side Cupcakes are DELICIOUS! (You may want to consider purchasing the Tasting Sampler and Viewing Package)

Dress up. It’s more fun to be in costume than not – you get more reactions from cast members and characters this way.

Even with a ticketed event some lines were 30 – 45 minutes long (Star Tours and photo ops were the worst lines.) Plan your time wisely.

I had a great time and am so happy I decided to attend the first Star Wars: Galactic Nights. What about you?  Will you be attending the upcoming event?

If you want help booking your Walt Disney World vacation, be sure to contact the Disney Diva and Devos travel agent, Patricia at All for Dreams Travel. Her services are FREE and she will make sure you don’t end up on Hoth!