House-made S’mores at The Ganachery in Disney Springs: Get Ready to Stuff Some Chocolate in Your Face! 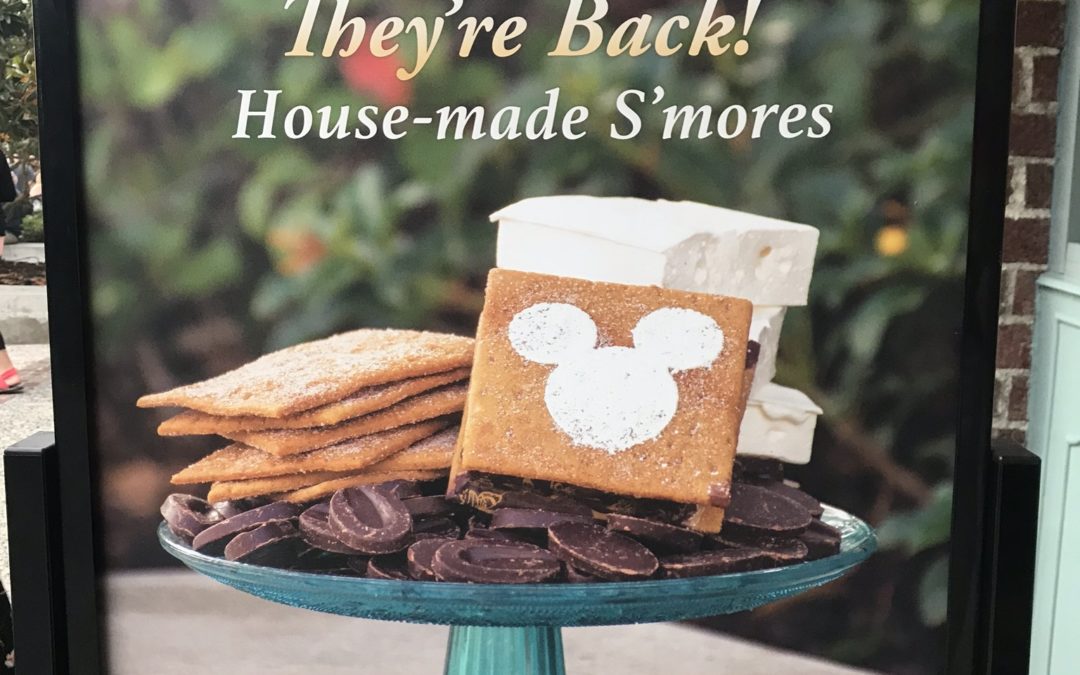 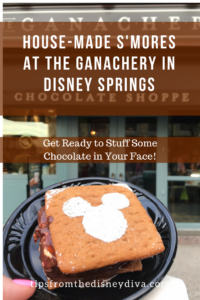 If you know me, then you know I’m a huge chocolate fan. Like Anna, most days I just wanna stuff some chocolate in my face.  So you won’t be surprised to learn one of my “must-dos” at Disney Springs is to stop by The Ganachery.   (You can read about my first visit, here.)

On my last visit, I was excited to try their House-made Smore’s. They aren’t always available, so when I saw the sign outside which announced they were back, I was eager to rush right in and, well, stuff some chocolate in my face!

Ordering a House-made S’more is an experience in itself. I told the cashier I’d like to order one, and she asked what my favorite Disney character was.  I was a little puzzled, and blurted out “Minnie.”  I know…why didn’t I say Anna!??  I paid for the s’more ($8 – and the Disney Dining Plan is NOT accepted), and she handed me an adorable hand-drawn sign which said “Minnie Mouse” and had a cute bow on it.  She then told me to just hold it up in front of the window of the candy-kitchen where all the scrumptious chocolates are made on-site. 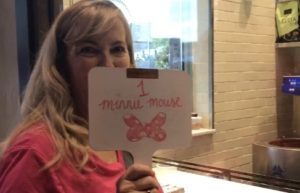 Soon a cast-member saw my sign and got to work making my s’more, right before my eyes. Actually, it was my eyes and and those of about 10 other chocolate lovers who were in the shop.  It turned into quite a show!

The first step was to take a house-made graham cracker and spread some ooey-gooey salted caramel ganache on it. (What a wonderful bonus!)  The production really began when he lit up the blow torch, and started browning the marshmallow.  Now, this isn’t just an ordinary marshmallow. 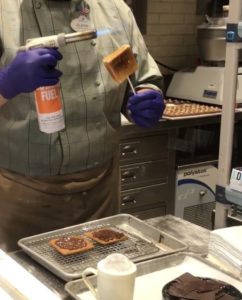 It was probably 1 ½ -2 inches thick, square, with a hint of vanilla bean flavor and just as big as the graham cracker.  The cast member slowly toasted it to a golden brown perfection, caramelizing the sugar, and finally placed it on the salted caramel ganache.  Oh my.  Is your mouth watering yet?

As the marshmallow rested on the ganache, the next step was to top it with a somewhat thin but oh so decadent square of specially made dark chocolate made from 65% cocoa. (Did I mention dark chocolate is my absolute favorite?) 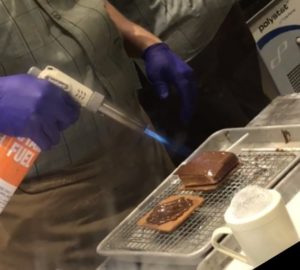 The show continued when the cast member used the blow torch once again to heat the dark chocolate. As I watched it melt over the golden brown marshmallow square, I wondered if anyone would notice if I began to drool.  Seeing the chocolate ooze down the side of the marshmallow definitely had my mouth watering.  You can watch a video of the entire process on our YouTube channel!

Once the chocolate was melted, my s’more was topped off with another graham cracker square. Then the final touch was added –  a powdered sugar stencil of Mickey Mouse!  The cast member motioned for me to meet him at the kitchen door, where I happily accepted my house-made s’more from him. 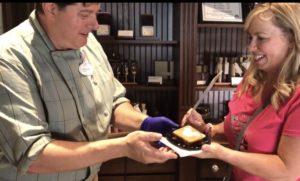 We could hardly wait to step outside and dig into the s’more! It was huge – so thick it was a little difficult to take a bite!  But I channeled my inner Anna and stuffed my face with that amazing chocolate!  And I was not disappointed!!  It was unbelievably delicious!!  The graham cracker was soft with a hint of cinnamon – so much tastier than a typical store-bought graham cracker.  I could hardly taste the salted caramel flavor in the ganache, but the marshmallow and dark chocolate were definitely flavorful.  And really – as long as there’s chocolate, I’m all in.  Like any s’more, it was a bit of a challenge to eat, and unfortunately The Ganachery doesn’t have forks, but I persisted and was able to stuff every scrumptious morsel of that s’more in my face! 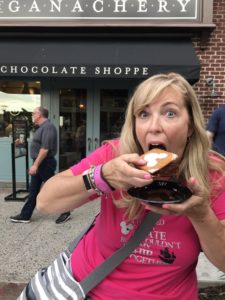 Several napkins later, I had licked every drop off my fingers, and was ready to get s’more, but alas it was time to move on to our next destination.  I guess I’ll just need to make another trip to Disney Springs!

If you’re ready stuff your face with a House-made S’more from The Ganachery, contact Patricia at All for Dreams Travel. Then be sure to get in touch with me, because I’m ready for s’more chocolate!