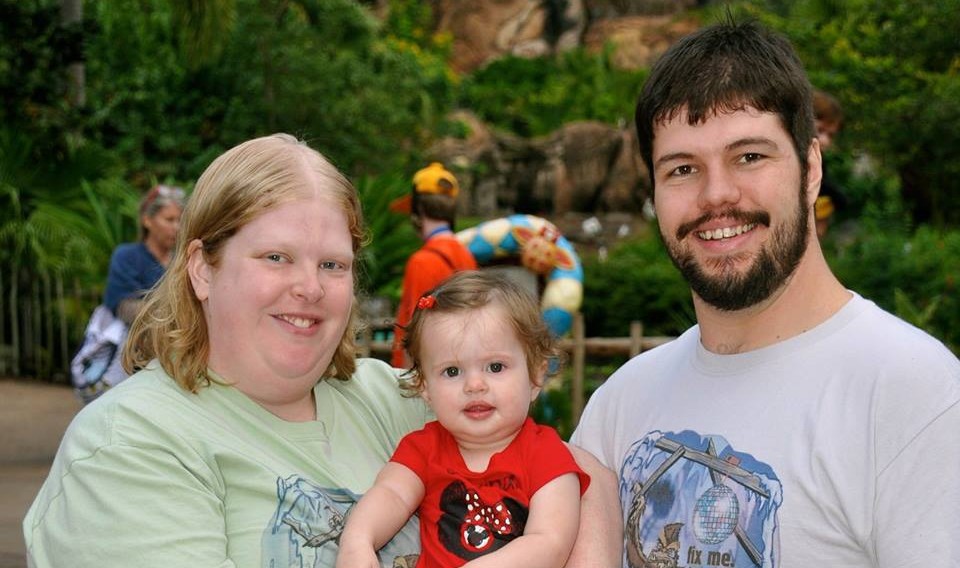 My family and I have visited Walt Disney World since I was 9 years old. So that at this point, I’ve done just about everything there is to do in the parks (not including the water parks). My husband, however, had never been until after we got married, so there were very few things we got to experience for the first time together. There are still a few things I haven’t done- visiting the water parks for example- so I tried to make a list of those before our last visit so we could experience a couple of “firsts” together. One of the most fun “firsts” to tackle was to visit all 4 parks in 1 day. We didn’t actually set out with the intention to do it, but it ended up being a great time.

Our day started at Animal Kingdom. 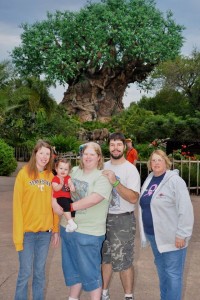 It was a rainy day, so the crowds were light. Being the seasoned veterans we are, we just donned some ponchos and enjoyed the reduced wait times for everything. It actually ending up being a great day to be in the parks- the sky remained dark, but the rain was pretty sporadic by the middle of the day. We got to introduce my daughter to several characters without waiting at all- and they let us spend a little extra time letting her warm up to them since nobody else was in line. 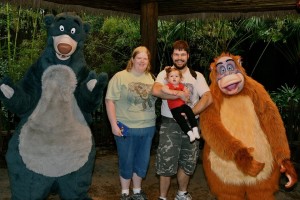 One of my favorite things to do at Animal Kingdom is snag one of the latest reservations available at Yak and Yeti.  The food is outstanding, and eating later allowed us to spend as much time in the park as possible since they used to close around dusk and we tend to visit in the late fall/early winter when the days are pretty short. I also like leaving after the park has been closed awhile- you feel like you have the place to yourself and can snap a couple of cool pictures of a mostly empty park if you’re fast enough. On this day, we weren’t able to get one for right at park closing, but we came pretty close. By the time we were done with dinner, the park was closed, but it was only about 6:30pm.

After dinner, my Mom and sister were ready to head back to the resort to relax and check on my father who wasn’t feeling well and hadn’t joined us in the park that day. My husband and I decided to head over to Hollywood Studios to catch Fantasmic since we had park hoppers and it was still fairly early in the evening. Mom generously offered to take our daughter back to the resort with them so my husband and I could have a little Disney date night.

We got to Hollywood Studios with plenty of time to get a good seat for Fantasmic. It had started to rain again right as we left Animal Kingdom, but luckily by the time they started seating for the show the rain had cleared out and they were able to run as scheduled. Due to the rain and having to keep my camera wrapped up to protect it, I only have one picture from that park, which I snapped with my cell phone to send to a friend. Had I known we would end up in all 4 parks that day, I would have found a photo pass photographer to document our stop to Hollywood Studios. 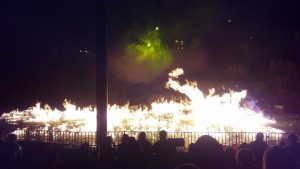 After Fantasmic was over, we debated going back to the room to rest. We had early breakfast reservations at Crystal Palace the next morning and I decided that I wanted to get a pair of Mickey Ears with my daughter’s name on them so I could take her picture wearing them in front of Cinderella’s castle before the park opened and it got crowded. Unfortunately, Hollywood Studios had closed by the time I decided this. Magic Kingdom, however, had extra magic hours that night and would be open quite late. Park Hoppers in hand, we decided to head there to get the ears. While we were walking to the bus stop, I pointed out to my husband that we were heading to our third park of the day and suggested we have a little fun and try to add in a stop to Epcot so we could say we went to all of the parks.

Once we agreed on a plan, we headed to Epcot since they would be the next park to close. We arrived in time to ride Spaceship Earth and watch some of Illuminations of Earth (we left before it was over to avoid a crowd on the monorail). 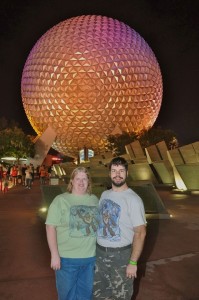 From Epcot, we hopped on the monorail and headed over to the Magic Kingdom. We bought my daughter her Mickey ears from The Chapeau and then debated whether to walk back further in the park and ride something or head back to the resort to rest. While we were discussing our options, we looked over in a corner and saw Mr. Smee doing a character meet-and-greet. I had never seen him in the parks before, there was no line, and he’s one of my husband’s favorite characters, so we jumped on the chance to meet him. 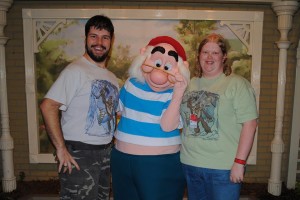 After meeting Mr. Smee, we decided to call it a night and head back to the resort for some much-needed rest. It may not have been intentional at first, but it ended up being one of the most fun date nights we’ve ever had.