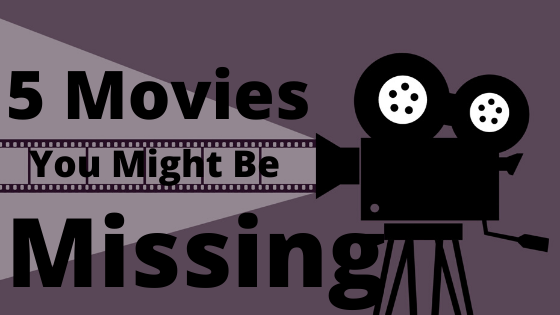 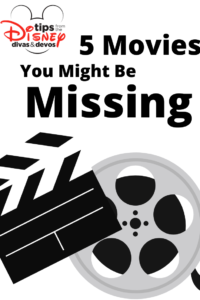 Oh hey! This picture would be perfect for Pinterest!

If you are anything like me then you may find it hard to leave Disney+. It’s easily my favorite streaming service now and a big part of that is the huge selection of movies available- from animated classics like Snow White to Avengers!. Thing is though, with this huge selection of movies I do believe that some gems are going unwatched. So do yourself a favor and watch these, will ya?

Godolphin College has just hired a new Track and Field coach to try to save the failing track team. The trick here though is that Godolphin is the supposed town where Blackbeard was laid to rest. Or was he?

When Coach Walker finds an old spellbook, he unintentionally releases the infamous pirate’s spirit out of purgatory. Blackbeard will now haunt Walker forever unless the pirate can show some ounce of human goodness to allow him to move into the next world. 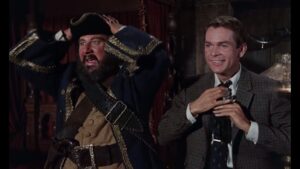 The Cast (pictured Peter Ustinov as Blackbeard and Dean Jones as Coach Walker) provides an excellent and hilarious performance that keeps my family coming back about 2-4 times a year to watch it again! Image presented for promotion.

This one is a personal favorite of my family and it’s suitable for all ages. It’s silly, well-acted, and it’s an overall good time that I don’t think gets enough attention. Check it out if you like comedy, stories about pirates, or old classics like “The Love Bug” and “The Parent Trap.”

Have you seen the Robin Williams movie Flubber? Did you know that was a remake of an older movie? The Absent-Minded Professor tells the story of a professor at a struggling college. He invents a new perpetual energy matrix but missed his wedding to do so. Now his girl is going out with some fancy-pants English professor from a rival school. On top of that, we have the US military and private investors trying to steal Flubber.

While this movie has a much more modern take starring one of the best comedy actors ever, this older version is worth a watch. The climax is (in my opinion) more extreme and the movie has more ironic humor than the slapstick “Home Alone” style violence of the Robin Williams film.

This one is appropriate for all ages and there’s enough here to keep even younger kids entertained once you get them past the idea that it’s black and white. 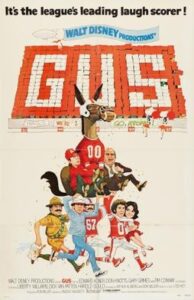 Arthur, a farmboy from Yugoslavia, has an older brother who is a soccer star. Arthur doesn’t have the capacity for sports it seems. But his mule Gus does! Gus has an accurate kick of about 100 meters which makes headlines. Now Arthur and Gus find themselves the star players on a struggling California football team!

This is another all-ages comedy that was a real kick (oops. A pun. I’m sorry) with my family. Similar movies include “The Apple Dumpling Gang” and “Air Bud”.  This movie also stars actors like Don Knotts and Bob Crane, a fun easter egg to you fans of classic TV.

Speaking of sports- baseball! “Rookie of the Year” is about a boy named Henry. He gets distracted by a cute girl and trips on a baseball which tightens all of the tendons in his arm. Now, this elementary school kid can throw a consistent 90 MPH fastball!

The Chicago Cubs immediately sign him and this kid is now thrown into the life of a major league team. He gets caught in the drama of managers, coaches, trainers, owners and his teammates who find his child-like nature bizarre, but maybe also refreshing?

This is a coming-of-age comedy that I think would be appropriate for a PG type of audience. It’s heartwarming and, by virtue of it being made by Fox, has a somewhat different flavor than you might be used to. Similar movies would include “The Sandlot” and “Angels in the Outfield”. 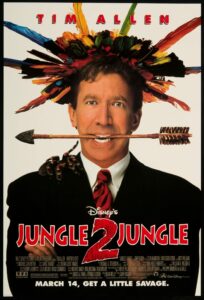 This is one of my old favorites and now it’s super accessible on Disney+. Watch it, will ya? Poster presented for promotion.

Tim Allen (half of my favorite movie duo) stars as Michael Cromwell, a Wall Street broker. He takes a trip to the Amazon to find his ex-wife and finalize his divorce so he can marry this new woman in his life. Along the way through, he learns he has a teenage son, Mimi-Siku,  that has been raised in the jungle. Now Mimi-Siku has a task to bring back the fire from the Statue of Liberty to become a man in his tribe.

It’s a clashing of culture and ideas as Michael struggles to teach his son how to survive in the urban jungle as well as evade a trade deal that went south with the Russian mafia. Yeah. It’s fun. and if you like any of Tim Allen’s other work like “The Santa Clause” or “Home Improvement” then this fits right in there.

So my question for you today is this: what is a movie you think people are missing out on? Leave your thoughts down below, thank you for sharing with your friends and remember to keep wishing on stars.