5 Things I Learned from Attending My First D23 Fan Event 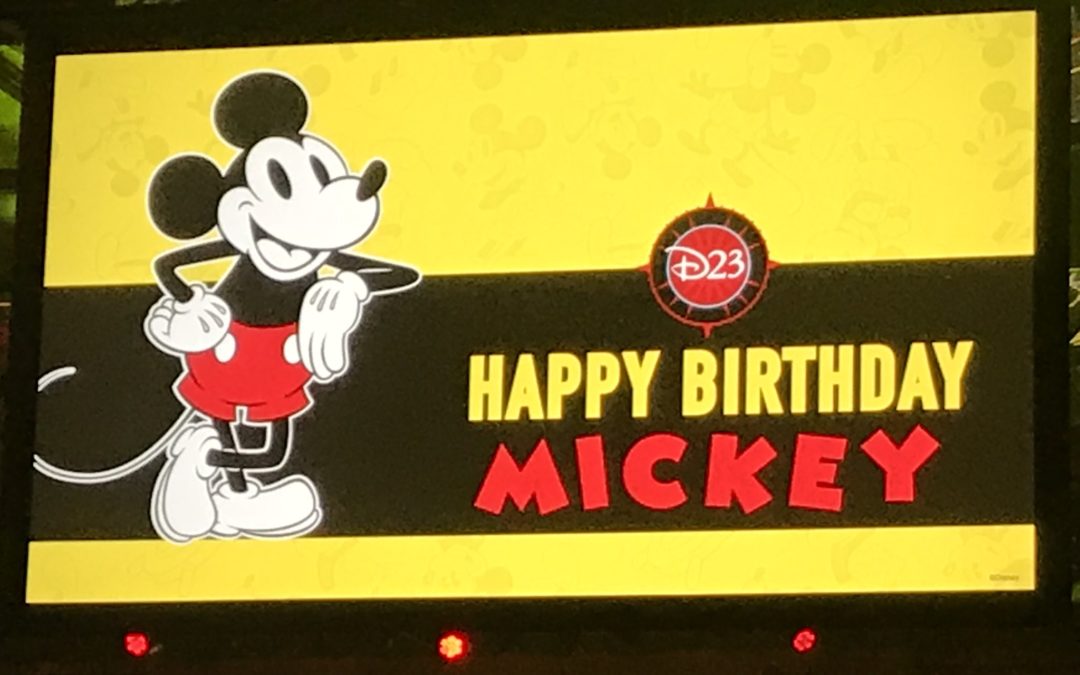 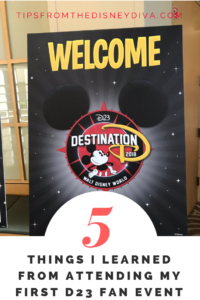 As I write this, I just got home from my first D23 fan event, Destination D: Celebrating Mickey Mouse. It was a whirlwind two days at Disney’s Contemporary Resort at Walt Disney World Resort.

For Disney newbies, D23 is The Official Disney Fan Club. Membership is open to anyone who loves the Mouse, and you can purchase either an individual or family membership. Members are eligible to purchase tickets to special D23 events held around the country, although the vast majority of events are held in California or Florida.

The most well-known event hosted by D23 is probably the D23 Expo held every other year, usually in Anaheim. Typically, Disney executives make major announcements at the D23 Expo, and it’s attended by thousands of fans.  (You can read about Pin Trading Diva’s experience at a D23 Expo here.) Destination D: Celebrating Mickey Mouse was promoted as a celebration of all things Mickey in conjunction with his 90th birthday. With panel discussions, sneak peeks, special merchandise, and lots of surprises, it seemed like it would be a chance to attend a mini Expo.

As a newbie to this kind of event, it was an eye-opening experience for me. Here are 5 things I learned about attending.

We arrived to check in and found a queue. It is Disney after all, so we weren’t surprised. About 15 minutes later we had our credentials and some nice swag, then headed to the next queue – Trading-Pin pick up.

As is customary for runDisney events, prior to the opening date of Destination D: Celebrating Mickey Mouse we were given the option to pre-purchase merchandise, specifically trading pins. My husband enjoys collecting pins (I’m not sure he’s ever actually traded), so we ordered a few online. After we had officially checked in, we were directed to another queue to pick up our pins. That was about 25 minutes.

Finally, it was time to head to the special pop-up shop with exclusive merchandise we could purchase. I was especially excited to see what might be available, since we didn’t have any information as what to expect. What I wasn’t excited about was the 90 minute queue we faced. You know this was an event for true Disney fans, because they we were, hundreds of people waiting in line for the chance to spend money on unknown, unseen merchandise. My husband was happy to find a shirt and I got exclusive Mickey and Minnie plush toys for the grandkids, but overall it was an exhausting experience.

Getting into the panels each session was also an exercise in patience. Each morning we had to queue up in holding rooms until the doors for the panels opened. As the start time approached, each holding room was dismissed into another, longer queue, to enter the ballroom. Switchbacks were marked with masking tape on the carpet; it was reminiscent of crowd control for parade or fireworks-viewing in the parks.

If you wanted a nice seat for the panel sessions, you needed to queue up well in advance. The ballroom was cleared after each morning and afternoon session, so we queued up multiple times each day. Heading into this event, I thought I’d be spending most of my time sitting. I was wrong. There was a lot of time standing in line, too.

Breaks aren’t ever as long as you think

Prior to the event, we were emailed information with a tentative schedule. Lunch and dinner breaks varied from 1 1/2 to 2 hours each day, so I thought we’d have plenty of time to eat – maybe even walk over to Magic Kingdom. Again, my naïveté showed. Sessions rarely ended on time, so our break was never as long as published. Couple that with the need to queue up well before the start of the next session and suddenly 90 minutes for lunch turned into more like 30. 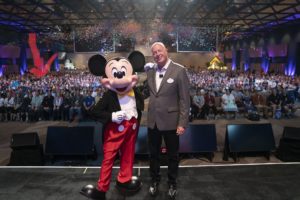 A selfie with Mickey and Bob Chapek, Chariman of Parks, Experiences, and Consumer Products at The Walt Disney Company. Can you see me under the red arrow?

Thankfully, Disney did set up a “grab and go” lunch and dinner area, although seating there was pretty limited. If you weren’t too particular about variety, you could get a meal and still get back in line in plenty of time for the next session.

It may be worth it to stay at the host hotel

Since this event was held at Disney’s Contemporary Resort, there was a group rate available. Unfortunately, it was not nearly enough of a discount for our budget so we chose to stay at Disney’s Pop Century Resort. The money we saved by doing so, we calculated, would almost be enough to pay for the entire trip.

We still think we made the correct decision for us, but a few times we certainly wished we had a room at Disney’s Contemporary Resort. It would have been so much more convenient to have a room we could return to during panel sessions we weren’t particularly interested in attending. It also would’ve saved immense time in transportation. Since we rely on Disney transportation, we had to allow lots of time for a bus to Magic Kingdom, then the walk to Disney’s Contemporary Resort. Add in the need to go through security before you get to the walkway, and our travel time from Disney’s Pop Century Resort to Disney’s Contemporary Resort was over an hour each day. Naturally we could have used a Minnie Van or a ride share, but we were really trying to economize on this trip.

When we travel with the grandkids, we always bring snacks with us everywhere we go. But when it’s just my husband and I, we try to travel extremely light – often we don’t even take a bag into the parks with us.  So since it was just the two of us on this trip, and we were just going to be sitting in a ballroom all day, it never occurred to me to bring snacks.  Again – I’ll know better next time.  Since it seemed as though we were always pressed for time during breaks, we never had much of a chance to get a snack.  It would have been so helpful to have brought some fruit, protein bars, etc. with us to snack on during the break.  Lesson learned.

They mean it when they say ‘No Recording’

Since many of the panel discussions at Destination D: Celebrating Mickey Mouse included never-before-released-information, it was common for an announcement to be made requesting guests put away any recording devices.  Several times I noticed security walking up and down the aisles, and, when necessary, asking people to put away their devices.

The most drastic of the “no devices” moments came during one of the evening presentations.  Since the topic for the evening was a sneak peek at Mary Poppins Returns, absolutely NO recording devices were allowed.  Several announcements had been made during the day regarding this “no devices” policy, and guests were even asked to leave them in their room. 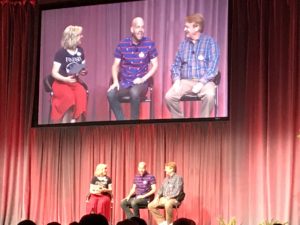 I was concerned as to what would be happening with our phones as we queued up that evening.  My apprehension was alleviated when I saw a metal detector and stacks of Tyvek-like bags.  How they would secure our phones became more obvious.  As we left our holding room, we were handed a TyVek bag, and told not to seal it yet.  As we approached the metal detector, Security asked each person to secure their recording devices (phone, smart-watch, etc) in the bag AS THEY WATCHED.  We were allowed to keep our bag, which was a huge relief. Having Security watch as we secured our phones and knowing it would be difficult to take a phone out during the presentation without alerting Security really emphasized how serious Disney was about the “No Recording” policy.

If I ever have the opportunity to attend another D23 event, I’m certain I’ll be more prepared. Many of the attendees had obviously been to many previous events, and they were very helpful and happy to share their experiences.  Not unlike a first trip to a Disney park, the event was exhilarating, overwhelming, exhausting, and unforgettable.  We were treated to fun gifts, behind the scenes information, sneak peeks at many upcoming releases, and the chance to hear directly from several Disney legends, experts, and executives.  I’d unquestionably do it all over again!  In fact, it’s only 8 months until the D23 Expo!

Are you ready to attend a D23 event? Patricia at All for Dreams Travel can book your trip for you!  Contact her today for a free quote!