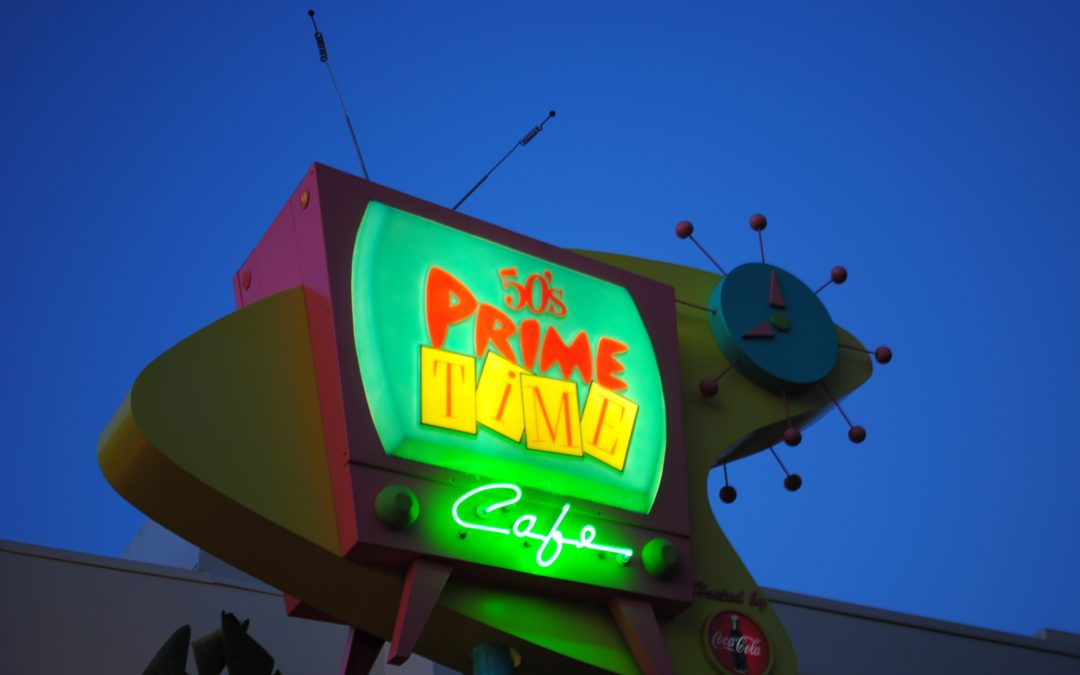 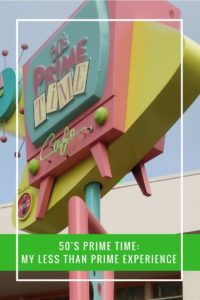 It’s extremely rare for my family to have a bad dining experience at Walt Disney World. We’ve had a few less than stellar meals over the years, but nothing that would make us avoid dining at that restaurant on our next trip. I realize that every restaurant has an off night now and again, even at Disney, but our last experience at 50’s Prime Time was so unsatisfactory that I can’t see myself wanting to eat there again any time soon. In the past, 50’s Prime Time has been one of my father’s favorite restaurants, especially at Hollywood Studios, which I feel is seriously lacking in table service options. We’d noticed a slow decline in our dining experience there over the years- particularly when it comes to the servers choosing not to stay in character. However, nothing could have prepared us for the disaster that was our last meal there.

It all started with our Advance Dining Reservation. As always, we arrived about 10 mins before our reservation to make sure we were on time. We checked in with the hostess stand and noticed the lobby was particularly crowded. This wasn’t a huge surprise- a huge storm had just blown through and nobody wanted to wait for their table out in the rain. 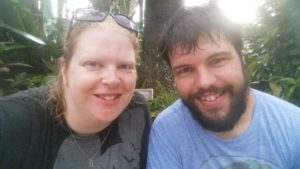 The aftermath of the rain

When we arrived and checked in, nothing was said about an extended wait, we just went through the normal check-in process. We went outside to wait for our table, since the rain had passed and there was nowhere to sit in the lobby. When it reached 30 mins passed our reservation time, we began to fear that we had missed hearing our name called, so I went inside to check. The Cast Member at the check-in stand told me we had not missed our name, that we were still on the list and it should be “any minute”. At 45 mins, my father went in to check as we were beginning to think about figuring out something else for dinner, and he was given the same “any minute” time frame. At one hour past our reservation time, I went inside to let them know we were tired of waiting and to take our name off the list, and they said they were just about to call our name and had a table available. In hindsight, we should have passed and found some counter service option for dinner. It was our only day at Hollywood Studios, and we were trying to make sure we made Fantasmic. Waiting so long for a table had put us dangerously close to not having enough time to eat and make the show, but since we had some reserved passes from breakfast that morning we felt there was still time to do both. 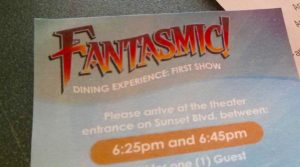 Once we were seated, our waitress was the one bright spot of the evening. We explained to her that we had waited an hour past our reservation for a table and were in a time crunch, and she offered to put all of our courses in at once so we could expedite things. She was actually in character and it was fun to banter back and forth with her a bit.

Although our waitress took our order quickly, but apparently the kitchen was in no rush, and it took almost 45 more minutes to get any food. While we were waiting for our entrees, we noticed a manager delivering food to a nearby table and I called him over. I explained to him why we were not having a very good experience and inquired about cancelling our entrees and dessert and just paying for the drinks out-of-pocket and leaving so we wouldn’t miss Fantasmic. The manager told us he would expedite our food and asked how many of us planned to see Fantasmic. He said he would call over to Fantasmic and have them save us seats, that we could arrive just a few minutes before the show and still have a seat. He took our name and party size and handed me some of the reserved seating passes we had gotten at breakfast. I questioned him, since the passes advised arriving 30-45 mins before the show and we would be there later than that. The manager told me that his call would negate the need to arrive that early, all we had to do was hand them the pass when we arrived and they’d let us in.

We finally received our food and it was mediocre at best. We’ve eaten at 50’s Prime Time before and in the past found the food to be enjoyable. This time, the food was tepid and rather bland. The fried chicken was soggy and greasy, and the meatloaf just didn’t have much taste. It was really disappointing after everything we’d been through to get the food, but at this point it wasn’t much of a surprise. We ate what we could, shoveled down the dessert that came with our dining plan, and left the men to pay for the meal while the women tried to hurry across the park for Fantasmic.

When we arrived at Fantasmic and explained to the Cast Member out front that we had been instructed to show them our reserved seating passes and give our name, she had no idea what we were talking about. She directed us to a manager nearby who also had no idea what we were talking about. She advised us that the show was standing room only at this point, and we were welcome to walk up and stand, but there was no way for someone to reserve us seats and it was too late to use our passes. While we were walking back to the theater, my 3 yr old started crying and I was trying to call my husband who was still at 50’s Prime Time waiting to pay (like everything else about the meal, that took forever too). When we reached the stroller check, we found another Cast Member. I don’t know if it was the pregnant lady carrying the crying toddler, but something made that Cast Member take pity on us and ask how they could help. We explained everything again, and she was able to figure out that the manager at 50’s Prime Time gave us the wrong pass. She took us to a section that was only about 60% full and we were able to find seats just before the show started.

Although things worked out in the end, the experience certainly left a bitter taste in our mouths. If the food had been decent, we might have been willing to overlook the abysmal service, but it all came together to create a giant mess that I don’t ever care to repeat. Next time we visit Hollywood Studios, we’ll try one of the other table service restaurants or just eat counter service for dinner.