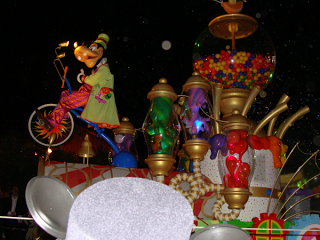 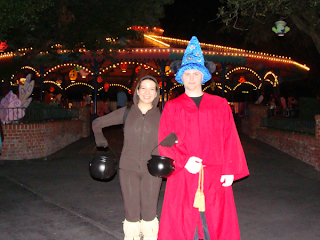 Halloween is my favorite holiday, and if you’ve ever visited Walt Disney World during this spooky time of year then it’s sure to be your favorite too.

You’re probably familiar with WDW’s Halloween event, Mickey’s Not-So-Scary Halloween Party, but today I’m going to share some shocking secrets that would frighten even the most grim grinning ghost in the Haunted Mansion. OK, maybe not. But these secrets are sure to get you in the Halloween “spirit.”
Hold on to your pumpkin Mickey ears!

You will regret it forever if you don’t dress like a Disney character.

I know, I know. It’s a hassle to pack a costume in your luggage. And what if it gets smashed up by TSA? It’s true that you can buy Halloween T shirts and props at the park, but it’s much more fun if you put in the effort to dress like a Disney character during the party.
My husband Chris and I dressed up like Sorcerer Mickey and the broom from Fantasia one year, and we had so much fun because we felt like a part of the magic. Guess who had to carry around the buckets of candy?
But the following year we were recovering from the flu and didn’t have the energy to wear costumes to the party. We immediately regretted it when we got to the park. True Disney fans plan their costumes months in advance, and it’s obvious how much Disney means to their lives. Sure, we still got a ton of candy, but the entire night felt “off” somehow and a little less magical.
And speaking of candy… 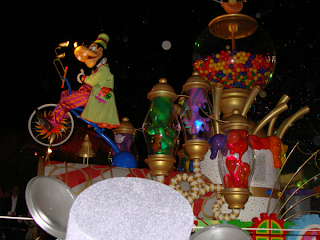 Candy will become your all-consuming obsession.

It doesn’t matter if you’re 8 or 80, but sometime during the party a switch will be flipped in your brain and you will become a candy monster.
Remember how Ariel became so obsessed with human thingamabobs that she would do anything to get more even if she put herself in danger of being eaten by a shark? Yeah, you’ll feel like that except your dinglehoppers will be Tootsie Pops and Starbursts.
In fact, you won’t care that you could go to the nearest drugstore and get the same cheap candy because somehow it feels more special when you’re in the Magic Kingdom. And if you’re not careful, you might get hauled away by Disney security for trying to carjack Goofy’s candy mobile during the Boo-to-You Parade. (It would be worth it, though.) 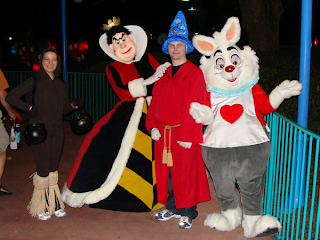 The characters are extra sassy.


Halloween brings out everyone’s inner villain, and your favorite characters might give you more tricks than treats. It’s all in good fun, but be sure to hold on to your candy extra tight during the character meet-n-greets.
And if you’re dressed up as a Disney character (you ARE right?), you’ll be expected to act appropriately. When Alice saw my husband dressed as Sorcerer Mickey, she tried to pull him out of the candy line and told him to rush over to Hollywood Studios or else the Fantasmic show would be canceled without him.
Not only do the good guys act sassy, but the villains crank up the naughtiness too. Just take a look at the Queen of Hearts trying to steal my husband and shoving me to the side of the picture! I’m plotting my elaborate revenge that involves red paint and her rose garden… 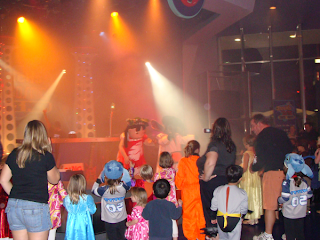 You will dance like a dork and love it.

Mickey’s Not-So-Scary Halloween party is truly out of this world with the help of Stitch’s Club 626 Dance Party. I have a theory that there’s a subliminal message hidden in the music that makes everyone—young and old—start dancing like Halloween fools.
Here’s the thing: you might think you dance as graceful as Esmeralda  but you’ll really look like Bambi learning how to walk. Thankfully, this is Walt Disney World, and you can let your inner dork out and enjoy yourself. Don’t forget to boogie with Oogie Boogie during the HalloWishes fireworks show. 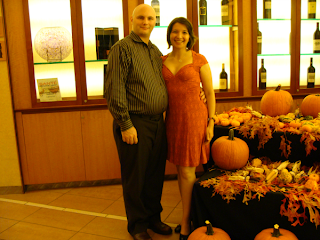 Halloween can be a classy occasion.

As the DINK (dual income no kids) Diva, I like to plan a romantic date night with my husband during each Disney vacation. Halloween is no exception, and you’ll find Halloween decor and seasonal menu items at some of your favorite restaurants. Chris and I had dinner at the California Grill on Halloween, and I was able to get my glam on and wear a pretty orange dress for the occasion.
Your favorite characters will be dressed to the nines too. They’ll be wearing Halloween costumes, but they look just as detailed and expensive as anything you’d expect from Disney. 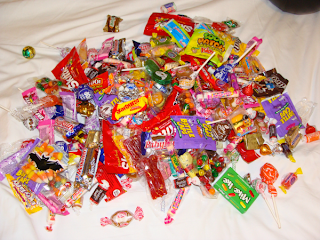 There must be a disturbance in the fabric of time inside the Magic Kingdom because Mickey’s Not-So-Scary Halloween party always ends too soon. It’ll be midnight before you know it, and all the costumed guests will grudgingly hobble back to the monorail like zombies.
Later in your resort hotel room when you’re sorting through your candy, you’ll realize that the chocolates and lollipops don’t compare to the best treat of all: making memories with your loved ones thanks to the magic of Disney.
Share this...