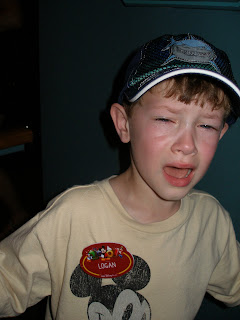 I have a friend (who I love) who went down at Disney World recently. I got a message from her around noon that they were just now heading to the parks. Needless to say I shook my head.

Disney is the one place where planning is non-negotiable. The people who have a miserable time at Disney World are the ones who just show up and wander around, or stupidly stand in hour + lines at Splash Mountain.

People who “never want to go back to Disney World” most likely committed one of the 7 deadly sins of WDW vacationing! Those sins are: Wrath, Greed, Sloth, Pride, Lust, Envy & Gluttony.

Wrath – People who hate WDW spend a large amount of time yelling at (or being yelled at by) their families & friends. They don’t listen to the Disney Diva and take mid-day naps, nor do they take the steps to head off WDW Melt-Downs before they happen(* READ TIPS HERE*). They are exhausted, broke, disillusioned and overstimulated. They don’t see Disney World as a vacation so much as as a giant, never-ending checklist of rides they must ride, foods they must eat, and things they must see before they can be considered a “good parent”.

There are three tips to avoiding committing these sins: 1) Plan in advance (and include your kids in planning (read How your kids can SAVE you money at Disney World HERE), 2) know your way around the park. and 3) Set realistic goals and take mid-day naps.

Greed – People who hate WDW spend too much money unnecessarily. They don’t really think ahead about how much room they need, or how close they need to be to a park(get help on this Planning your WDW post). They don’t make good choices on what they should pack both in their suitcases (Packing Checklists) or in their day backpack (Perfect WDW backpack) which forces them to have to spend money in-park on essentials such as suntan-lotion or sweatshirts. They don’t set impulse-buy budgets for themselves or their children so they come home to an astronomical credit card bill and a glazed over look while exclaiming how to everyone “expensive everything at Disney World is”.
How do you avoid this sin? PLAN PLAN PLAN. Set budgets for yourself and your family. Think about if its really worth the additional to be on the monorail loop or could you tolerate a longer bus ride? Too many people take the position of “this is a once in a lifetime trip, lets spend every dime we’ve got”. Don’t do it. Stuff for the sake of stuff just ends up in a yard-sale in a year or two. Spend more on creating memories and less on stuff.

Sloth – Sleeping in…Sleeping in makes me beyond furious. You absolutely must not… MUST NOT sleep in!! People who hate WDW stroll into a park at about 10:00 or 11:00 in the morning, right when lines are starting to get long. Then they have the nerve to complain about how all the lines are insanely long. They don’t think its important to be there for park opening. Sleeping in is a no no at WDW.

Now I understand that some people have teenagers, and that it’s similar to trying to wake the dead to get them up at that time so here’s my caveat, if you have teenagers… AND you’ve been to Walt Disney World multiple times… AND you don’t trust your teens enough to get themselves on the bus and meet you at a park later in the day… THEN you can go to the parks late. Its actually very safe to let your teens travel using Disney transportation. They’re unlikely to get lost unless they’ve totally got no sense at all and hop the wrong bus. But even then, with their hopeless cell phone addictions you should be able to right their wrongs in no times. Especially if you’ve got a younger child, don’t sacrifice their trip full of magic for your night-owl teen.

So how do you avoid this sin? TAKE mid-day naps!! Lines are shortest at the beginning and the ending of the day, which means THAT’S when you should be in the parks. Not in the heat of the day and DEFINITELY not at 3:00pm which is the “witching hour” in which everybody at Walt Disney World MELTS DOWN.

Pride – People who hate WDW don’t allow their plans to change. They have their pride and are unwilling to change things around even when everybody has said their tired, or they hate this park. On days when they finish a park a lot faster than they planned they still require people to return to the park as scheduled. They don’t allow the flexibility for an unplanned parade dance-along or get a last minute dining reservation.

How to avoid? Don’t be a WDW Nazi! Have some flexibility!

Lust – The only way I can think to tie in Lust is to talk about people worrying about how they look while they’re at WDW. Remember Disney World is NOT a fashion show. People who are worried about how they look make stupid mistakes like not wearing clothes that are comfortable and breathe (its really humid at Disney World). They wear skirts, and high heels and spend large amounts of time doing their hair and make-up which will turn into a frizzy/cakey/runny mess by the end of hour one in the park.

How to avoid this sin? Realize Disney’s not a fashion show. You MUST be comfortable or you will be miserable. Pack smart!! and wear appropriate footwear! You can read all about it at my post about Hoofing it Around Disney World.

Envy – People who don’t use Fast Passes correctly experience large amounts of envy at Disney World! People who fall into huge Disney World Time Pitfalls experience even more. There are few things worse than standing in a queue line and watching, literally, hundreds of people get to ride the ride before you. Fast Pass Envy, its FIERCE and worse than most green-eyed monsters can be.
So how to avoid this sin? LEARN HOW TO USE FAST PASSES!! For Pete’s sake. Man it can really save you a ton of time and read that article on Avoiding Disney Time Pitfalls, it may be the best thing I’ve ever written.

Gluttony – If you are what you eat that you can turn into one fatty mess at Disney World! Be careful about eating too much fast food at Disney, too many sodas or stuffing yourself at one of the buffets (Buffets are staples at most of the Character Meals). You can really get run-down quickly without enough water and fiber in your diet. Don’t be tricked into thinking that the bazillion of miles you are walking are somehow how working off the calories you’re rapidly in-taking.
How to avoid glutton? Sit down and really plan out your meals and make sure you’re picking out some good places to get good for you foods and don’t shy away from the fruit stands.

Ok, so now you know about the 7 deadly sins!!! Don’t go committing them!!