A Change of Pace at Walt Disney World

Last month, I found myself in the Magic Kingdom, a place I have easily been 100 times before, trying a little change of pace. You see, this vacation was a little different from most. My wife was attending a work conference at the Grand Floridian and her employer was putting us up there on their dime. To say this was fantastic, both the accommodations, and the price point, would be an understatement. But it also meant a couple mornings roaming the parks solo as my wife attended seminars that I’m sure were just as exciting as riding Splash Mountain. So I found myself wandering the parks at a leisurely pace, trying to “save” our favorite attractions until she arrived a few hours later. I decided to see and do the things I normally didn’t do or in some cases, had never done before.

The first stop was Tom Sawyer Island, a section of the park I had never stepped foot on in my nearly 30 years of visiting. Getting to the island was an interesting experience, as the “rafts” that took you over were unlike any mode of Disney transportation. Once on the island, I realized what a large section of the park I had never seen before. The caves and windmills were great for little ones to burn off some excess energy, but I was really intrigued with the new views of the park the island offered, especially of the Haunted Mansion and Big Thunder Mountain. It was like a hidden oasis inside this busy theme park, and offered a new look at a place I thought I knew so well. I imagine with most people racing to the headliner attractions, Tom Sawyer Island doesn’t get a lot of foot traffic, but it’s worth a stop just for a change of pace. 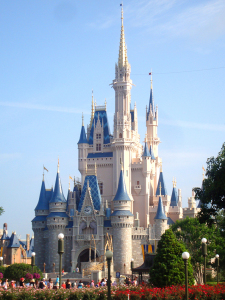 Next, I did something that might not seem that out-of-the-ordinary, but for me it was, and that was an early morning stop at the Main Street Bakery. Typically, my wife and I rush through breakfast at the hotel, hop onto the bus, arrive at the park for rope drop, and spend several hours packing in as many attractions as we can before our lunch ADRs. But on this day, as the salmon headed upstream toward Cinderella Castle, I hopped out of the current and sampled something from the bakery. It was incredibly relaxing to sit on a bench on Center Street and watch the mass of humanity stream into the park. I saw a lot of the Main Street performers I usually miss, and even saw a couple taking some very elaborate engagement photos on Main Street. My every instinct told me, “What are you doing?! Space Mountain is still a walk-on and you’re wasting your time on lemon bars!”, but I took it easy and changed it up for once. 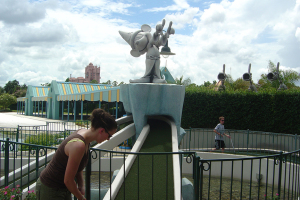 In general, I think its good to try and make time on every trip for knocking some out-of-way Disney thing off your bucket list. A couple trips ago, we left the park midday and headed to Fantasia Gardens minigolf course. Located outside the Swan Hotel, this course offers 18 fairly tricky holes. Each hole features characters and props from the film, and is one of the better minigolf courses I’ve been to. Not many people know the course even exists, and the day we went had zero wait time between holes. There is also a second minigolf course outside Blizzard Beach known as Winter Summerland, which is also well worth your time.

“How can you keep going back to Walt Disney World?” “Disney World again?” “Don’t you get bored going there again and again?”As an avid Disney Parks fan, you may have fielded these types of questions before. But even the most frequent and seasoned Disney World guest will find something new has debuted since their last trip, or might realized they’ve never actually seen a longtime park classic. It’s good to schedule some extra exploring time to visit other resorts, mini golf or even try the Characters in Flight Balloon in Downtown Disney. And if you frequently find yourself skipping the movies in World Showcase, the Animation Academy at Disney’s Hollywood Studios, the animal walking trails at Animal Kingdom or even classics like The Enchanted Tiki Room or Country Bear Jamboree, break from your usual routine and rediscover something new at the World.