A Pirates Life for Me- at Disneyland! 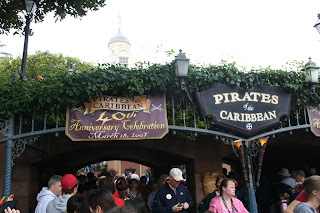 One of the most beloved attractions at Disneyland is the Pirates of the Caribbean ride in New Orleans Square. This ride has been the recipient of Imagineering updates in the past few years, but it has also stood the test of time: Much of the ride remains in its original 1960’s form when audio animatronics were just being created.

The history behind the creation of the Pirates of the Caribbean ride is a fascinating one. The ride is the last one that Walt Disney himself helped to design. It opened within months of his passing. Originally, the ride was designed to be a walk through attraction. At the time, the WED group (Imagineers of the past) was concerned about what to do about the train that essentially went through the ride (the Disneyland Railroad). It took a great deal of planning to make the Pirates of the Caribbean ride into the water boat adventure it is today! The train issue, by the way, was solved by having some of the ride travel underground via the waterfall drops.

Diva Tip: The lines may look long for this ride, but it loads fast!

The ride floats through a pirate adventure story, beginning with tales, and ending with treasure. Guests are given an inside glimpse inside the world of pirates, complete with gunfire, cannons, and sword fights all while listening to one catchy tune written by George Bruns and Xavier Atencio. Do not be surprised if you hear more than one person next to you singing ” Yo Ho (A Pirates Life for Me)” on the ride! 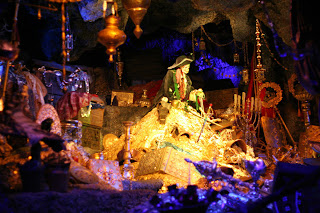 The pirate story begins in the bayou. There are fireflies (although many of these light bulbs are burned out and need to be replaced), and crickets. To the left of the boat guests will notice shacks, and to the right, what looks like the back of a plantation house. This is actually the Blue Bayou restaurant, one of the best places to eat at Disneyland (in my opinion). You can read a review of the restaurant here. Be aware, you will need Advanced Dining Reservations for this place. It is popular!

As the boat travels through the bayou, guests are brought into a dark tunnel where a skull and crossbones give them a warning about pirates and what they are about to see. It is then that guests hit the first waterfall drop! You may get a splash or two, so watch out! 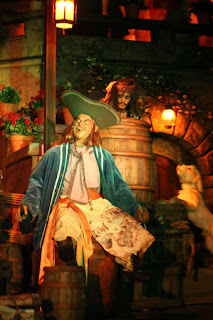 It is on the other side of the waterfall drop (with another smaller waterfall drop adding to the fun) where the pirates story begins to take shape. The original ride told the story of Captain Blackbeard, his pirate crew and their pillage and plunder of a port city on the quest to find treasure. The updated story introduces Captain Barbossa, Captain Jack Sparrow and Davy Jones, on their quest for treasure. Both stories intertwine nicely, and the introduction of Captain Jack Sparrow to the ride demonstrates the latest in audio animatronics- he looks very real!

Guests will enjoy the even boat ride as they observe pirates in all their glory- from looting, to drinking, and even trying to escape from jail!

Diva Tip: Be on the lookout for a very special effect involving Davy Jones.

The ride has a scare factor of 2, simply because of the water fall drops and the use of skeletons throughout the ride. My four year old son will not ride on Pirates of the Caribbean because of the drops, so that may tell you just how scary the skeletons are (not very scary). Guests in wheelchairs and scooters will need to enter through the exit and transfer to the boat.

Diva Tip: The Guest Assistance line for Pirates of the Caribbean can be very long, so you may want to visit the ride early in the day.