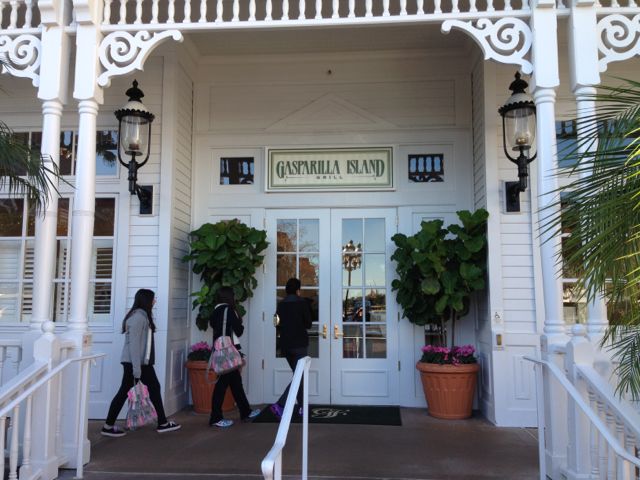 In January, while staying at the Villas at Disney’s Grand Floridian Resort, Barbie and I ate several meals at the resorts quick service restaurant, the Gasparilla Island Grill.

Gasparillas is a convenient and quiet spot to start the day, and we had breakfast here before heading to the parks on a few occasions. Breakfast is served until 11am.

It does get crowded, but we never had a problem finding an open table. Actually, we had a regular booth that we sat at during every visit.

Interestingly, this wasn’t always a quiet spot. While looking online at Disney’s Official Site, the photo that is featured shows several arcade games along the wall, so I was not expecting it to be as nice as it turned out to be. The games have been moved to their own separate arcade space located adjacent to the Grill during a refurbishment that took place starting back in 2012. I bring this up in case you do research and find that photo. Odd that Disney hasn’t updated their site.

The food offerings are standard Disney fare. There is an assortment of bagels, danishes, muffins and other pastries to choose from.

The menu board will help you make other choices, such as the Bounty Platter, Croissant Sandwich, or…

There are healthy choices as well, which can be found in the refrigerated section, such as fresh fruit, vegetables, and yogurt. My wife Barbie inexplicably chose some of these one morning. (Who eats healthy on vacation, really?!)

I had the pancakes on another morning, and they were very good.

We also had dinner here one evening.

The offerings include made to order sandwiches, such as the Grand Turkey, Ham and Swiss, and Roast Beef, burgers, pizzas, soups, and the aforementioned grab ‘n’ go items.

You can also create your own salads by choosing from Romaine Lettuce or Baby Greens and a variety of your favorite ingredients, adding Flank Steak or grilled chicken.

I had a Angus bacon cheeseburger that was very tasty, one of the better quick service burgers in my opinion. And the homemade potato chips are terrific. You can get cucumber salad instead of chips.

Barbie had the Margherita Flatbread, which is made with Mozzarella, Tomato, and Basil, which she really enjoyed.

There is also seating outdoors, and if you time it right, you can catch Wishes from the Magic Kingdom!

TIP : Gasparilla’s is open 24/7,  if you are hankering for, as Pooh would say, a smackeral after a long day at the park. Late night snacks include assorted pizzas and flatbreads, as well as sandwiches and desserts.

This article was originally posted on the Disney Musings Blog, which Nick co-writes with his wife and friends.