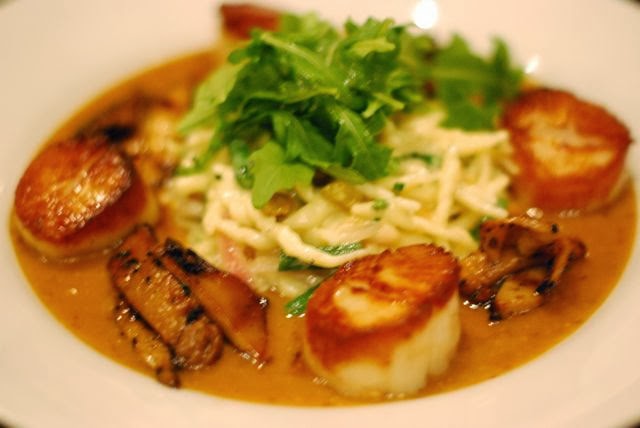 by: Nick the Disney Devo

Since becoming a blogger, I travel differently, keeping an eye out for interesting topics to write about.

Blogging also influences dining choices at restaurants. I usually try to choose different items than my wife, Barbie, so I have at least 2 menu selections to review.

This doesn’t always work out. When we visited the Yak and Yeti Restaurant at Disney’s Animal Kingdom on our trip in October of last year, we both ordered the Chicken Lo Mein. But at least I had other photos from previous trips to write about.What I’m getting to is this, the review of Narcoossee’s is going to be slim in the food review portion, because we both ordered the exact same thing, and as this was our first visit, there’s nothing else to fall back on.

Also, I apologize for how dark the photos are, the lighting in the evening at Narcoossee’s is pretty intimate.

Narcoossee’s is located on the shores of Seven Seas Lagoon, at the end of the Grand Floridian transportation boat dock.

TIP: Disney states there is a dress code. From Disney’s site:

Guests at this Signature Dining experience are asked to adhere to a business casual dress code. Men may wear slacks, jeans or dress shorts and collared shirts. Jackets are optional. Women may wear dresses, skirts or dress shorts with blouses or sweaters. Not permitted in the dining room are tank tops, swimsuits, swimsuit cover-ups, hats for gentlemen, cut-offs, torn clothing and shirts with offensive language or graphics.

I dressed in khakis and a sweater, Barbie a dress. Almost everyone wore much more casual clothes, we noted one girl in flip flops. I’m not saying you should dress down, I just wouldn’t let a lack of dressier clothes deter you from enjoying a meal here.

We gave our names at the podium, and were handed a pager. We decided to have a look at the menu, so headed for the bar area.

On the way, we passed the open kitchen and the wonderful staff. Be sure to say hello!

I was impressed with the beer menu, not overwhelming but a nice selection.

We asked the bartender for a food suggestion, and he said his favorite was the scallops.

As I perused the beer list, our pager went off. As we were being brought to our table, Barbie spotted a man wearing a vest covered in Disney pins. She approached him, and they spoke at length. He came over to introduce himself and his wife. They were locals, and they also suggested the scallops, as well as the calamari.

TIP: If you time it right, and have a table facing Cinderella Castle, you can see Wishes at the Magic Kingdom. I made our advanced dining reservation at 180 days out for 8:00 pm, thinking the fireworks would be at either 8:00 or 9:00 pm. They were at 10:00 pm that evening, and while I could have changed our ADR, we both agreed that was rather late for dinner.

The menu is somewhat limited. Not necessarily a bad thing, just and observation.

As our bread was being set on the table, we asked our server for an entree suggestion, and weren’t really surprised when she said the scallops.

The bread was very crunchy with a soft center, almost a sourdough. I love butter with salt, and this was course, better yet!

I thought it was very light and crispy yet tender, not chewy. The relish was just the right kick, and the tomato coulis was the perfect acidic addition. Barbie thought they were the best Calamari she’d ever had! With a salad, this could easily be an economical choice for an entree.

We both agreed these were the best scallops we’d ever had. They were perfectly prepared, and as good as they were, the pasta and mushrooms in the lemon-thyme-mustard au jus was even better. Shhhh, if  you listen carefully, you can hear my stomach growling now as I write this!

We would have loved dessert, but were too full! 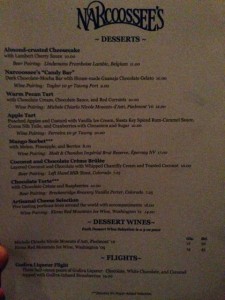 There is no doubt we will return to Narcoossee’s in the future, and we will try to choose different food selections, but it won’t be easy!

Portions of this article were originally posted on the Disney Musings Blog, which Nick co-writes with his wife, with contributions from friends.