A Review of Polite Pig BBQ in Disney Springs 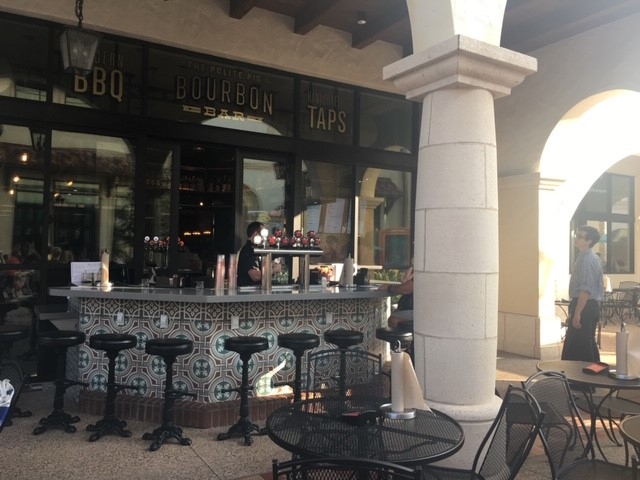 There are just a few counter service restaurants my family continues to return to at Disney Springs. One of them is Wolfgang Puck Express (we are especially fond of the breakfast here). My daughters also like Blaze Pizza. But a recent favorite has been the Polite Pig. We have eaten here about six or seven times over the past couple of years, and the food has never disappointed. 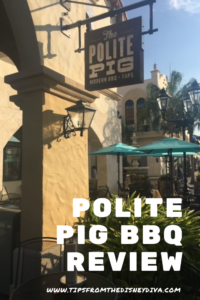 Located at the bottom of the escalator leading to the Lime Garage, the Polite Pig calls itself a “Modern BBQ + Taps” restaurant. It’s the third local venture between James and Judy Petrakis (and James’ brother Brian), James Beard-nominated owners of two other restaurants in nearby Winter Park. This is one of the things we like about this place – it’s not a chain, and while the cuisine isn’t incredibly unusual, there’s enough of a new spin on traditional barbecue to make it interesting. 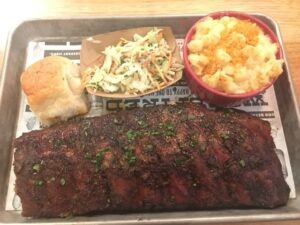 Baby Back Ribs with Mac and Cheese, slaw and a roll.

You stand in line and place your order at the counter and receive a pager type device that allows a cast member to find you when your food is ready. Then you grab a table (sometimes a challenge during busy times) in the large, air-conditioned main dining room and wait. You can also sit at the bar or at the recently expanded outside patio area.

We have liked pretty much everything we have ever tried here. My husband usually gets the BBQ Cheddar Sausage with a bourbon glaze ($15) which comes with a side. He inevitably gets the sweet potato tots, which are sprinkled with parmesan cheese giving it just the right touch of sweet/savory.

Tip: Polite Pig is one counter service credit on the Disney Dining Plan and is quite a good value since their entrees range from $11 all the way up to $23. 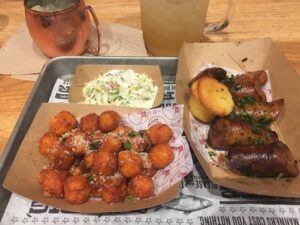 My daughter likes the pulled pork, which is listed as only being available as a sandwich, but we have been allowed to get it as a plate instead with no issues. We’ve also tried the Baby Back Ribs ($23). Portions are large and filling.

But the sides are really the king here, in my opinion. My favorites are the BBQ Cauliflower with Paprika Sour Cream and Candied Pepitas and the Crispy Brussel Sprouts with Whiskey Caramel. Other standouts are the Mac and Cheese and the Grilled Street Corn.

The only side I didn’t really care for was the Roasted Beets with smoked pecan granola, goat cheese, yogurt, and oranges. Sides are $6 each or you can pick 3 for $15. I usually can’t finish all three, and often split with someone else.

There are a variety of BBQ sauces to choose from at their Sauce Bar, but we have honestly never felt the need to add much to the seasonings that are already on the food. 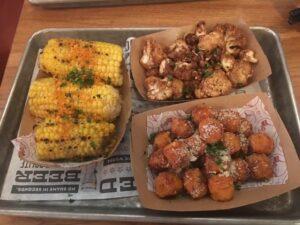 Somehow, although this is billed as a bourbon bar, we have never tried any of the numerous bourbons or whiskeys the restaurant offers. We did try a pitcher of one of their small batch cocktails ($27), the Moscow Mule, but we found it to be rather weak and watery, possibly because all the cocktails are on tap.

My husband much preferred his beer flight ($10) from another trip – Polite Pig’s sister restaurant the Ravenous Pig has their own craft brewery, and the Disney Springs venue offers quite a few of these beers plus a handful of other Florida craft beers. 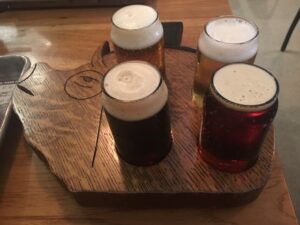 The beer flight comes on a cute board.

Tip: Polite Pig does not participate in the “regular” Disney Mobile Ordering, but you can do online ordering ahead of time via their website.

While this is a counter service restaurant, if the cast member happens to be attentive, you are free to leave a tip, but it is not obligatory.

All in all, the Polite Pig is a solid choice for a quick service meal in Disney Springs. It offers something for pretty much everyone, including vegetarians, but has limited vegan options. This place will definitely remain on our “favorites” list.

Ready to plan YOUR family’s trip to Disney World? Contact Patricia at All for Dreams Travel for your FREE quote. She will help as much or as little as you like in planning everything you need – flights, hotel, tickets, dining – to make your vacation magical.