A Review of Star Tours The Adventures Continue: An Out of This World Attraction at Walt Disney World’s Hollywood Studios 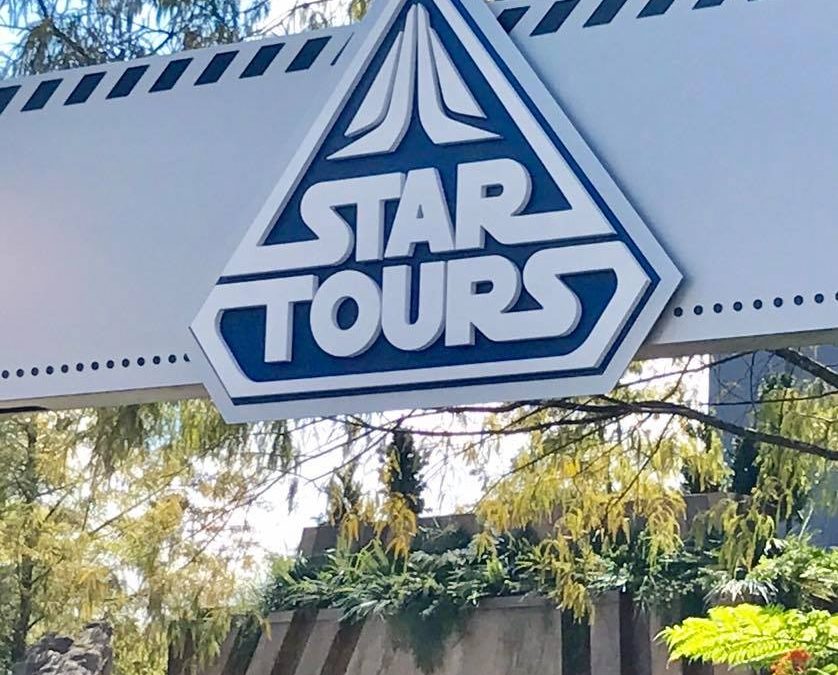 Since May 25, 1977 the Star Wars films have transported audiences into the Star Wars Universe. The original trilogy of Star Wars films became so popular that Disney began plans to bring a Star Wars themed attraction to their theme parks. George Lucas and Disney collaborated and opened Star Tours at Disneyland’s Tomorrowland in January of 1987. Star Tours was so popular at Disneyland that Disney created a version of the attraction for Disney’s Hollywood Studios (Which at the time was called Disney MGM Studios). As Star Wars kept gaining popularity, Disney decided to update Star Tours to be able to coincide with the release of new Star Wars films and TV shows. The updated and current version of the attraction is called Star Tours- The Adventures Continue. It opened in both Disneyland’s Tomorrowland and at Disney’s Hollywood Studios at Disney World in 2011. So now that we’ve covered the history of Star Tours let’s blast off to the galaxy far far away and see what adventures are in store at Disney’s Hollywood Studios. 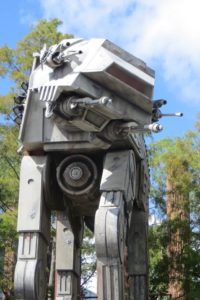 Star Tours the Adventures Continue is located at Disney’s Hollywood Studios in the Echo Lake section of the park. Other attractions in Echo Lake include Indiana Jones Stunt Spectacular, Jedi Training Academy, and For the First Time in Forever: A Frozen Sing-Along Celebration. Star Tours is a 3-D motion simulator attraction. Due to the nature of this type of attraction expectant mothers, anyone who has preexisting medical conditions, and those with motion sickness should skip this attraction. Guests must also be at least 40 inches tall to ride.

Orange Bird Devo Tip: If you would like to minimize you wait time for Star Tours I would recommend visiting this attraction in the morning or late evening. These are usually the quietest times at this attraction because most guests arrive at the park between the hours of 10am and 1pm. You can also make a Fastpass reservation for Star Tours. Hollywood Studios has a tiered Fastpass system so I would highly recommend checking out JollyFrogger Diva’s article, A First Timer’s Guide to Fastpass +.

Your Journey Before the Journey- One of the best parts of a Disney attraction is that the Imagineers add extra detail to the queue of the attraction. The best part of a Disney attraction is that the story begins from the moment you enter the queue to the moment you exit the attraction (which most of the time is through a gift shop). The Star tours queue is set up as a spaceport terminal and you the guest are placed in the role of a space tourist. There are a few things in the Star Tours queue that you should look out for next time you are there. 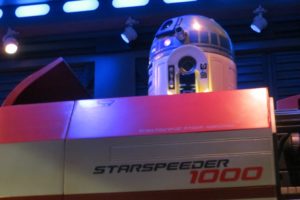 The Adventure Begins! – Once you reach the end of the queue you are ready to enter your Starspeeder 1000. The Starspeeder 1000 is the motion simulator vehicle that will transport you to many different places in the Star Wars universe. After you have taken your seat the Starspeeder takes off. However there is one problem, the captain isn’t on board yet. You are then greeted by C3PO and R2D2 who are now the leaders of this Star Tours adventure. The main story unfolds as your Starspeeder is carrying a Rebel spy that is wanted by the Galactic Empire. After being stopped by the Empire, your Starspeeder takes off trying to save the rebel spy. After you get away from the Empire, your adventure continues. However each time you ride Star Tours your adventure might change. Star Tours is set up to give you a different experience every time. There are many combinations of planets, characters, and stories that you can experience. For example you may run into characters such as Darth Vader and Yoda or you may visit planets such as Endor and Jakku. Every ride is a different experience and as the Star Wars universe develops, so does the attraction. 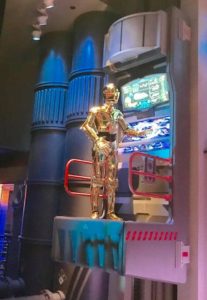 Orange Bird Devo Tip: Would you like to be the spy for the Rebellion? The good news is you have a chance! One guest on the attraction is selected randomly to be the rebel spy. To increase your chances to be the rebel spy try interacting with the cast members. Many cast members enjoy talking to guests and some are even big Star Wars fans.

Star Tours is a perfect attraction for Star Wars fans of all ages as well as those who are experiencing Star Wars for the first time. I hope you enjoy your continuing adventures on Star Tours and may the force be with you.

Would you like to experience your own Star Tours Adventure at Disney World? Thinking of planning a Disney World vacation? Be sure to use Patricia at All for Dreams Travel, the official travel agent of Tips from the Disney Divas and Devos.

A special thanks to Soarin’ Diva and Dopey Diva for providing the pictures for this article.