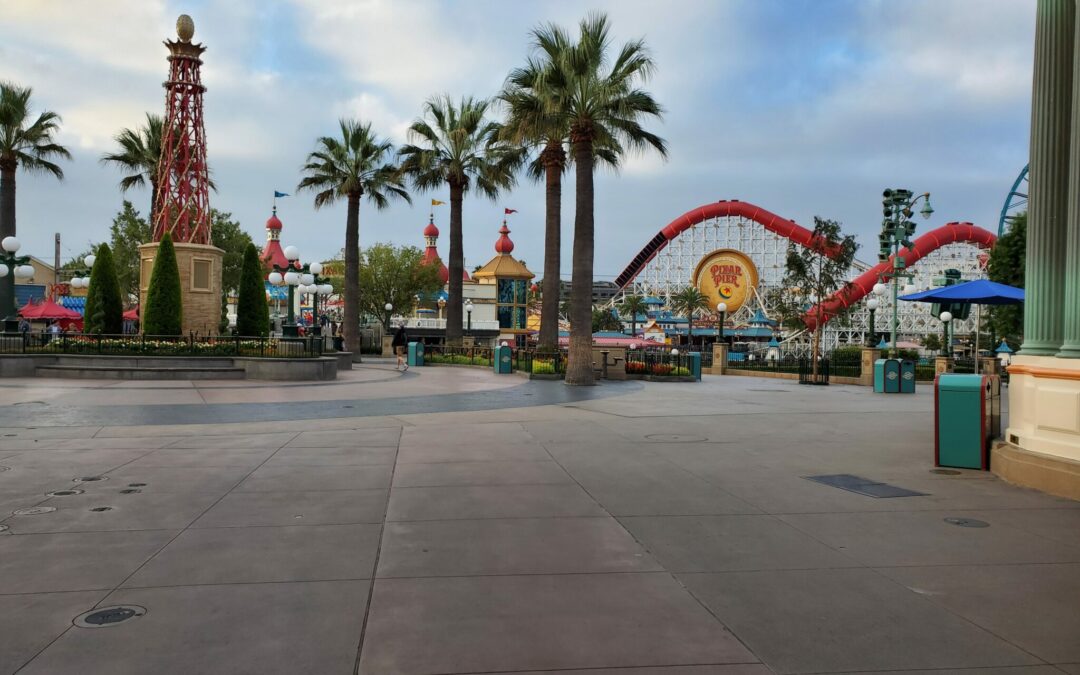 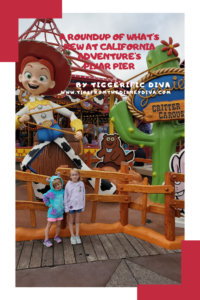 One of the things I love about Disneyland is there is always something new happening each time we visit the parks. From parades to fireworks to food to rides we find something different to experience. Over the past few years, both parks have reinvented themselves with new rides and attractions. For Disneyland the most recent change was the creation of Star Wars Land. Disney Magic Diva was at Star Wars Galaxy’s Edge on opening day and gives us all the details. In California Adventure, there are two major things occurring, the re-imagined Pixar Pier formerly known as Paradise Pier and the currently under construction Super Hero themed land.

Pixar Pier is finally complete with the addition of two new rides, food offerings and original rides given a Pixar themed update. Passholder Diva gives us a tour of Pixar Pier and all the changes that have occurred. This year the two new rides were unveiled to park goers – The Inside Out Emotional Whirlwind and Jessie’s Critter Carousel. 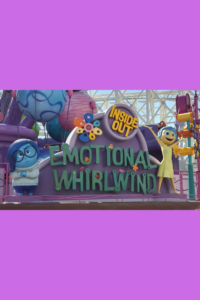 The Inside Out Emotional Whirlwind is based on the movie complete with everyone’s favorite emotions. Join Joy, Sadness, Disgust, Anger, and Fear in Headquarters where they are getting ready to move more of Riley’s memories. On this ride, you’ll hop into your own Memory Mover matching one of her emotions or another Character from the movie. My girls loved riding in the Rainbow Unicorn one. The ride will slowly ascend in the air and the Memory Movers fly in a circle around Headquarters while you sail past shelves of colorful memories. This ride will look familiar to anyone who rode Flik’s Flyers in the former Bugs Land area with respect to how the ride works. 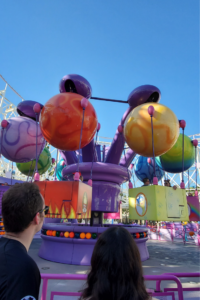 The Characters will be happy to provide you with guidance during the ride and Anger oversees the entire process from his location on top of the shelves. There are opportunities to take pictures with statues of the other Characters in front of the ride. Speaking of Characters, Joy and Sadness have joined their Pixar Pals at their very own Character Meet and Greet near the Pixar Pier Band Shell where the band performs throughout the day.

Diva Tip: If you’re looking to meet both characters, hang around for a few minutes after you’ve been through the queue. The Cast Member will start letting people in line know when one character is leaving and new one will be coming out. Get back in line once you hear they’re going to make the switch and you’ll be one of the first in line to meet the next character. 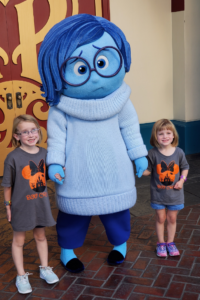 Down the boardwalk from the Emotional Whirlwind you will find Bing Bong’s Sweet stuff. The store was only partially open last year we went. This whimsical store is part clothing and toys; part candy shop. In addition to your normal Disney parks merchandise, you will find Pixar themed merchandise that is exclusive to California Adventure. There are a variety of items from Coco, Monsters Inc., Up and of course Inside Out. Parents are warned: All of the merchandise involving the Rainbow Unicorn is white. It may be something you want to purchase on your way out of the park to avoid any mishaps during meals or snacks. If you’re looking to tame your sweet tooth, look no farther than this shop. It has saltwater taffy, Inside Out character-themed flavored popcorn, cookies, rainbow cotton candy and many more. Their newest addition is slush type drinks with cute names tied to various Pixar movies. 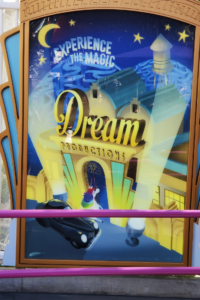 Diva Tip: For those with food allergies, ask the counter staff for the book listing the ingredients for each item. They’re happy to help!

During the original Paradise Pier days, there was a carousel ride based on The Little Mermaid movie. King Triton’s Carousel was closed down as part of the change to Pixar Pier. Jessie’s Critter Carousel has moseyed into its place with a fun new ride full of zany critters and songs. Join Jessie and her critter friends as you go on a Wild West adventure. Woody and the Old Prospector make appearances on the scenes surrounding the ride. Pick your favorite critter and hop on for a ride sure to please even the littlest buckaroo. There’s even a purple skunk who can’t quite seem to find his way and is going the wrong direction on the ride. 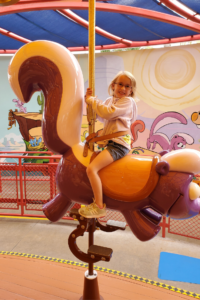 Diva Tip: This ride is located next to the Incredicoaster and is a great place to keep smaller riders amused while waiting for those going on their Incredible adventure. Wait time for the ride ranges between 5 and 15 minutes.

With Toy Story 4 hitting theaters earlier this year a new friend has joined Woody, Buzz, and Jessie at the Toy Story Meet and Greet. Bo Peep has taken a break from traveling with the carnival to join her friends and meet her biggest fans. Bo and Woody travel together which means you can meet both of them at once! Be sure to have your autograph book ready, they are ready to take pictures and make memories with you.

Diva Tip: Woody, Bo Peep and Jessie are all happy to sign autographs. Buzz Lightyear does not sign autographs at this time. A Cast Member told us it’s because Buzz doesn’t want Zurg to be able to track him to Disneyland.

For a limited time during the year, you can also join Miguel for a Musical Celebration of Coco. Songs from the movie Coco are performed by the dancers and storytellers from the Plaza de la Familia. The Characters and costumes are beautifully designed keeping with the theme of Dia de los Muertos. The event runs during the Halloween season each year.

Diva Tip: The show takes place in the middle of the Plaza which is also a main street through to Pixar Pier. It is a very popular show so snag a spot early. If you’re looking to get to Pixar Pier, you should take the other entrance across from The Little Mermaid – Ariel’s Undersea Adventure to avoid the crowds and congestion.

The new rides and characters have rounded out the Pixar family and added another element of fun to the boardwalk. Both rides are for riders of any height which is a much-needed addition to the Pier. The addition of new characters also offers another distraction for riders who may not meet ride height requirements. 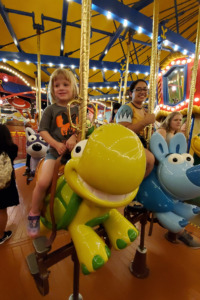 Do you have a favorite ride, snack or tip from Pixar Pier? Leave your tips in the comments. We’d love to hear from you!

If you would like information on planning your first or 50th trip to Disneyland be sure to contact Patricia at All For Dreams Travel for a free vacation quote.