A Tour of Pixar Pier at Disney California Adventure 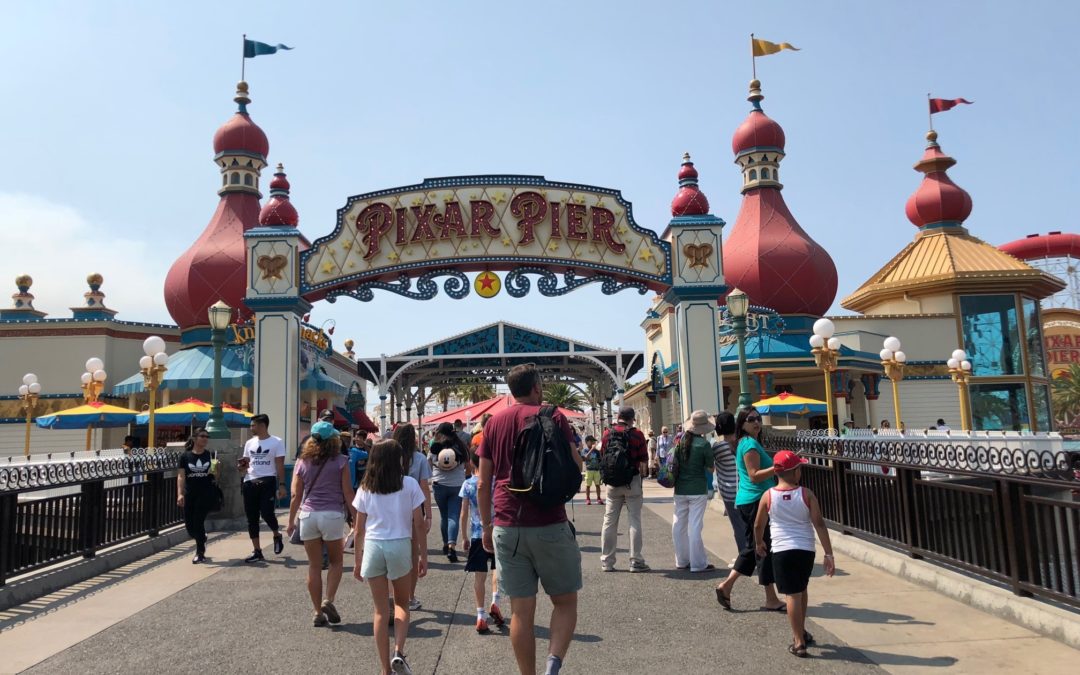 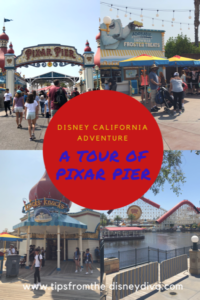 While I never had the opportunity to visit this land’s previous incarnation, I’ve read a lot about it and have looked at images. Paradise Pier was one of the more criticized areas of the park, a leftover from the earliest days at DCA, when corners were cut both budget-wise and design-wise. While the new Pixar Pier theming isn’t vastly different than the old look, more of an overlay than a massive rebuild, it seems to provide more of an overarching, cohesive look to the place. Plus, the Pixar characters are just plain *fun* to look at.

The area is supposed to be divided up into four distinct “neighborhoods,” but in reality, the whole land just screams “Pixar” to me.

Pixar Pier is located at the back of the park, and before you are even close to it, you are greeted by the sight of a massive roller coaster, the Incredicoaster, and a large Ferriss wheel, Pixar Pal-A-Round, at the far side of a small lake. 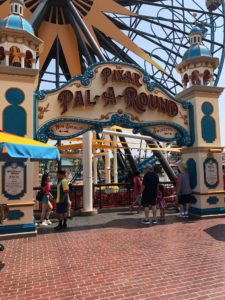 Pixar Pal Around is a large Ferris Wheel with a great view of the rest of the park.

The Incredicoaster has not changed substantively from its days as California Screamin’. There are now some figures from the Incredibles and a new back story, which is that Jack Jack has run away from his favorite baby sitter, Edna Mode. This attraction is a good use of a FASTPASS, but even on a crowded day, the stand by line seemed to hover around 50 minutes all afternoon. FASTPASSes were still available until late in the day on the two days that we were there, and that was with crowds in the 8 out of 10 range.

Tip: The shared FASTPASS distribution point for both the Incredicoaster and Toy Story Midway Mania is along the water, across from the attractions and near the information kiosk.

Toy Story Midway Mania is essentially the same as it was (I read that the main change was to the location of the queue). The line is mostly outside at this attraction, and it’s another attraction where you would be wise to get a FASTPASS if you are able.

One thing that was confusing was that the FASTPASS distribution kiosk (yes, Disneyland still uses paper FASTPASSes) for both the Incredicoaster and Toy Story Midway Mania are in the same spot, and it’s not directly next to either attraction. Instead, it’s across from the attractions along the waterfront. The FASTPASS kiosk is one of the few shady spots in the whole area. I know California is typically not as hot as Florida, and that the temperatures were unusually warm when we were there, but it is still a very sunny climate, and I can imagine that even during a “normal” summer it would be hot in this particular section. 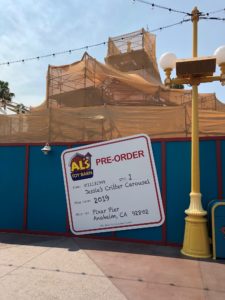 Jessie’s Critter Carousel is set to open in 2019

Jessie’s Critter Carousel, which will be a carousel ride featuring Toy Story characters, is currently being built between the Incredicoaster and Toy Story. It’s due to open in 2019.

Pixar Pal-A-Round, formerly Mickey’s Fun Wheel, is just past Toy Story Midway Mania and still features a giant image of Mickey’s head. It’s a large Ferriss Wheel where some of the cars swing while others are of the more traditional type. There are Pixar characters on the cars and ride instructions are provided by Dory from Finding Nemo.  I didn’t test out the swinging cars because I was afraid I might get queasy, but they typically have a longer line than the stationary ones. The view from the ride is great- you can look out over the Incredicoaster and indeed the whole park.

Tip: Be sure to download the Disneyland App so you can check wait times and FASTPASS availability.

Across from the Pixar Pal-Around is a midway area with Pixar-themed carnival games: La Luna Star Catcher, Heimlich’s Candy Corn Toss, Wall-E Space Race, and Bullseye Stallion Stampede. These all cost an extra fee to play.

The new Pixar Pier area ends just past Pixar Pal-A-Round at the Inside Out Emotional Whirlwind, currently under construction.  Disney bills this as a family friendly ride, set to debut in 2019.  Just past this construction zone, other areas that were formerly part of Paradise Pier are now called Paradise Gardens Park. 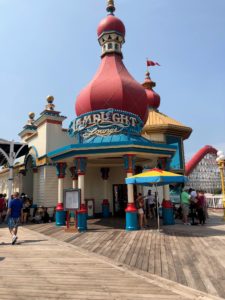 Lamplight Lounge, the only table service restaurant in Pixar Pier

You approach Pixar Pier over a bridge and through a walkway. To the right is the Lamplight Lounge, a nod to the famous Pixar lamp, Luxo, Jr. The former Ariel’s Grotto and Cove Bar have been combined into one new lounge. It’s the only table service restaurant in this entire area.

Just past the entryway to Pixar Pier is Adorable Snowman Frosted Treats. We really wanted to try this place – they have a lemony concoction that is supposed to be similar to the Dole Whip – but the lines were incredibly long every time we walked by (we visited during the hottest month on record in Southern California). Disney sorely needs to implement mobile order at this kiosk!

Tip: There’s very little shade or seating areas in Pixar Pier. If you grab a quick service meal or a snack, you might want to carry it over to the nearby Pacific Wharf, where there are many shady tables.

The Pier has some other Quick Service food kiosks, such as Poultry Palace, which serves chicken and is shaped like a giant take out box, Angry Dogs, serving both angry and slightly annoyed hot dogs, and Senor Buzz Churros. I had also heard about the delicious baked chocolate chip cookies from Jack-Jack Cookie Num Nums, but I couldn’t even see where the kiosk was located due to the massive crowds around the Incredicoaster.

If you do pick up a bite to eat in this area, just be aware that there is very little seating in the entire Pixar Pier area. I saw people huddled on the few benches that are under the FASTPASS kiosk and along some planters by the restrooms. 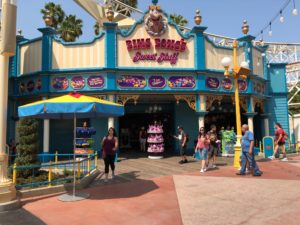 Bing Bong’s Sweet Stuff sells all kinds of treats as well as other merchandise.

There are two shops in Pixar Pier: Knick’s Knacks right at the entrance, across from the Lamplight Lounge, and Bing Bong’s Sweet Stuff. The former has all kinds of Pixar merchandise, including clothing, ears, toys, and mugs. There is a lot of Pixar art on display and for sale. There’s an Art on Demand kiosk and also an on-location character sketch artist.

Bing Bong’s Sweet Stuff had just opened a few days before our trip and it’s every kid’s fantasy (and every dentist’s nightmare!) – packed to the gills with all kinds of sweets, both packaged and fresh. There are cake pops, candy apples, cookies, and more. The shop was also doing a brisk business in Memory Refreshers (slushies). The layered Rainbow Unicorn was especially appealing.

Tip: If you are interested in the Imagineering that went into the creation of Pixar Pier, pay a visit to the Walt Disney Imagineering Blue Sky Cellar in nearby Pacific Wharf, where you can see sketches, paintings, and 3D models of the newly-reimagined land.

The whole Pixar Pier area, like its predecessor Paradise Pier, has a turn of the century, beachy boardwalk kind of vibe to it. In fact, Disney Imagineers traveled up and down the coast of California trying to capture a vintage amusement park by the sea look. I find it a close first cousin to the Boardwalk at the Walt Disney World resort, but I think that has a more refined, Victorian era seaside spa appearance while this area is more like an old-fashioned carnival.  Maybe its look is directed at younger folks, and judging by the crowds on the days we visited, it sure is popular with lots of them.  I will be very excited to see Pixar Pier when it’s completed and all the new attractions have been added.

If you need help planning your Disney theme park vacation, contact Patricia at All 4 Dreams Travel today for a FREE quote! 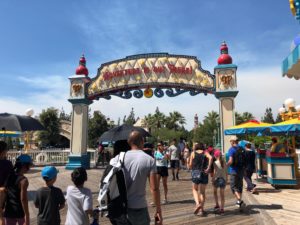 The sign as you exit lets you know that “Adventure is Out There!”