Across the Street from Disneyland: a Review of the Fairfield Inn Anaheim 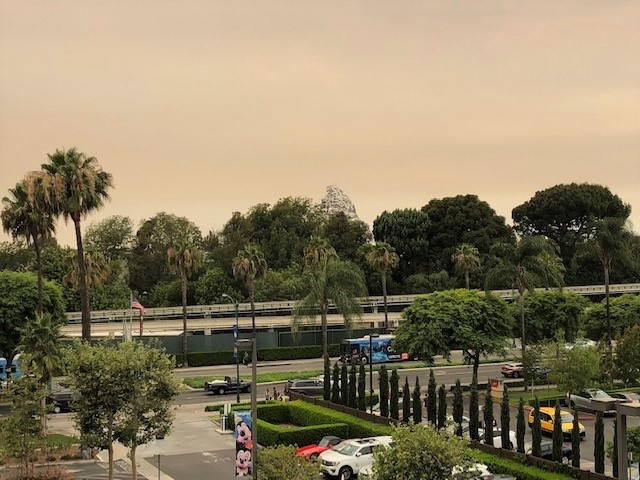 When we travel to Walt Disney World, I meticulously plan for months in advance. But when we recently visited Disneyland, it was literally a last-minute trip. We were visiting friends in the Los Angeles area, and tacked on a few days to see the theme park. 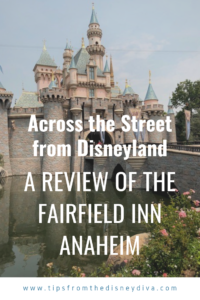 At first, I had planned on driving back and forth from my friend’s house each day. After the first day of fighting southern California traffic, however, I decided to book a hotel in Anaheim and stay there the next night. I hurriedly consulted Google maps and cross-referenced it with reviews of local hotels. Most of the hotels that I had read about previously, such as the Hojo Anaheim and the Desert Inn & Suites were either already booked up or were very expensive. I checked with Disneyland itself, but even with a military discount, the only rooms available were over $500. 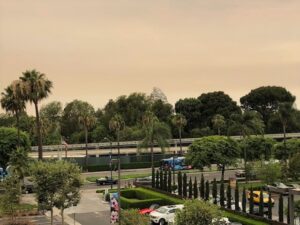 View of the Matterhorn from our room. The sky was overcast with ash from nearby forest fires.

I ended up booking a room at the Fairfield Inn Anaheim Resort. This is part of the Marriott chain, and is located literally across the street from Disneyland, at 1460 South Harbor Boulevard. I used points to book this stay, but if you are flexible in your dates, the rates can be as low as $126 per night in the off season or in the high $300-400 range in the summer. Joining Marriott’s free loyalty program, Bonvoy, gives you free wifi and mobile check in.

The hotel is very close to the I-5 freeway and is slightly set back from Harbor Boulevard just next to the Anaheim Camelot Inn. In fact, the Fairfield is tucked behind a McDonald’s and Panera and you can’t even see the front of the property from the road. The hotel itself is nothing to look at, an older property with exterior corridors and not much landscaping or Disney feel.

Self-parking and valet cost the same: $21 per night. We opted to valet park. Since we arrived very early in the morning, long before we could check in, we left our bags in the baggage room and headed out to the parks.

The simple, rectangular pool is at the front of the hotel just to the left of the entrance. It does have a hedge around it, but it’s also surrounded by concrete and asphalt. The lobby is updated but by no means luxurious.

The staff were completely pleasant, but again, this is not Disney-level customer service. 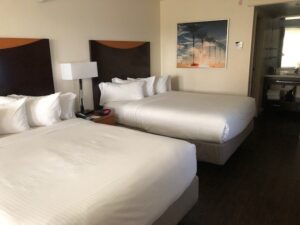 We stayed in a Queen room that also included a fridge and coffee maker. The room itself had been updated and featured a laminate floor (which I like much better than carpeting), but the bathroom was rather dated. My daughters liked that we could watch our own Netflix account on the large Smart TV. 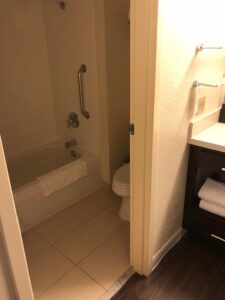 We were fortunate enough to be given an end room facing directly into Disneyland. I don’t know if the fireworks were visible from here as we ended up watching them from inside Disneyland.

The hotel also has some suites and some more Disney themed rooms, but I did not see inside any of them and the pictures frankly aren’t incredibly impressive.

The main thing that this hotel has going for it is the distance from the main gates. It’s around a half mile, which is about a seven-minute walk. For those who are used to the immersive nature of Walt Disney World, I will warn you that it is a bit disconcerting to see Cast Members in costume waiting for the bus on Harbor Boulevard. 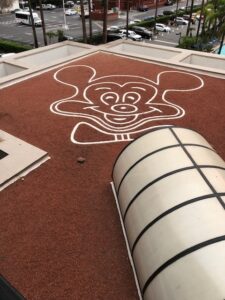 The one unexpected bit of exterior Disney theming: this somewhat scary Mickey head on the roof.

It was great, however, to be so close that we could come back to the room for an afternoon break – we somehow chose one of the rare times when California was experiencing a heat wave plus forest fires.

The other great thing about this hotel is that it has decent food options literally next door. While there is a food court in the hotel itself with a Pizza Hut, we never actually went to it because my daughters preferred to stop by Panera. Panera in room delivery is apparently an option as well.

There’s also a Mimi’s, an I-HOP, a Denny’s and Tony Roma’s all within a stone’s throw. 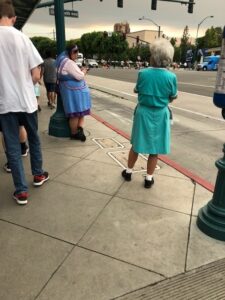 The bus stop on Harbor Boulevard across from Disneyland.

Given the same circumstances I would stay here again. But if my children were younger and if I had had more planning time, I would have preferred a more themed hotel with a better ambiance and a nicer pool. Still, you can’t beat having as short a walk to the front of Disneyland as the Contemporary guests have to the front of Walt Disney World for a fraction of the price.

Want help planning your trip to Disney? Patricia at All For Dreams Travel can give you a FREE quote and FREE planning help, whether you are visiting Disneyland or Walt Disney World.