An Interview With R.J. and Suzanne Ogren 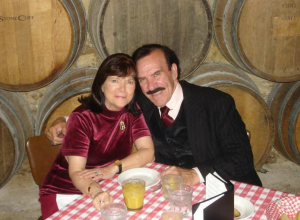 Who wouldn’t love to pick the minds of cast members and artists of Walt Disney World who were there in the 1970’s?  For Disney addicts like myself, it’s a dream come true!  I was extremely excited to have the opportunity to interview R.J. and Suzanne Ogren, both of whom were employed at Walt Disney World during that time.  I first introduced you to Suzanne and R.J. when I reviewed their book, Together in the Dream.  If you missed the review, you can read it here.  Suzanne actually played several characters at the Park, such as Mr. Smee, Bianca, White Rabbit, and each of the Seven Dwarfs.  R.J. was an original Management Artist at Walt Disney World, working on animatronics such as the pirates in Pirates of the Caribbean, Jungle Cruise, Haunted Mansion, Carousel of Progress, and so many more.  They graciously allowed me to ask them a few (if thirteen is considered a few) questions, and generally “fan-crush” on them.  Feel free to join me in fan-crushing and read the interview below. 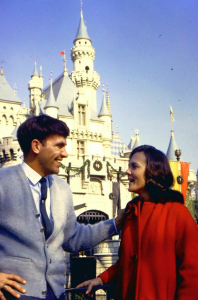 Q: For R.J. and Suzanne, can you tell us how you two met and began this romance that turned into a beautiful marriage?

A: “We met in tenth grade, while Suzanne was acting in a school play, and I was working backstage.  We dated, off and on, through high school, then got back together almost two years after graduating from high school, and were married in Sept. of 1965.”

Q: For R.J. and Suzanne, I understand you both met someone we would all love to have met, Walt Disney himself.  Can you tell us a little about that and how it influenced your desires to work for Disney?

A:  “We were in a group of people, on Christmas Day at Disneyland, who got to see and shake hands with Walt.  We’d both grown up loving everything Disney, and this was a dream come true to get to be in his company!  In the first chapter of our book, “Together in the Dream“, we tell about our decision that day to pursue our dreams of working for Walt.”

Q: When did the passion for Disney begin for each of you?

A:  “As children, we watched Disney movies, read Disney books, played Disney music, and watched the original Mickey Mouse Club.  R.J.’s ambition, from a very young age, was to be an artist for Disney, and he was drawing Disney characters by the time he was three years old.  Suzanne began dance lessons at 8 years of age, and practiced her passion for dance to Disney music.  When she first saw the Mickey Mouse Club, she decided that she wanted a career performing in Disney productions.  (Details of these stories appear in the upcoming sequel to “Together in the Dream“, to be titled “Remembering the Magic.”)”

Q: R.J., what was your favorite attraction or project to work on?

A: “To pick only one is difficult because I loved working on them all.  If forced to answer about only one, I would have to say “Peter Pan’s Flight” – because my family has always called me Peter Pan, saying I will never grow up!  Since black light painting is one of my favorite mediums as an artist, and the Peter Pan attraction is all black light, that made it my favorite as well.”

Q: Suzanne, who was your favorite character to portray?

A: “I’d always imagined portraying one of the Seven Dwarfs, and I got to do all of them at one time or another.  But, I portrayed Sleepy most often, and he became my second personality, so to speak!  He was loved by all the guests, and especially the children, and that was magical for me.”

Q: Do either of you have any behind the scenes tips or trivia you would be willing to share with our readers?

A: “For R.J.: Most people don’t know that the former attraction, “Twenty Thousand Leagues Under the Sea” was where we, as artists, did scuba diving (when the park was closed to guests) to check figures and even paint underwater!  For Suzanne: All of the character performers had to pass a dance audition and animate in character costumes before being chosen as a Walt Disney World character.”

Q:  What was the hardest part about working in the parks for both of you? 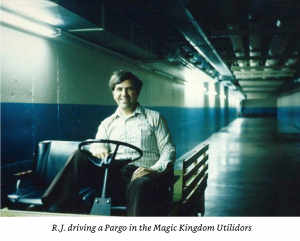 R.J. in the Utilidors 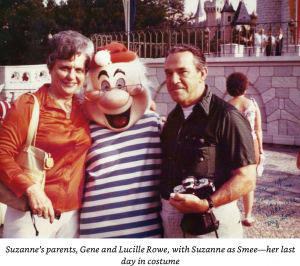 Suzanne as Mr. Smee posing with her parents

A:  “R.J. says it was having to get up so early in the morning, to get to the Park two hours before the guests were admitted.  He, and the other three artists, had to check the attractions to be certain every figure, set or prop was in perfect condition.  Quick emergency repairs could be made, or they would order maintenance to pull a figure and send it to their studio.  Suzanne dealt with Florida heat inside the character costumes, which could be overwhelming in a long parade.  One of the favorite ways for characters to cope with this was to pin ice water-soaked towels around their torsos, under their costumes.”

Q: What do you miss the most about working in the parks?

A: “Suzanne says she misses the smiling faces of all the guests, especially the young children.  R.J. says the sheer magical fun of working on all the figures and sets that gave so much pleasure to thousands of guests each day.” 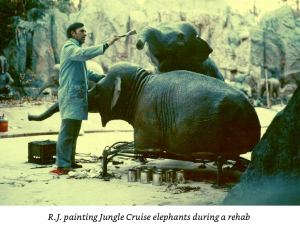 Q: R.J., do you have any tips for aspiring artists who want to work for Disney?

A: “When speaking to young people, during any of our public appearances, I always tell budding artists never to give up on your dream, and keep doing artwork and improving your talents.  And, if your dream is to work for Disney, keep knocking on their door – and always remember that, any job you have might create an avenue to the job you really want.”

Q: Suzanne, you did much more than portraying characters, you are an actress/dancer/writer as well.  do you have any tips for any performers who desire working for Disney?

A: “The Disney organization has grown to mammoth proportions since I performed at Walt Disney World.  They hold regional auditions all over the U.S., and you would need to contact them to find out what their criteria are, and where you could secure an audition.  In the meantime, stay true to your dancing studies and performance possibilities.  Just as R.J. said, never think a small job can’t lead to realizing your dream.” 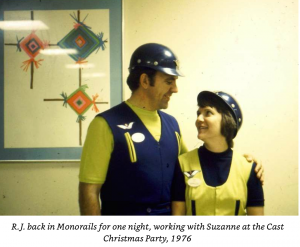 Q 11: Since you were so involved in the creative process and behind the scenes so much, does that make visiting the parks in any way less magical for you?

A:  “It’s always fun for us to visit Walt Disney World, which was our second home for several decades while we lived in Florida.  We even spent a week there last year, to celebrate our 50th wedding anniversary! Naturally, we always notice details that regular guests would not be aware of, but that never impacts the magic or the fun!  We will always be pixie-dusted, because we have so many positive memories of our time there.”

Q:  You have both written books separately, “The Design of Fear” by R.J., “Ribbons” written by Suzanne, and a book you have written together, “Together in the Dream.”  I understand you are both working on the sequel to “Together in the Dream” as well.  Can you tell us a little about what led you both into writing?

A:  “R.J. has been telling his stories about Disney forever.  Suzanne has been a published writer since 1995, doing travel articles and personality profiles.  both of us were continually asked why we didn’t write a book about our Disney experiences.  Bob McClain, the publisher at Theme Park Press, learned about the stories we both had to tell, and said he’d like to publish a book about them, especially since we were both a part of the early decades of Walt Disney World.  The success of that book has prompted Bob to ask us to write the sequel, and more.”

Q:  I’ll end on a slightly nostalgic note by asking what your (both of you) favorite memory about working at the parks are?

A: “We have so many.  R.J. especially remembers his work with Disney legends, such as Marc Davis (one of the Nine Old Men of Disney) and Leota Toombs (she was a Disney artist, and the ‘face’ of the ghost in the crystal ball in Haunted Mansion).  Suzanne had a special nostalgia for the many Christmases she got to be a part of the Candlelight Processional extravaganza that was performed in the Magic Kingdom’s Town Square.  She especially loved working with singer and composer Ralph Blaine (who wrote, among many other songs, “Have Yourself A Merry Little Christmas.)  Again, these memories are detailed in “Together in the Dream.”

What a joy it was to converse with R.J. and Suzanne, and discover all the stories they had to tell about their time with Walt Disney World in the 1970’s, practically the beginning of the park’s existence.  What an amazing time that must have been.  I hope you have enjoyed reading their responses to my questions, I had a very long list and had trouble narrowing my questions down to just thirteen.  If any of this has inspired you to visit Walt Disney World, feel free to contact our travel agent Patricia at All Dreams for Travel, and she can do all the work for you. Best of all, all of her services are FREE, all you have to do is click here to request a quote!

*****DISCLAIMER: All of the photo’s used in this article belong to R.J. and Suzanne Ogren.  They generously allowed me to use them for this interview.  We hope you have enjoyed this interview and want you to feel free to share this article if you did enjoy it, but we ask that if you share only the photo’s, please give photo credit to R.J. and Suzanne Ogren, thank you!!