Star Wars: Are the Rebels the good guys or the bad guys? Thoughts on the the Star Wars Takeover for non-Star Wars fans 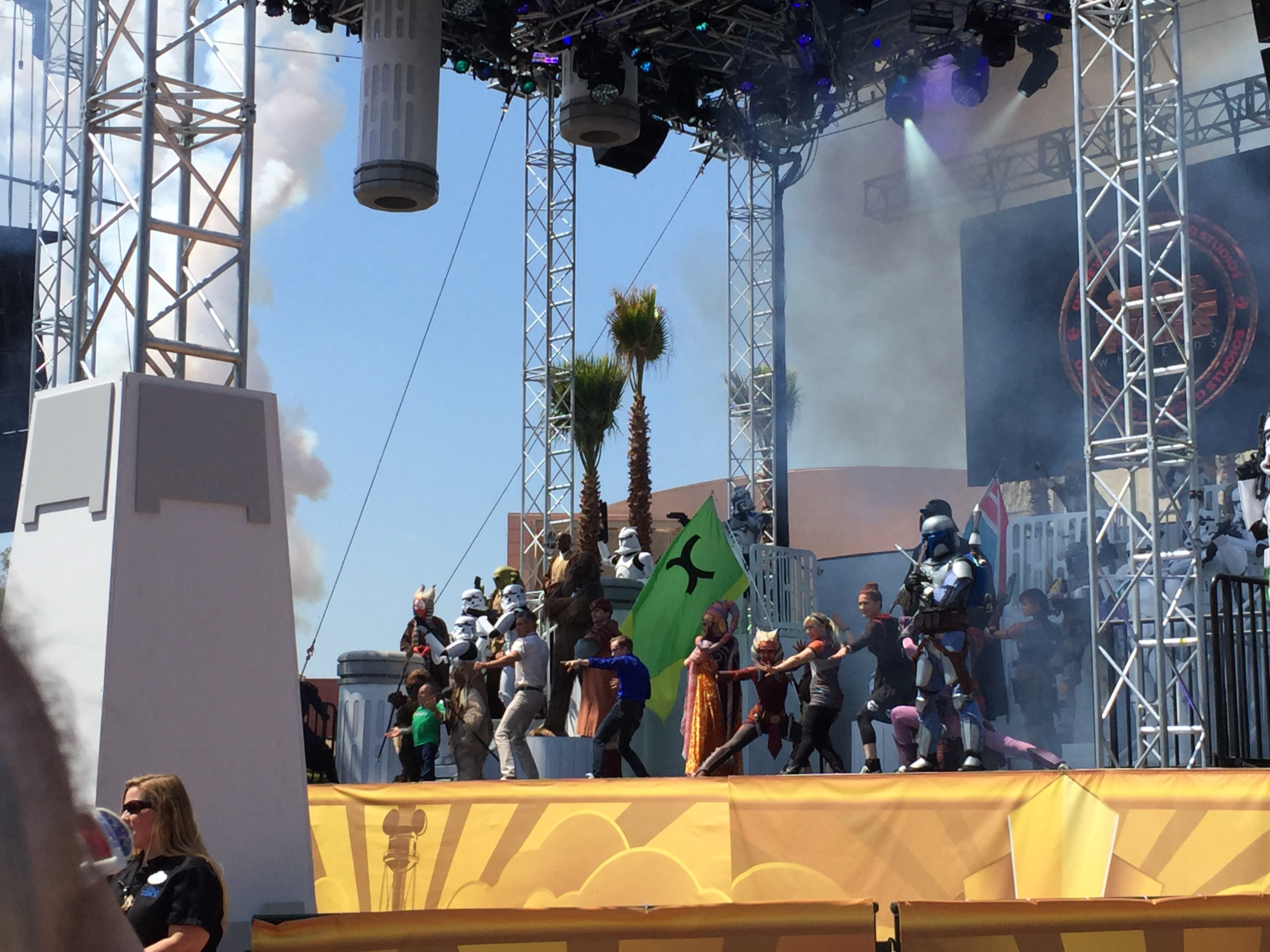 “Are the Rebels the good guys or the bad guys?”  Yes, I said this.  Outloud.  At Hollywood Studios.  During Star Wars Weekend.  While we were waiting to see the celebrity motorcade for the Star Wars actors.  Everyone in the vicinity looked at me like I was crazy.  Why would someone not into Star Wars even watch the celebrity motorcade?  Or be at Stars Wars Weekend?  Because I love Disney and my husband and I had the chance to go together without the kids.  That’s why. 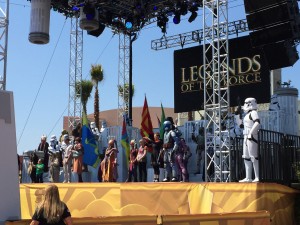 The motorcade Celebrities on stage

My husband and I were both born in the early 80’s and are familiar with the whole Star Wars Saga.  I was born on May 4th so I get the references.  He doesn’t really get into Star Wars (and didn’t really know the answer to my question) so I haven’t been forced to watch them against my will. I am vaguely aware of the show on Disney XD, but my kids are still stuck in the Disney Junior crowd.  Overall I have a basic idea of Star Wars, but no actual knowledge. 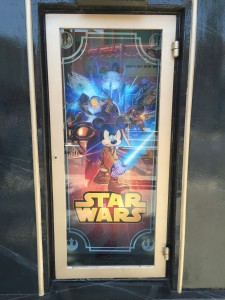 Now that Disney is expanding at Hollywood Studios and Disneyland to include permanent Star Wars areas you will get to experience your favorite saga every trip.  Late 2015 the first official Star Wars exhibits and attractions will start to open.  Merchandise will be available year round. 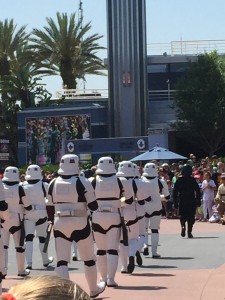 These Stormtroopers are part of a group that dresses up. They had lots of cool costumes.

Unfortunately, with plans to include Star Wars every day Disney has done away with its famous Star War Weekends.  Now you won’t need to book reservations for these special weekends only.  But there could be some negatives as well.  Star Wars Weekends always brought actors, special guests, and new merchandise.  Hollywood Studios would be decorated and themed for Star Wars.   Normally, adults are not allowed to wear costumes, but they could do so during these weekends.  Hopefully there still will be days when adults are free to wear their Star Wars costumes, but Disney has not said anything about that yet.

Not being Star Wars fans we had no idea what we were getting into when attending one of the Star Wars Weekends.  At first we couldn’t figure out why the parking lot was so busy.  School was still in session.  Then we saw all the people.  Star Wars fans you are awesome.  You really commit.  We saw the cutest little girl in an R2D2 dress and matching R2D2 Mickey Ears.  We saw a full-size Chewbacca.  We saw numerous t-shirts, hats, bags, and costumes. 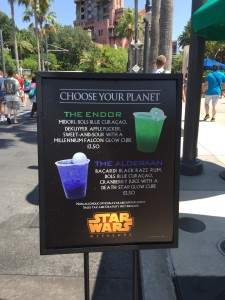 Drink menu! Even non-Star Wars fans can get behind a good drink!

After we made it through the gate we went our merrily way and did our own thing.  Since most of the guests were there for the Star Wars activities we were able to get on most of the rides with low wait times.  We happened to be in the stage area for the celebrity motorcade and decided to stop and watch.  I love anything to do with movies and thought it would be fun to see.  Plus, Mickey and his friends are dressed in Star Wars costumes.  It was fun and we did learn a few Star Wars facts.  (The Rebels are the GOOD guys!  Who knew?)  Some of the actors are voice actors and did a few of the non-Star Wars voices they do.  While I had no idea who most of the people were it was an impressive group all together on the stage.  The excitement from the crowd was exhilarating. 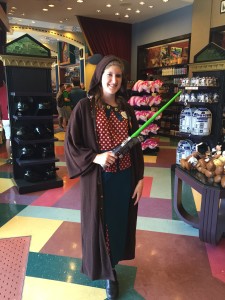 Cast Member at Villains in Vogue

I had no idea how much stuff went on during Star Wars Weekends!  Celebrity talks, Jedi training, a special Darth Maul (I thought this was particularly hilarious play on words) for all your Star Wars merchandise, special character meals and fireworks, along with autographs and entertainment.

We opted to have lunch at Disney’s Boardwalk since the restaurants were busy.  Hollywood and Vine was extremely busy.  I had friends do the Jedi Mickey’s Star Wars Dining and they said it was amazing!  The food was delicious (and themed!) and they had so much fun with the characters. 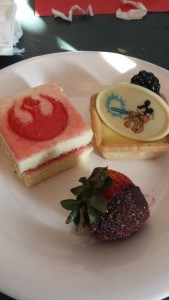 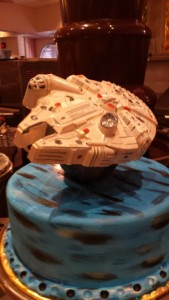 Disney puts a ton of work into these weekends.  Getting the celebrities booked, the entertainment coordinated and specially themed food and drinks.  They go all out for these weekends.  Like everything Disney decides to do they do it with gusto.  We can only speculate on what Disney will do in the future. 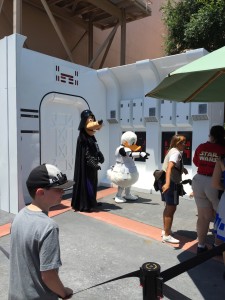 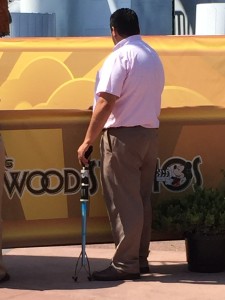 His trash picker-upper is a light saber!

If you are like me and not into Star Wars, don’t skip out on the new Star Wars land.  Embrace it the best you can.  Enjoy the fun.  We saw a couple with his/her shirts-his said “I love Star Wars” hers said “I love my Husband.”  Hopefully they realize how committed Star Wars fans are and will continue to put on special events.  Even non-Star Wars fans will be excited for the new changes. Everyone loves new attractions, characters, and experiences.  Enjoy the magic that the park has to offer.  You never know, you might enjoy visiting a galaxy far, far away. 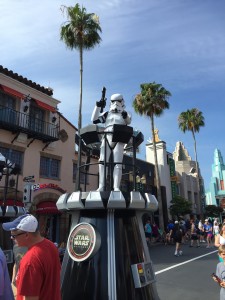 The Stormtroopers are watching your every move!