Are You Brave Enough For Sorcerers of the Magic Kingdom? 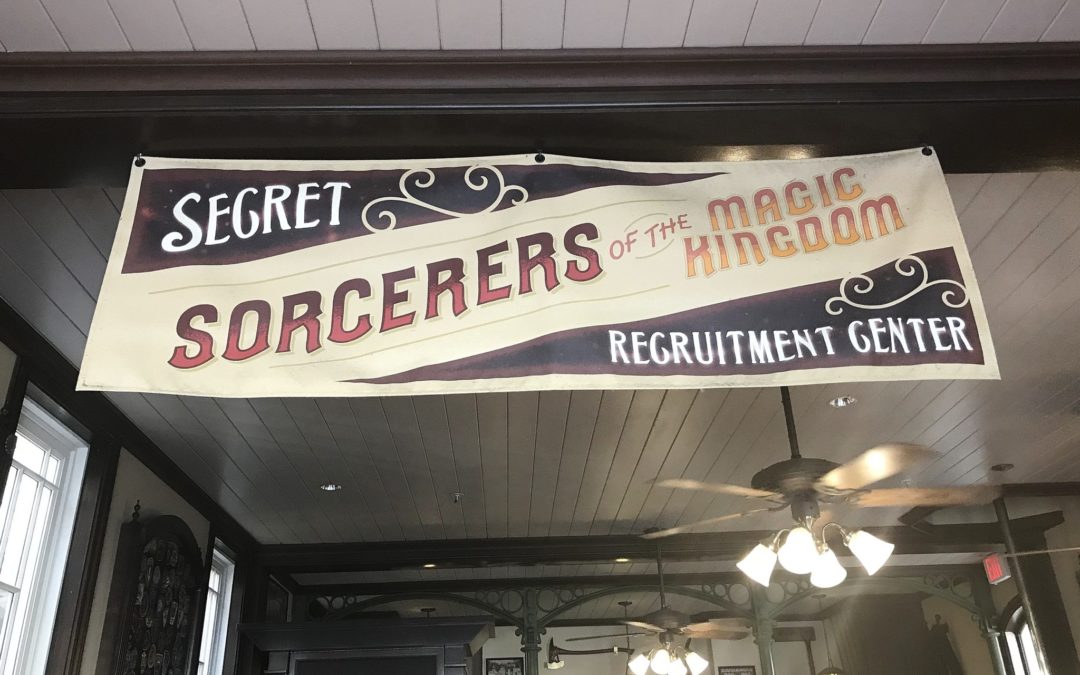 It doesn’t happen too often, but every once in a while my husband and I find ourselves with a little extra time when at Walt Disney World’s Magic Kingdom. We tend to stick to a planned schedule, and if we are actually running ahead of schedule, or just have a little time before our next FastPass + selection comes up, we find ourselves wandering aimlessly, wondering how to fill that time gap.  You know those gaps, the ones where there isn’t enough time to stand in a long line for another attraction before your next FastPass, or you just don’t want to stand in a long line, but you don’t want to just sit and wait either. 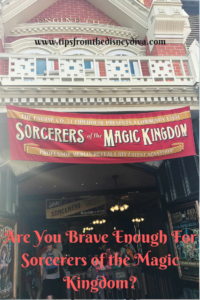 Are You Brave Enough For Sorcerers of the Magic Kingdom?

It was during one of those gaps a few years ago that we decided to give the game Sorcerers of the Magic Kingdom a shot.  I’ll admit, we were absolutely clueless on how to play or anything that was involved, but we thought we may as well give it a try. 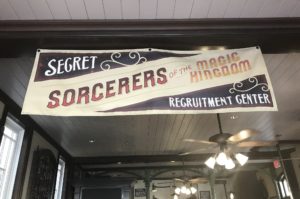 To get started, you and everyone in your group who wants to play needs to head to the Firehouse on Main Street U.S.A.  It’s here that you will see the large banner above the doors with the words Sorcerers of the Magic Kingdom boldly advertised.  This is the recruitment center for the quests you will embark on.  As you go in, you will probably find a short line of other guests there to pick up their Sorcerer spell cards.  Never fear, the line moves fairly quickly, especially if some of those guests are experienced in the game.  If you aren’t experienced, don’t worry, the amazing Cast Members will quickly train you in all you need to know. 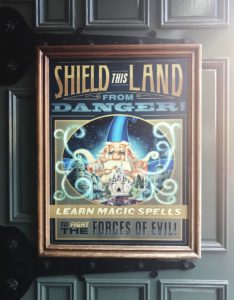 You will be asked who the main player will be, so you may want to choose before you get in line.  The reason for this is, each time you work on a quest the same magic band will need to be used to bring the magic portals to life.  You will be given a new pack of Sorcerer Spell Cards for each player and a Key card, as well as a copy of Merlin’s mystical map showing clues of where to find the magic portals.  There are a total of twenty magic portals in Walt Disney World’s Magic Kingdom, spread throughout Main Street U.S.A,  Fantasyland, Adventureland and Frontierland. 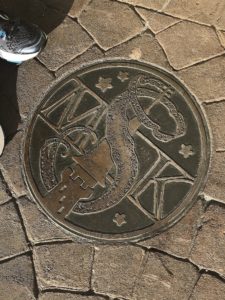 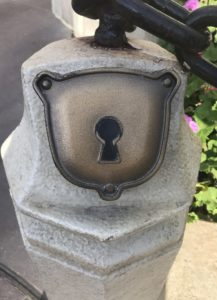 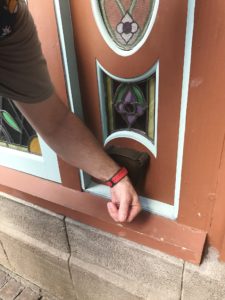 As you are sent on your first quest, let Merlin’s map guide you to the first magic portal you need to unlock.  To help a little in finding the portal, you need to look for a large medallion embedded in the ground with the initials SMK, for Sorcerers of the Magic Kingdom of course.  It will always be in front of a window of some type, these windows are secret magic portals.  Once you arrive at your first portal, look for a large key hole symbol, this is where the chosen player will tap their magic band to open the portal.  You must first use the key card given to you by standing on the medallion and holding the card in front of you for the screen to the portal to “see”. 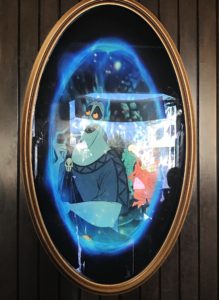 Fight the Evil Hades in Sorcerers of the Magic Kingdom 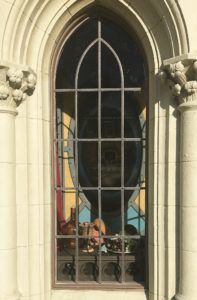 A screen will then come to life with the henchman of dastardly evil doer, Hades.  Hades, the Greek god of the Underworld, is attempting to take four missing shards that he will use to bond back together Merlin’s Crystal of the Magic Kingdom.  Hades wants to use this to make Magic Kingdom his new “summer home”.  To help him along in his evil and dastardly plan, Hades has assembled a band of fellow villains, Dr. Facilier, Maleficent, Scar, Yzma, Ratcliff, Ursula, Jafar and Cruella Deville.  It is up to the player to thwart the terrible plans of Hades and his gang! 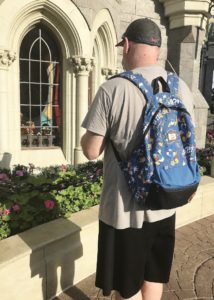 Watching video play for Sorcerers of the Magic Kingdom 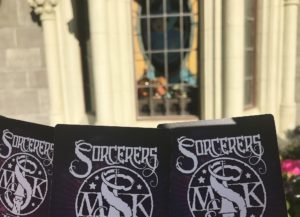 You need to try to listen closely, which can be a challenge in a park as busy as Magic Kingdom.  It helps if you have someone standing closer to the portal so they can hear the clues a little better.  To fight the enemies, you must choose one of the spell cards that was given to you before you started the game.  If you are like me, the first time you will be a little clueless.  We finally figured out that if you aren’t sure what the clue is trying to tell you, just grab as many cards as you can hold up, and hold them in front of you for the sensor to see.  One of the cards is bound to work by casting a spell on the villain and defeating them for that round.  After defeating the villain in that round, you will be given a clue on the next portal you need to visit.  You can choose whether you continue on the quest or not.  There will be a variety of different Disney characters to help guide you along the way.

There are a total of 9 quests in all, but don’t feel obligated to attempt to conquer all nine in one trip.  We were on our third trip playing Sorcerers before we actually completed an entire quest.  We found it was actually a pretty fun way to pass the time, and the best part is, it’s not just for kids.  We actually saw more adults playing on their own than kids.  That doesn’t mean children don’t enjoy it too, we have seen plenty of children having fun with it.  For us, we are still novices to the game, but I have seen some who come prepared with large binders sold in Disney Parks specifically made to hold the Sorcerers spell cards.  It was a little intimidating at first as we attempted to fumble around and hold our cards while they waited patiently to the side with their plethora of spell cards, ready to defeat Hades.

Disney Diva Tip 1:   You can get one new set of cards for each person in your group each day you visit Magic Kingdom.

Disney Diva TIp 2:  Sorcerer cards, Merlin’s map and the key card are all FREE!  This is a FREE game to play at Walt Disney World’s Magic Kingdom, how can you not like that?!

Disney Diva Tip 3:  There are special event cards for Mickey’s Not So Scary Halloween Party and Mickey’s Very Merry Christmas Party.  These are also free, just pick up one per person in your group after the party begins.  This is in addition to the free daily pack of cards you can get from the Firehouse. 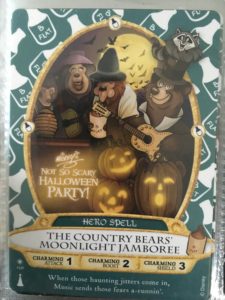 So there you have it, a quick tutorial on how to get started on your first quest with Sorcerers of the Magic Kingdom.  We found it to be a lot of fun, even when we had no clue what we were doing.  We also love to collect the Sorcerer spell cards, they make a great free souvenir.  If you ever find yourself with a little extra time at Magic Kingdom, I highly recommend that you give it a try!!