Today’s ask the Diva has two questions from Jen in Wisconsin. 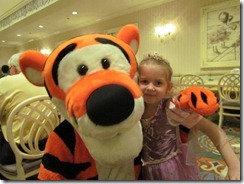 Q1: We have a WDW trip booked for June 8-14th (my first time back in 20 years!!). It will be my husband and I, our son (6 1/2) and daughter (4). We’re going to MK on our first full day and I have an ADR at Crystal Palace for 8:25 (earliest I could get). The park opens at 9am that day…I’m not sure how long the character breakfast will last. I’m assuming we won’t be finished until after 9:30. Will missing the first 30-40 minutes of park time make a big difference in wait times considering the time of year? I can still get a lunch reservation at CP, am I better off doing that?

You can pretty safely bet that most of your Character Meals will last approximately one hour. According to Touring Plans your actually not in as bad a shape during that week as I will be going for Spring Break next week. So I don’t believe it will make that much of a difference. Just make sure you plan more than one Magic Kingdom day and plan do get your Fantasyland rides done at rope-drop on those days. Normally I’d say avoid extra magic hours as they’re overly crowded at times, but they might actually work to your favor one day on your trip. As long as you have more than one morning at MK I don’t think it’s a major issue.

Q2: In a related question, we are staying at Pop Century and I read somewhere that the WDW buses start running only one hour before park opening. Is that true? If we don’t leave the resort until 8 am that won’t be enough time to get to the restaurant by 8:25. The following day we have an ADR at 8:00 at Tusker House so we definitely wouldn’t make our reservation using the buses that morning. Please tell me the info I have is wrong! I really don’t want to have to rent a car.
Thanks so much for your help and thanks again for your fabulous website!
Jen from Wisconsin

Ok Jen I actually called the Pop Century front desk for this one. You are correct, buses start running one hour before park opens (this is crazy to me. I don’t know how I have never heard of this before, but I haven’t!!) Then my friend Jodi at Magical Mouse Schoolhouse called her travel agent friend and got this answer:

a character meal and they will make it happen. Buses do not run

at 7AM. If nobody requests a bus, none will show up. They don’t

just run, so guests have to make sure to tell someone at the resort.

There is a bus that is specifically dispatched to take

by the concierge the night before and inform them if you

So You basically have four options and I’ll let you decide what you like best:

1) Tell the concierge when you arrive and ask about the dining reservations bus.

2) Rent a taxi in order to make sure you’re there in plenty of time. They recommend checking in 15 minutes a head of time, but it will be less of an issue if you’re the first reservation of the day.

3) Be standing at your bus stop at 8am ready to go and hope that the bus gets you in on time. (It probably would considering its so early). *this doesn’t solve your tusker house problem though!*

4) Move your reservation back some to give yourself a cushion. You might even consider moving it to around 10:30am which would allow you to knock out everything you want to ride in Fantasyland before things get crowded, then grab a fast-pass for Space Mountain or Splash Mountain before eating.

Thank you so much for asking this because I honestly had NOT run into this before. I even asked my friends who write for Chip & Co and Magical Blogorail and they didn’t have an answer right off the top of their heads either. So thanks! you’ve brought a major issue to light for me and I’ll be sure to think about it in my next article on breakfast in parks! Also, big thanks to Chip who reminded me that you can be 30 minutes late to an ADR before they cancel your reservation.

So big NEW tip here: YOU SHOULD NOT MAKE A PRE-PARK-OPENING DINING RESERVATION UNLESS YOU HAVE A PLAN!