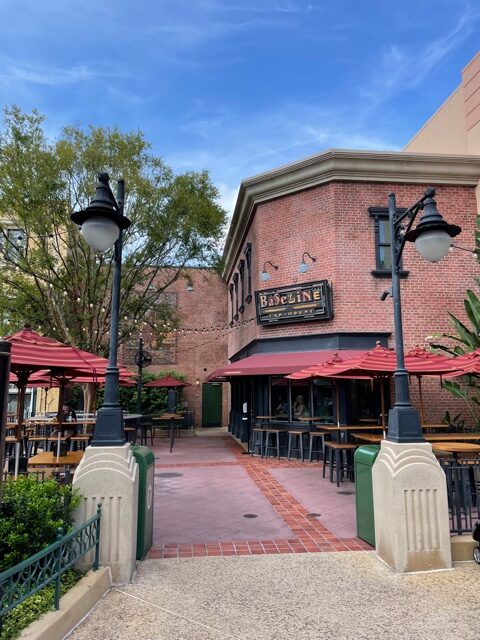 It was a hot day in Disney’s Hollywood Studios and we had some time to kill before getting on Rise of the Resistance, so we stopped off at BaseLine Taphouse located in the Grand Avenue area of the park. Housed in what used to be the Writer’s Stop, a popular coffeeshop with a bookstore theme that closed a few years ago, the taphouse is a lounge with a West Coast feel, and offers up California beers, ciders, and wines and a few cocktails and small bites. 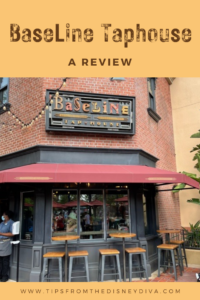 This area used to be part of the Streets of America section, which included nods to the architecture of both the East coast (New York City) and the West. Sadly, only small portions of this remain, and it’s mostly the East Coast side of things, including the area with Muppet Vision 3D, Pizza Rizzo, and Mama Melrose.

The story behind BaseLine Taphouse is that the lounge is built in an old industrial building from the Figueroa Printing Company of Burbank – a “mom-and-pop print house that once enjoyed a flourishing partnership with Disney Studios.”

The interior does evoke a very industrial feel, with brickwork and exposed pipes and ductwork. There are various tools and printing memorabilia hanging on the walls and in the shelves behind the bar as well as a few pieces of Disneyland memorabilia. 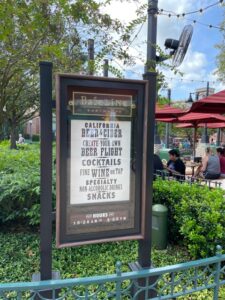 You place your order at the bar, not tableside. The place was empty on this day, so we were served our drinks immediately. On a past visit, the lounge was quite crowded with confusing multiple lines forming in front of each bartender. I have also read that sometimes you order at the bar and then they bring it out to you.

As the name implies, everything is on tap, and that includes beer, wine, hard cider, cocktails, and specialty sodas. The beers range in price from $9.25 up to $10.50, or you can create your own beer flight of four 5 ounce beers for $12.00. 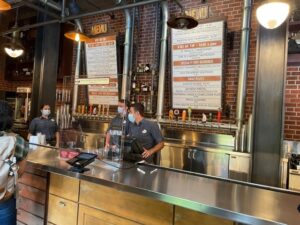 Order at the bar. The walls feature memorabilia from a former print house as well as a coffee shop that was once housed here.

Food offerings are fairly limited, consisting of just four small plates: Bavarian Pretzel with Beer-Cheese Fondue and Spicy Mustard ($9), Coffee-rubbed Rib-Eye Beef Puff ($11), California Cheese and Charcuterie Plate ($10), and Spiced Almonds ($6). We have honestly never tried any of these dishes, since we are usually just here to grab a beverage.

There is not much seating inside – just a counter top running beneath the windows with a few chairs. But there is plenty of seating under umbrellas in the partly-shady courtyard outside.

All in all this is a fine place to grab a cold beverage on a hot day in Hollywood Studios. It’s not overly themed, it doesn’t have a lot of bells and whistles, but it is one of the few lounges in this side of the park, and you don’t have to have made a reservation weeks in advance, like you do at Oga’s Cantina.

Patricia at All for Dreams travel helped me plan my Disney vacation. Her services are always FREE, and her knowledge and dedication are invaluable. She can help you with any of your Disney travel needs!