Be Our Guest- my new favorite spot at Magic Kingdom 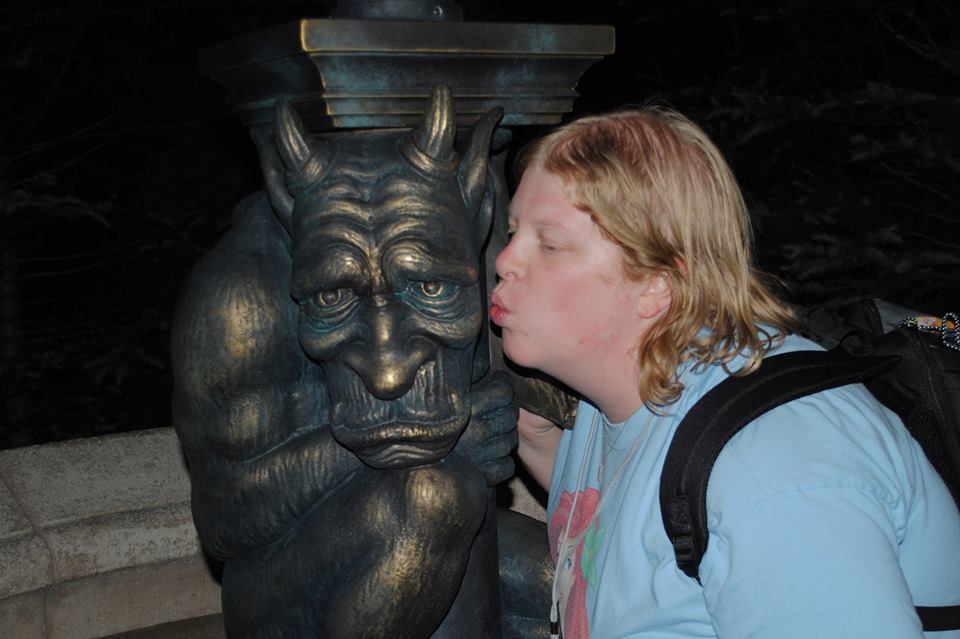 Beauty and the Beast has always been one of my favorite Disney animated movies. It made me sad that for so long, such a classic movie had such a small presence in the parks. Sure, there was a great live action show at Hollywood Studios, but that was about it. When I first heard about the plans for Be Our Guest to be built during the Fantasyland expansion, I was very excited. I was even more excited to get reservations for dinner there twice during our last trip. They definitely weren’t easy to come by- we had to be flexible and build our park schedule around the reservations we could get- but I just knew it would be worth it.

On our first night dining at Be Our Guest, we arrived early for our reservation and were seated fairly quickly. For our first dining experience here, we were seated in the dark and mysterious West Wing. 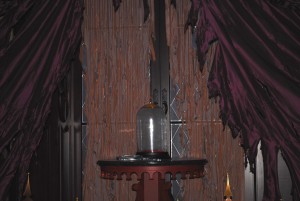 In true Disney fashion, no detail was spared, and they even had napkins folded into the shape of roses waiting on our plates when we were seated. 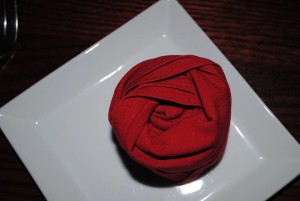 tie your napkin round your neck cherie 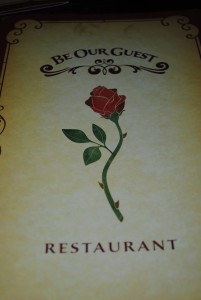 go on, unfold your menu

I had studied the menu online before our trip, and I knew I was getting their grilled strip steak with garlic-herb butter and pomme frittes before I ever stepped foot in the building. I also knew I was getting the french onion soup because that is one of my favorite soups on any menu. Most of the other members of my party followed suit, because we are a steak loving family, but my husband decided to try the herb-crusted lamb rack.
The soup arrived first and it was everything I had hoped for. French onion soup, can, in my experience, be extremely salty at times, but this was perfect- rich, flavorful, cheesy, and a perfect start to the meal. 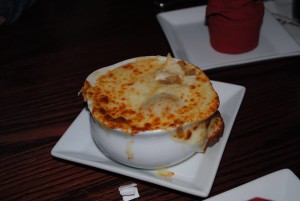 It wasn’t too long after our appetizers arrived before they were bringing out the main course. For it to have been as busy at it was both nights we visited, the service remained relatively quick and efficient. My steak was everything I had hoped it would be- flavorful, tender, and cooked to perfection, and the truffle oil mayo they served for dipping the pomme frittes was outstanding. My husband said the lamb was good too (I didn’t try it as I don’t eat lamb), but he agreed my steak was better. 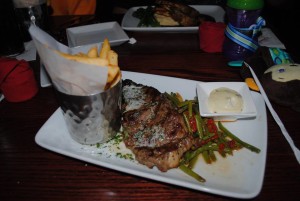 if your stressed, it’s fine dining we suggest 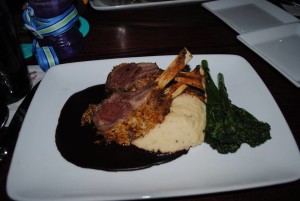 As we were on the dining plan, we saved a little bit of room for dessert. They had a beautiful cart of desserts that they brought around to our table so we could see our options before we ordered. I, of course, opted for the signature Grey Stuff. Other members in my party decided to order the Chocolate Creme Puff and Lemon Meringue Cupcake with the understanding that we would all share amongst ourselves. True to the song, the Grey Stuff IS delicious, as were the rest of the desserts we sampled. I have a real sweet tooth, so it would be hard for me to choose a favorite here. 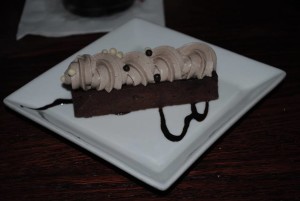 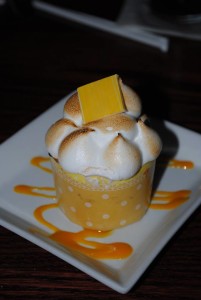 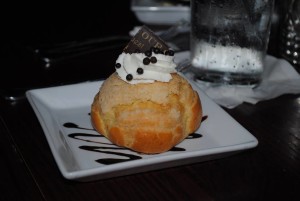 With our first experience going so well, we were definitely excited to dine here the second time. For our second meal, we were lucky enough to be seated in the Ballroom. Disney Imagineers did an amazing job of replicating this iconic room, complete with snow gently falling outside the windows. We were visiting during Christmas season, so the seasonal decorations added more elegance to an already stellar room. 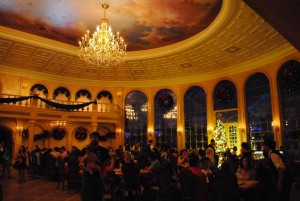 Normally, since we had already dined here once on the trip, I would have chosen to order something different from the menu so I could experience something new. However, my steak had been so delicious the last time that I decided to order it again (luckily, we weren’t dining there 2 consecutive nights). I didn’t miss my chance to sample another entree as my Mom opted to go with thyme-scented pork chop. I will admit the pork was tasty, but the steak remained champion of the menu in my eyes. 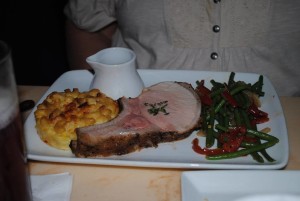 Our 2nd dinner reservation was a little earlier later than the first one had been and therefore it was a bit less crowded inside, so we were able to get some nice pictures of the restaurant once we were done eating, including one with our gracious host. 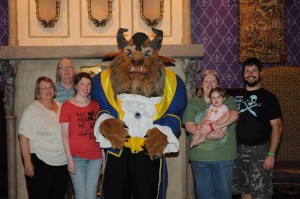 As we left the restaurant, we were pleased to see that we were just in time for the start of Wishes. In the past we have always watched from in front of Cinderella’s Castle, but since we were outside Castle Bastion we opted to stay and watch from there.  This choice was rewarded with a unique view of the show we would have never experienced otherwise. We ended up having fireworks shot from both sides of us, behind Be Our Guest as well as around Cinderella’s Castle. It was the perfect ending to the evening, and I can’t wait until our next trip when we dine here again. 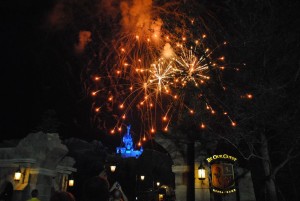