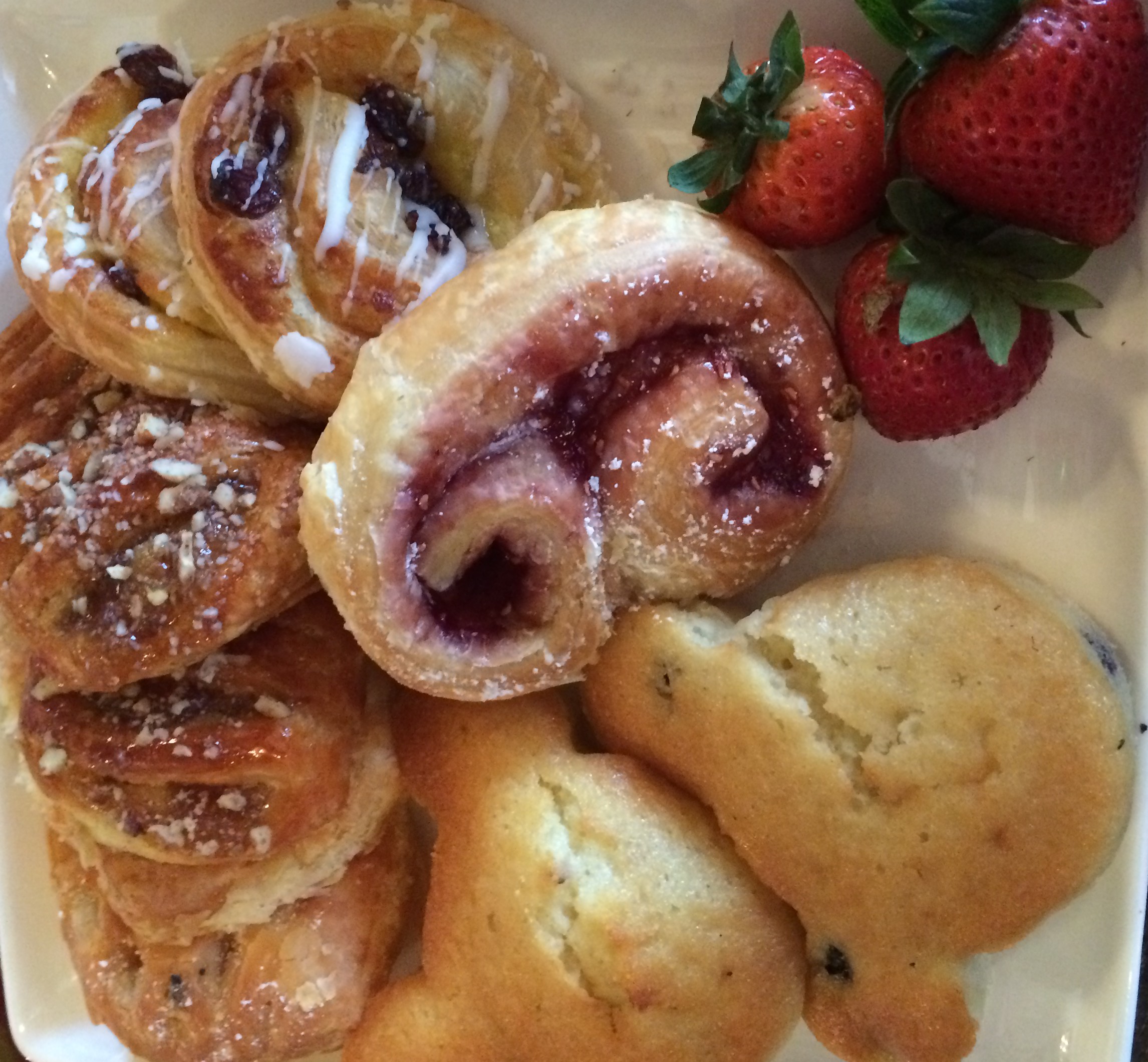 On our most recent trip to Walt Disney World, we managed to score two of the most coveted advance dining reservations: the 8am slot at Cinderella’s Royal Table, and an 8:05am at Be Our Guest. 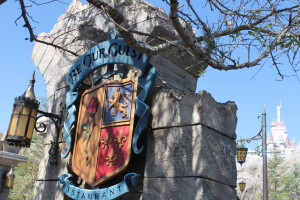 Diva Tip: The earlier you can make your in-park dining reservations, the better, especially on mornings when the parks open at 9am and do not have Extra Magic Hours. If you have a reservation at 8am, you can get into the park early and take some fantastic photographs with few other people in your shot!

Be Our Guest had just recently opened for breakfast, and while we had eaten dinner at Cinderella’s Royal Table, we had never breakfasted there before, so both of these dining experiences were new for us. Having done both, though, I can tell you that while each restaurant has its pros and cons, one experience was definitely better than the other. I’m going to break it down by category comparison, though, because your family might be looking for something different and/or have different needs than ours. 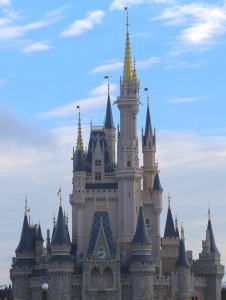 Location – This one is a tie.

If you can score an early breakfast reservation at either of these two restaurants, you can take a leisurely stroll down an uncrowded Main Street USA, snapping photos and listening to the Imagineering magic of the voice lessons floating down at you from the windows. Additionally, you are nicely positioned in Fantasyland to beat the rush of the incoming crowds headed to Seven Dwarfs Mine Train or Anna and Elsa. If either restaurant was to have an edge over the other, it might be Cinderella’s Royal Table, but only if you have a window seat. If you are lucky enough to be seated at a table near a window, you can look out on the park and watch it come to life, which is quite magical. 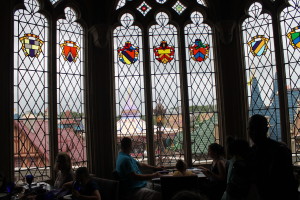 Diva Tip: If you want one of the highly coveted 8am ADRs at either of these two locations, it is imperative that you make your reservations at 180 days. The website opens one hour before the phones, at 6am Eastern Standard Time, so set your alarm extra early! As an extra bonus, if you’re staying on property, you can make dining reservations for 180 +10 days. If you really want an early breakfast slot, try making it for one of those “plus ten” days instead of the 180th day, and you’ll probably have a better shot!

Ambience – This one is a tie. 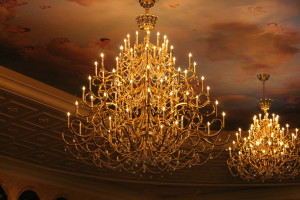 The chandelier at Be Our Guest

The Grand Ballroom of the Beast’s Castle comes directly out of the movie; it’s as if you’re there. Snow falls gently over the faraway mountains as you look out the towering windows, and you’re instantly transported to a little village in France. The cherubs on the ceiling smile down upon you as you dine, and the napkins folded to look like the Beast’s magic rose are so enchanting. As for Cinderella’s Royal Table, the magic begins as you ascend stairs that glimmer with fallen stardust, sparkling shimmers from the dresses of countless princesses who have passed this way before. The dining room at Cinderella’s Royal Table is opulent, to say the least. From the stained glass details on the windows to the comfortable, cushioned seats, this restaurant is definitely fit for a prince or princess. In short, both restaurants have their charms, and it’s hard for me to pick a favorite. 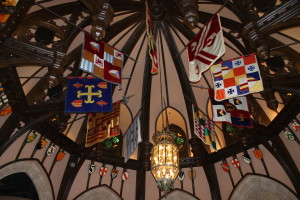 Diva Tip: When we dined at Be Our Guest for breakfast, we were not allowed to be seated in the West Wing. You could go in to take photographs of the prince’s changing portrait or the magic rose, but you could not actually dine there. If you would like to actually dine in the West Wing, my family has found that lunch is the best time to try to get a table there, but be warned: it is really quite dark, and young children might be frightened of some of the effects. 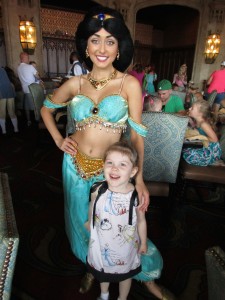 While the Beast does appear for photographs at Be Our Guest, he only does so during dinner. At Cinderella’s Royal Table, though, you are greeted with a special photo opportunity with Cinderella, and as the meal progresses, there is a parade of princesses who make their way around to your table for photographs and autographs. If you have a fan of princesses in your group, this is an opportunity not to be missed! The characters are subject to change, but at our breakfast we met Aurora, Snow White, Ariel, and Jasmine.

Diva Tip: A complimentary photo package used to be included with meals at Cinderella’s Royal Table, but as of our visit in August of 2015, that had been discontinued. Memory Maker/PhotoPass photographers are on site to take photographs with their cameras, or they’re happy to use yours, too.  Also, be sure to check out Mom Approved Costumes for super comfortable, non-itchy princess dresses for those photo ops!  There’s also a Prince Charming and a Beast costume for your little prince! 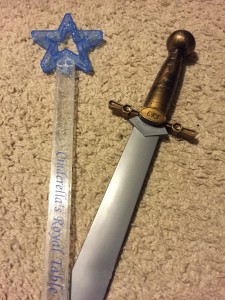 Be Our Guest does not offer any guest perks with the purchase price of breakfast; however, at Cinderella’s Royal Table, young princes are given swords, and young princesses are given magic wands. Princes and princesses are also given magic wishing stars for the special wishing ceremony. These are fantastic take-aways, and make great additions to your at-home dress-up boxes.

Diva tip: If you ask nicely, or if you’re at Cinderella’s celebrating, grown-up princes and princesses can also receive swords, wands, and stars. We dined with a party of 9 on our recent trip, and my sister and I wanted wands, too. We asked our server nicely, much to our husbands’ chagrin, and we were given extra so that we could play along with our four little princes and princesses.

Price – Be Our Guest 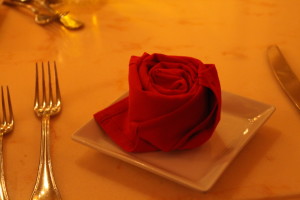 Table setting at Be Our Guest

Diva Tip: If you (or your little prince or princess) have your heart set on dining in Cinderella’s Castle, while breakfast is a little pricey, it’s less expensive than the other meals. You still get the experience of dining at the castle with princess royalty, but for a little less treasure out of your royal coffers!

Honestly, no one in my family was really that impressed with the food offered at Be Our Guest for breakfast. Ask me about their seafood entrée at dinner, and you’ll get a completely different story (Oh. My. Goodness. It’s to die for!), but all five of the adults in our party were rather nonplussed by breakfast. Your meal begins with a selection of breakfast pastries that are pre-selected and delivered to your table.  You are then given the option to choose your main course from the following options: assorted cured meats and cheese, open-face bacon and egg sandwich, eggs Florentine, scrambled egg whites, vegetable quiche (this is the same quiche from the lunch menu), and croissant doughnut. My family tried several of these, and my brother-in-law enjoyed the open-face bacon and egg sandwich, although it was a little bready. My husband and I tried the croissant doughnut and were bitterly disappointed. The banana caramel sauce, which sounded so delicious, actually ruined it for us, and I couldn’t even bring myself to finish my meal.

As for the food at Cinderella’s Royal Table, it seemed to be of a much higher class than that offered at Be Our Guest. Here, you also begin with a plate of standard breakfast pastries.  Please note: there is only one raspberry pastry in the selection, so grab it quickly before anyone else has the chance! You can ask for more pastries, but (aside from the raspberry) these are the same breakfast pastries you will find at other breakfast locations throughout the parks. Next, you choose from the following entrees: traditional breakfast of scrambled eggs, sausage, bacon and potatoes; healthy breakfast of egg whites, ten-grain cereal, yogurt, granola, and fruit; poached lobster and shrimp with cheese grits; caramel apple stuffed French toast; beef tenderloin and egg with potato and cheese frittata; or baked quiche with goat cheese, spinach, and mushroom. If the croissant doughnut at Be Our Guest was a let down, the caramel apple stuffed French toast at Cinderella’s Royal Table melted in my mouth – it was so delicious; I could have had seconds! All in all, the food here seemed so much better than the food at Be Our Guest, which is, incidentally, a favorite of ours for both lunch and dinner. 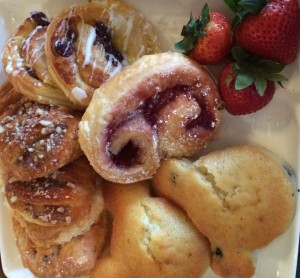 Diva Tip: Both of these restaurants also have kids’ menus, but when I questioned my own children and my nieces as to which restaurant’s menu they preferred, they said it didn’t matter because both places had cinnamon rolls! Also, I’m a vegetarian, and while I didn’t have to ask for it at Be Our Guest, Cinderella’s Royal Table did allow me to substitute the meat that would have normally come with my meal for a fruit cup instead. 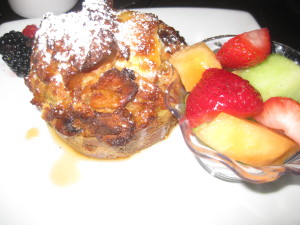 Stuffed French toast with fruit cup (instead of bacon!) 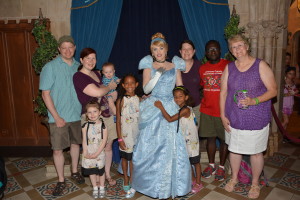 The Fancy Free Family with our hostess, Cinderella

Based on this information and my family’s experiences dining for breakfast at both castles, Cinderella’s Royal Table is the clear winner for breakfast. The food was better, and you get the added experience of character interaction with the princesses. I still love Be Our Guest, but I recommend trying to get a lunch or dinner reservation there instead; our breakfast experience just didn’t measure up to the quality of food and service we’ve gotten there at our other meals. Hopefully this ranking system will help you if you ever have to decide which castle to dine at for breakfast. Bon appetit!