Become a Pirate at PIRATES LEAGUE! 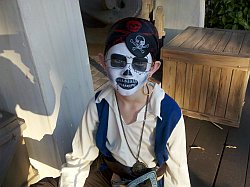 My newest Favorite Thing is an event my son attended during our trip last October to Disney World: the Pirates League! Everybody knows that the Bibbidi Bobbidi Boutique is a MASSIVE hit with girls, but I bet you are wondering if its equivalent for boys – the Pirates League – is equally good.

I scheduled my son, who is 8 years old, for The Pirates League at the same time that his sister, who is 4, was getting her ‘pretty’ on at the Boutique. We were going to the Halloween Party (which I highly recommend) that evening.

By the way, we brought our Princess Aurora dress (from Target) and our Cap’n Jack Sparrow costume (from eBay) with us to save a TON of money since in-park costumes are insanely expensive.

At the ‘hub’ in the Magic Kingdom we went our separate ways. The boys (grandpa, husband, and son) went to become Pirates in Adventureland, while the girls (grandma, daughter, and myself) headed into Cinderella Castle to become Princesses. The Pirates League is right next to the Pirates of the Caribbean ride and the Bibbidi Bobbidi Boutique is on the left side of the castle ‘tunnel’ just before you enter Fantasyland.

We decided to meet near the Pirate tutorials area in Adventureland when we were done.

As my group turned the corner into Adventureland, I saw my son looking exactly like a miniature pirate – well, except for the blue Crocs. 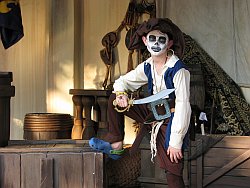 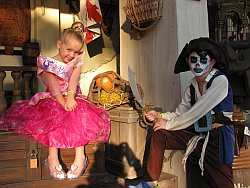 He, his father, and grandfather said they had had the best time EVER! They said that the make-up artist was beyond amazing and that my son had had an absolute blast.

For $29.95 + tax, ANYBODY (male/female/adult/kid) can become a Pirate complete with an official Pirate name entered into the official log (proven with a certificate you take with you).

My son was named ‘Josiah Sharkstench’. After your new pirate is ready, he’s taken into the official Pirate Secret Room for an initiation during which his photograph is taken (the photograph isn’t free but of course you can purchase it and likely you will purchase it because your kid will look as AMAZING as mine did). 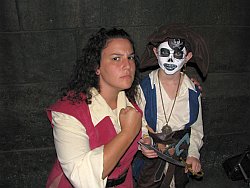 My son spent the rest of the day glaring at the many, many, many people pointing at him and commenting upon his amazing outfit and make-up. When I asked him why he glared and didn’t smile he clearly stated “because I’m a pirate, and pirates don’t smile”.

If the Bibbibi Bobbidi Boutique makes your girl feel like a real Princess, then the Pirates League will make your guy feel like a real Pirate! I highly recommend it as a present for your upcoming Disney vacationer!

Make a reservation then design a gift certificate to wrap up and give to your child (or favorite adult wanna-be pirate) this Christmas! 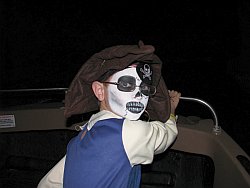 It was pretty hard to get the make-up off my son’s face, especially around his eyes. He looked like a goth-rocker for about two days after we washed his face. Eye make-up remover – don’t leave home without it!

Make reservations by calling (407) WDW-CREW (939-2739). You need theme park admission. The Pirates League is open 7 days a week from 9:00 AM to 4:00 PM. The latest reservation is 3:30 PM. Guests must be at least 3 years of age. Reservations are strongly recommended and can be made up to 180 days prior to arrival. A valid credit card number is required at time of booking. A $10 cancellation fee will be charged to the credit card for all no-shows or if a reservation is cancelled within 24 hours of the experience. Children must be accompanied by an adult at least 18 years of age or older during the entire experience.