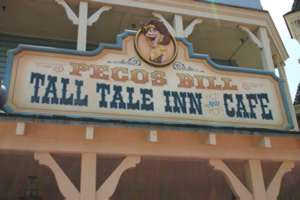 On our last trip to WDW we went into Pecos Bill which is BY FAR one of our favorite restaurants at Magic Kingdom.

We were going to go to the newly opened Taco place “Tortuga” across from Pirates of the Caribbean, but we were on day 3 which is the day most prone to a prime time kid melt-down, so as soon as my kids said “nooootttt tacoooossss” we decided to just sit in the back space right between Pecos Bill and Tortuga. It was almost completely dark and cool and quiet. We were the only people in there.

So I stomped through the back way to Pecos Bill only to pass a woman standing behind a huge sign in her Pecos Bill Wild West Attire (ps they gotttaaa be sweating like crazy women in that outfit!) and hear her telling people, “sorry, you cant come back here unless you have food in your hand. No more saving tables. You must be with the person that has the food”.

As I sail pass her, giving a sorrowful look at the mom with the jogging stroller who looks as if she might explode at any moment if not allowed to sit down with her brood, I turn around to read the sign which says something to the effect of

“Don’t even think about coming back through here and sitting at one of our tables unless you’ve got some Pecos Bill food with you or else we will lasso you and hang you from the ceiling by your spurs”.

well, not EXACTLY like that, but something to that effect. It might have been signed “love, Mickey Mouse” but that’s the only poetic license I took there.

Apparently one too many people experiencing an extreme downturn in the economy are getting savvy to the Divas info about bringing your own lunch into Magic Kingdom and are choosing to sit in the one spot in WDW which is cool even in the most blazing heat, Pecos Bill’s dining area.

So I ordered my food, using a person not the nifty little computer things that were there from the time before which I much preferred. Got my food and smiled rather meanly to the woman standing behind the giant “Don’t come back here or you’re as good as dead” sign for ruining my Disney buzz with her stupid rules and went back to the absolute quietest, coolest nook in all of Disney World.

The common room between Tortuga and Pecos Bill is heaven friends, but let me suggest you come via the Adventureland side instead of the Frontierland side. Those “pardners” ain’t messin’ around….

Have food with you or risk being dragged behind the nearest horse. I hear Bulls-eye is right outside with Jessie and Woody for a reason.