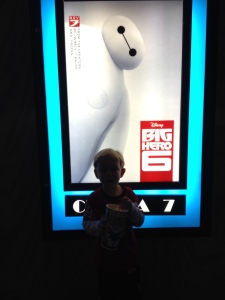 Hi everyone….Dopey Diva here!  So Lil’ Man Devo and I have just returned  from seeing the latest movie from Disney,  Big Hero 6!  I have to say this is definitely one of THE  best Disney movies I have ever seen. I am normally into the princess movies such as Tangled and Frozen and  I know I have heard and read many people compare Big Hero 6 to Frozen. But I feel this movie is just as good as Frozen- just in a different way. I know not everyone has been to see this movie and I certainly don’t want to spoil it for anyone, so I will keep the details vague enough so as  not to  give anything away.

Big Hero 6 is based on a young boy named Hiro Harmada who is basically a genius  and is trying to find his direction in life. Hiro has created a robot he uses in back alley robot fights, but his brother is trying to convince him to use his intelligence in a better way by joining the robotics class at his university.  After a terrible tragedy, Hiro  becomes best friends with Baymax, an invention of his older  brother. Together Hiro, Baymax and some other friends form a superhero team in order to combat a masked villain who has stolen one of Hiro’s inventions. This movie is action packed, which is great for the boys…no princesses or singing. Although that doesn’t mean it isn’t a great movie for girls too! In fact this  movie is perfect for kids and adults of all ages. (I even saw some adults with no children at the theater). There were a couple of dark, more intense scenes where my son, who is 4, said it was a little scary. I would suggest parent discretion for the younger ones since the movie is rated PG. Personally. I was fine with taking my son to see it.

We all know how almost every Disney movie has at least one emotional scene and, in keeping with that theme,  Big Hero 6 falls right in that category. For those of us that may be a little tenderhearted, I recommend bringing tissues, even Lil’ Man Devo cried (which is not something I was expecting from this film so it’s better to go in prepared).  This was an amazing Disney film that I would recommend to anyone who asks and I may even have to go see it again! I am now looking forward to a meet and greet at Hollywood Studios with Hiro and Baymax! At Disneyland, there is a Baymax and Hiro Meet and Greet over at the Starcade in Tomorrowland.

TIP: Make sure you stay until after the credits…..for those that don’t know Big Hero 6 is the  first Disney animated feature film to feature Marvel Comics characters, and, like most Marvel films, there is special scene at the end of all the credits.

Be sure to also check out our interview with an animator who worked on Big Hero 6- Daniel L Gonzales!