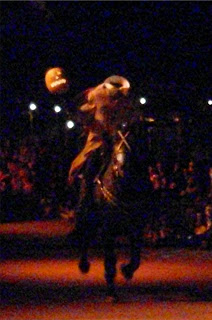 In my opinion, the Boo to You Parade at Mickey’s Not So Scary Halloween Party is the best parade at Disney World. It’s a great opportunity to see many rare Disney characters as well as several classic characters in Halloween costumes. My niece’s favorite part of the parade is the Headless Horseman who rides through before the parade starts. We’ve enjoyed watching the old Disney Legend of Sleepy Hollow, as narrated by Bing Crosby, for years. As a result, we always look forward to seeing the Headless Horseman, although my niece was terribly disappointed to discover that he doesn’t give autographs! 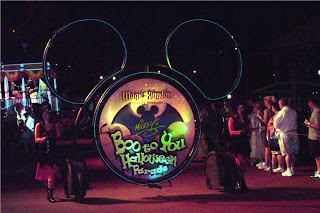 After the Horseman, the music begins and the floats make their way through Frontierland toward Main Street. The music is ridiculously catchy! You’ll find yourself humming it for days after watching the parade. The parade begins with many walking characters who carry fancy Halloween masks. The characters dance to the music, but also wave to the children in the audience and high-five them as well. 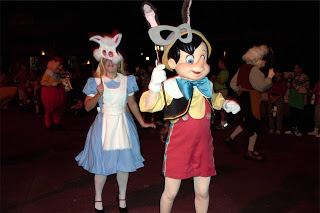 The first float has Mickey, Minnie, Donald, and Daisy in their Halloween finery, riding in a decorated gazebo. 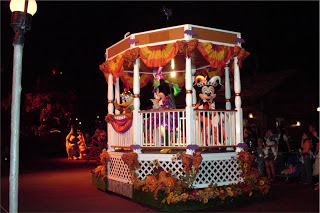 Next is a large tree from the Hundred Acre Woods with Winnie the Pooh and friends in their Halloween costumes. Peter Pan and the Lost Boys dance and play their way through the parade with Wendy. They are followed by Captain Hook and Mr Smee on the Jolly Roger and an enormous Tick-Tock Croc. 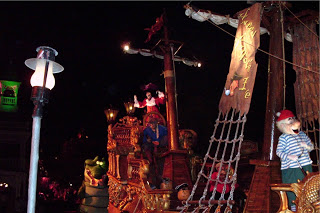 The next group is pirates, including Captain Barbossa and Captain Jack Sparrow high up on a treasure covered cliff. 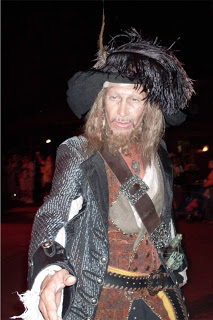 Now we’ve come to my favorite part of the parade: the Haunted Mansion characters. Fog covers the ground as the Caretaker, Dick O’Dell, leads his frightened dog through the mist. Ghostly ballroom dancers glide down the parade route followed by the Hitchhiking Ghosts standing on the steps of the Haunted Mansion. The dancers are not to be missed. They are eerie and beautiful at the same time. 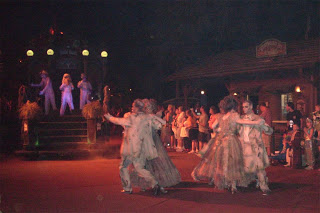 The gravediggers are also spectacular and do an amazing dance with shovels, including a move where they run the shovels along the ground and send up sparks. The next group includes characters from the early days of Disney and includes Horace Horsecollar, a group of cowboy dancer, and the Country Bears singing and playing on a float. 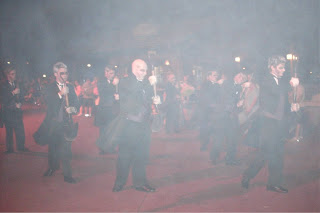 Brer Bear and Brer Fox join Chip and Dale in Western wear to escort several country girls down the parade, dancing as they go. Clara Cluck follows them in a giant barn. 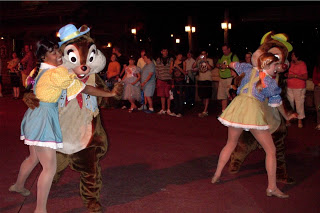 Next up is a pumpkin headed character on a large mirrored ball that spins and weaves through the parade. 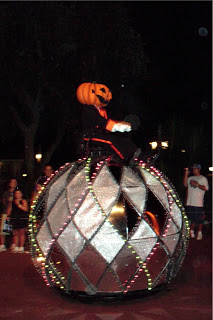 The villains follow, complete with their own skeleton band, and include the Queen of Heart, Cruella DeVil, the Evil Queen, the Sheriff of Nottingham, the Big Bad Wolf, Dr. Facilier,  and Jafar and Maleficent on a castle wall with a full size Chernabog peering over the top and often Ursula on the back. Shenzi, Bonzai, and Ed round out the villains and are followed by a candy corn waving flag line. Pluto and Goofy, riding in candy filled trucks, are the last to pass, with helpers who hand out candy to the children, ending the parade. 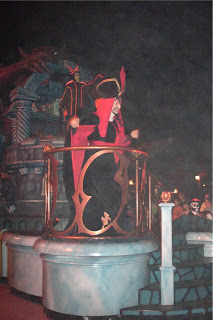 You’ll have two chances to watch the parade during the party. Diva Tip: If you have young children who may not be able to stay until the end of the party, I would recommend watching the earlier parade. The first parade is at 8:15 pm and the second parade is at 10:30 pm. I have watched the parade from several different locations, but would recommend finding a spot in Frontierland. The area between the Country Bear Jamboree and the Frontierland turkey leg cart, facing the Rivers of America is my favorite spot. It’s usually not as crowded as Main Street and the lighting is fantastic for taking photos.

The Boo to You Parade may change slightly from year to year and may include different characters, but it’s always worth taking the time to watch. Be sure to pick a spot about 20-30 minutes before the start of the parade to get the best seats. The parade lasts about 15 minutes and may have a few moments that are too scary for young children, such as the Haunted Mansion characters and villains. However, this parade is definitely one to watch.

Amy, the Pirate Diva, also shares her Disney obsession on the Disney at Heart blog.