Bring Back the Jawas! Mourning Another Loss at Disney’s Hollywood Studios 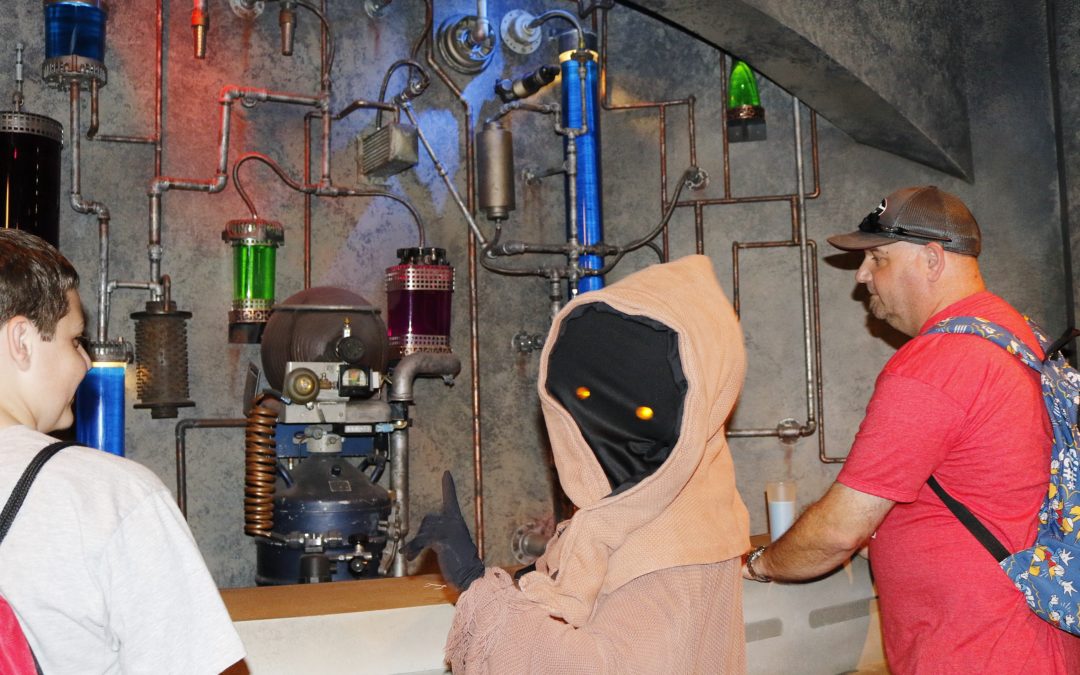 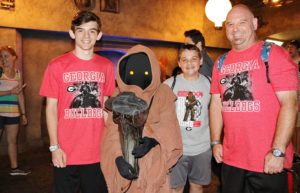 We are not just a Disney fanatic family, we also belong to the Star Wars fanatics club. We love to explore all things Star Wars when we head to Walt Disney World’s Hollywood Studios. We adore the Chewbacca meet and greet (read about how my son, nicknamed Chewie, got to meet Chewbacca here), we cautiously take on the Kylo Ren meet and greet. We watch the Storm Troopers from a distance, hiding our allegiance to the Rebel cause lest they find us spying and take us into custody. It’s safe to say, we love Star Wars. So imagine our surprise and dismay when the Jawas were removed from Hollywood Studios with no prior warning. We love the Jawas, how could this be? 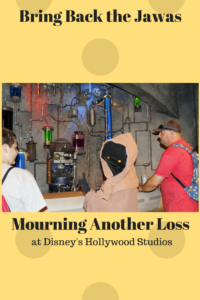 If you aren’t a huge Star Wars fan like us, and you aren’t sure what exactly a Jawa is, let me tell you a little more about them. Jawas are humanoids who stand at a little over three feet (although they do seem a little taller than that when you meet them in person). They stay completely covered by their rough brown hooded robes. All you can see of their faces consists of a tiny pair of yellow glowing eyes from within the folds of their hoods. They love to comb the deserts of Tatooine on their quest for scrap, discarded ship parts and androids which they use to sell and trade. I guess you could say they are a version of our own used car salesman. Interacting with the Jawas was an extremely fun way to fill in some time between those fast passes or when you duck in Launch Bay to get out of an afternoon rain shower. There were days when you could trade little trinkets with them, or days you could just interact and take photo’s with them. Regardless of the activity, you never left without a smile on your face. 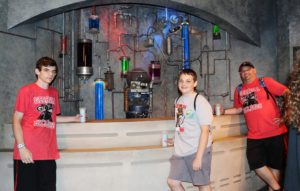 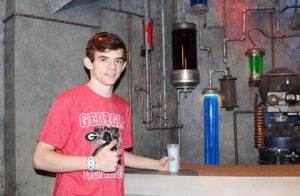 On our last trip, we forgot to bring our bag of trinkets full of items to trade with us, so we just asked for a simple photo, then stepped out of the way for others who did have items to trade to interact. As we stepped back, my husband noticed the Mos Eisley Cantina bar set back against the wall. We had never noticed it on previous trips, but as we had nothing to trade, we had more time to just look around this time. 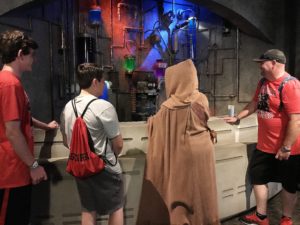 Fun with Jawas at Mos Eisley 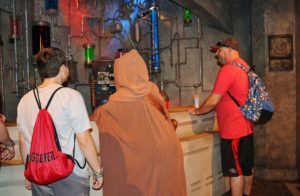 Trying to order a drink at Mos Eisley

It wasn’t long before we were spotted by a Jawa. The Jawa came over to the bar while my husband and sons were pretending to order drinks at the Cantina, and the Jawa pretended to order a drink for himself. There was a lot of gesturing and motioning going on. If you have interacted with the Jawas at any point, you will already know that they don’t speak, probably because they have a different language from us, Jawaese, so we wouldn’t understand them anyway. As you can see from the photo, we didn’t exactly have a bartender to see to our needs. 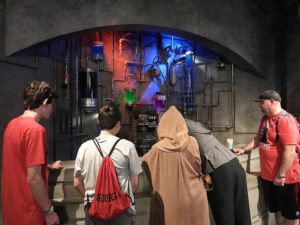 Ordering with Jawas at Mos Eisley 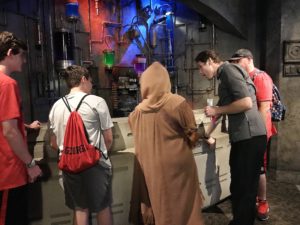 Fun with Jawas at Mos Eisley

Throughout the gesturing, it appeared the Jawa was suggesting there was a mechanical error behind the bar, preventing my guys from getting the drinks they ordered. He called over his “interpreter”, a nice Disney CM, who attempted to help “fix” the malfunction. There was a lot of pipe banging and rummaging around going on. It was finally determined that the problem was too difficult for them to fix, so the drinks would not be delivered. All in all, it was a very fun interaction with a Jawa that we weren’t even expecting to have. And now they are gone. Just like that, no warning, no hint of departure at the D23 Expo, nothing. They just disappeared, and now I, along with other Star Wars fans are devastated.

I do hold out hope though. Eventually, Star Wars Land will be opened at Walt Disney World’s Hollywood Studios. With the opening of Star Wars Land, I can’t imagine there won’t be a return of our beloved Jawas, just in a different location of the park. Of course, I’m not sure I’m brave enough to venture in to what I expect to be a crowd the likes of which Hollywood Studios has never seen once Star Wars Land opens. It may take a few years before it thins out enough for me to break through without being injured by a stampede. One day, though, I’m sure I WILL see these amusing used car salesmen, er..I mean junk trading Jawas again! Until then, I suppose you will find me at either Toy Story Midway Mania, Rockin’ Roller Coaster or Twilight Zone’s Tower of Terror, where I will be attempting to dry my tears and trying to have fun, despite the knowledge that there are no adorable Jawas around.

Have you been considering a Disney vacation, but aren’t sure where to begin? You can start by contacting our recommended travel agent, Patricia at All Dreams for Travel, and she can do all the work for you. Best of all, all of her services are FREE, all you have to do is click here to request a quote!