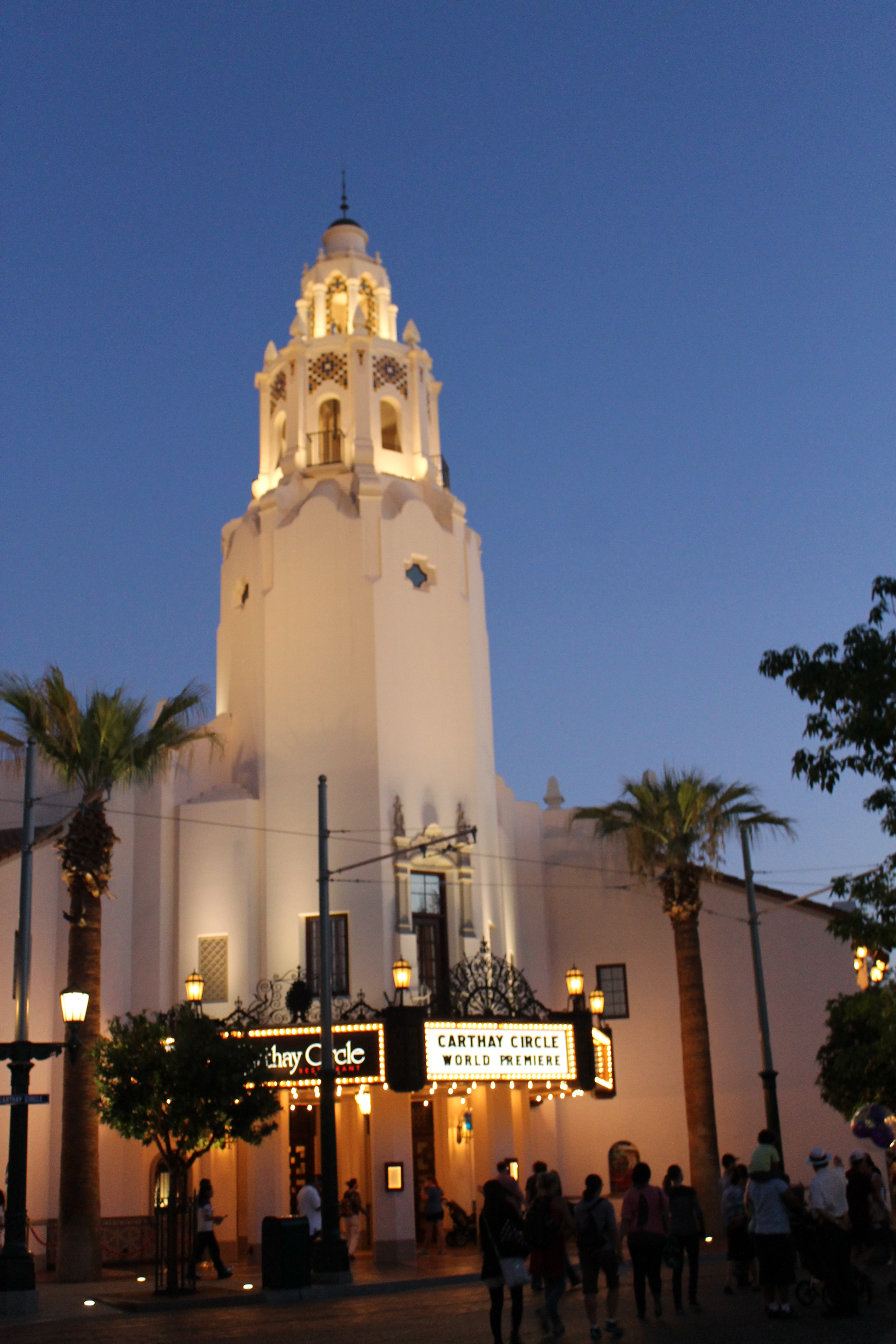 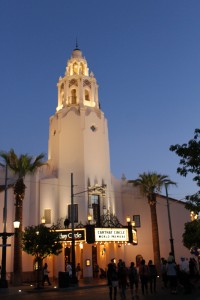 When Disney’s California Adventure first opened officially in 2001, the entrance was called the Sunshine Plaza and designed to look like a postcard from California. For sure, the big over the top lettering on the store fronts, bright colors and “surfer” music evoked many folks’ ideas about what California is like. It  was a fun area, set up much like Main Street U.S.A across the way at Disneyland: there were shops, restaurants and some fun stuff to look at it.

In 2007, when Disney announced that California Adventure was going to undergo a massive re-construction (adding Cars Land and re-theming rides to the tune of over $1 billion dollars), it was also announced that the Sunshine Plaza was going to be re-designed into  Buena Vista Street. While many of us Disney fans complained that the re-design looked A LOT like the entrance to Hollywood Studios in Florida, Buena Vista Street turned out to be one of my favorite parts about the massive re-construction. Yes, there are similarities to Hollywood Studios, but there are also some big differences. Officially, Buena Vista Street opened in 2012, which makes it one of the newer areas of California Adventure. Let’s explore it a little, shall we? 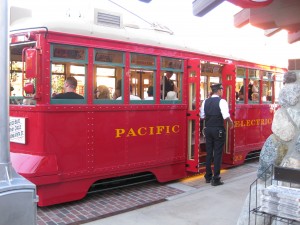 First and foremost, the former entrance was expanded and made to look like the entrance to the Pan- Pacific Auditorium. The history of the Pan-Pacific Auditorium in Los Angeles is a rich one. It opened in the mid-thirties and was deemed a wonderful expression of “modern” architecture. The Auditorium housed many sports events, music events and shows. It is unfortunate that the building is no longer standing- it burned in a fire in the 1989 after being closed for many years and neglected. It’s legacy lives on through Disney, however!

Once guests walk through the gates, they see a beautifully themed area themed to 1920’s and 1930’s Hollywood. This is about the time Walt Disney arrived in Hollywood. Like all Disney theming, there are amazing details and beautiful architecture. Trees line the street. Store windows display fun items, and of course, delicious candy treats. If guests are not amazed by the red trolley car that is rolling down the street, they might be impressed by the spectacular Carthay Circle Theater that sits at the end of the street. This building is a replica of the Carthay Circle where Snow White and the Seven Dwarfs premiered in 1937. 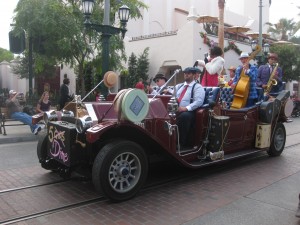 The Red Car Trolley is the main attraction on Buena Vista Street. This trolley is a replica of the Pacific Electric Railway cars that used to run through many areas of Los Angeles. While they were designed to be electric and run on wires, the Disney cars run on battery and the wires are simply for show. The trolley runs from the start of Buena Vista Street to the Twilight Zone Tower of Terror in Hollywood Land, with stops along the way. It is a fun diversion.

The Carthay Circle is an attraction of sorts, though it is mainly a dining place. Still, guests will be impressed just walking through the building. It is fun to take in the pictures on the walls (don’t miss the Seven Dwarfs premiere pictures!).

Buena Vista Street comes alive with street performers and they are not to be missed! There are citizens of Buena Vista street roaming around, looking for good conversation. There is are also performances by “newsboys” on the trolley cars and a travelling car of jazz performers called “Five and Dime.” Your favorite Disney characters can also be found up and down the street.

I have mentioned the Carthay Circle dining, and there are two options for eating in the “theater.” The first is in a lounge, which is a much more casual and smaller food portion way to enjoy the Carthay Circle Restaurant. It is also more economical, for those on a budget. The second dining option is the restaurant, which serves FABULOUS meals like thick cut pork chops with thyme roasted pears and sesame soy glazed salmon with forbidden black rice stir fry.

Those looking for a Starbucks fix can stop by the Fiddler, Fifer and Practical Cafe for a cup of coffee or tea. You can also find pre-made sandwiches and tasty pastries and treats here- including the very tasty frosted Mickey cookie.

However, if you are looking for a treat, right next door there are two tasty options: Clarabelle’s Hand- Scooped Ice Cream Parlor and Trolley Treats. 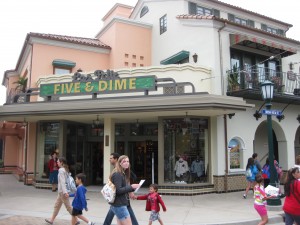 Shopping is plentiful on Buena Vista Street. Oswald’s Gas and Oil is the first shop at the entrance and it sells things like hats, sunscreen, water bottles and some fun merchandise like plush toys and hats.

Elias and Co is a large shop, a replica of what downtown shops used to look like (think before strip malls and shopping malls). Here, guests will find clothing, tote bags, hats and fun souvenirs.

Big Top Toys is  THE place for kids to find that Rapunzel doll or Minnie Mouse purse.

Kingswell Camera Shop is the place to order your park pictures and pick up photo supplies.

So the next time you visit Disney’s California Adventure, be sure to spend some time on the extra special Buena Vista Street.