There is one ride in the Magic Kingdom that I could ride over and over again and never get bored… Buzz Lightyear’s Space Ranger Spin.

Based on one of the most popular characters from the Toy Story series, this ride is a blast, literally. Located in the Magic Kingdom’s Tomorrowland, the Space Ranger Spin is part ride, part game, and all fun.

The queue sets the stage for the ride to come. It is full of star maps and battle plans from Star Command. A 6-foot-tall Buzz Lightyear with a digital face is there to recruit you for a mission of the utmost urgency – save the galaxy and defeat the evil Emperor Zurg by stopping him from stealing crystollic fusion cells (batteries).

You board your vehicle on a moving walkway similar to the on in the Haunted Mansion. The futuristic XP-37 Space Cruiser will comfortably fit two adults. Although the vehicle has room for 3, there are only 2 ion cannons in each vehicle, so I would recommend that only two people ride in each vehicle so that everyone can play.

Once aboard, a cast member lowers the console across your lap. This activates your ion cannon and scoreboard. Buzz gives you instructions on what to target, and you’re off.

Your goal is to accumulate as many points as possible by aiming your ion cannon at the lightning shaped Zs and pulling the trigger. The ion cannon will continually fire if the trigger is held down, which can help small children earn a higher score. The small score board near each blaster keeps track of each player’s score. A joystick in the center of the console allows players to rotate the Space Cruiser so that you can find additional targets. Each target has a point value. The targets that don’t move and are closest to your spaceship are worth the least points. Diva Tip: The targets that are farthest away, and often move, are worth the most.

You travel through 10 rooms full of targets in your battle with Zurg. Each room has targets of low and high values, as well as secret targets that can help you to quickly max out your points if you find them.

My favorite is in the battery room on the right hand side toward the back. I believe it’s worth 25,000 points each time you hit it. There are also targets worth 100,000 points, but I’ll leave it to you to find them. My family loves to compete for the high score on this ride. When my niece was really little, my family would make her ride with me in an attempt to stop me from beating them. Unfortunately for them, no matter how often she used the joystick to swing the Space Cruiser around, I still beat them!

At the end of the ride, after the dark tunnel, you will find a giant Zurg in his ruined spaceship. At this point, your ion cannon is turned off and your score is tallied. The vehicle turns to face Zurg and your photo is taken. Near the vehicle exit is a chart which will tell you what level you’ve achieved, from Space Cadet to Galactic Hero. Here is a breakdown of the scoring: 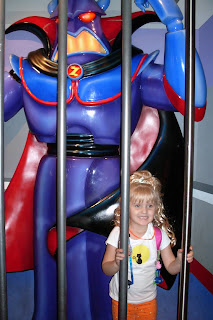 After exiting the ride, a wall of screens to your left display the ride photos, complete with scores. Pick out your photo and a cast member will write down the number for you so that you can purchase it. If you have purchased the Photopass Plus package, the photo can be added to your Photopass. To your right in the photo purchase area, you can see Zurg behind bars. This is a popular spot for photos, as most kids like to get in jail with Zurg.

Although there are times, especially during the rainy season when Buzz Lightyear’s Space Ranger Spin will have a 5 minute or less wait time, lines can get very long for this popular ride. I would recommend getting a Fastpass if the posted wait is longer than 25 minutes.

Scream factor: 1 This is a dark ride, but it’s unlikely to scare anyone.
Height Requirements: none
Wheelchair accessible, a special car is available for easy transitions.
Hidden Mickeys: there are several hidden Mickeys in both the cue and the ride itself

Diva Tip: Try to ride in the morning or late at night, especially during Extra Magic Hours.