California Adventure from A to Z 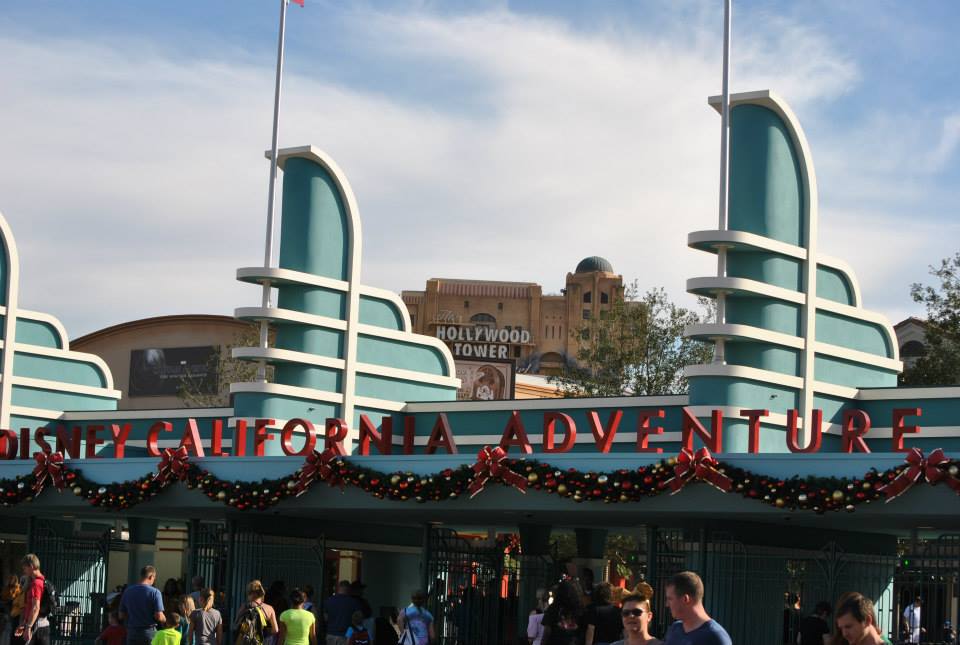 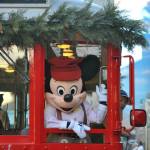 When I originally began writing my article for Disneyland from A to Z, I intended to combine both parks. But there are so many great things about each location, that I decided they needed their own “A to Z” lists. So here are my picks for California Adventure from A to Z: 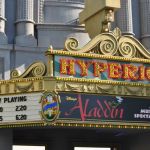 A: Aladdin: the Musical-  A Broadway style production of the classic 1992 film, Aladdin, can be seen at the Hyperion Theater in Hollywood Land in California Adventure.  The show is about 45 minutes long, and can be seen multiple times throughout the day. Disney Diva Tip: Get there early for great seats! 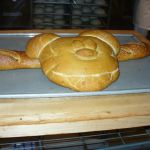 C: Character Meals-  California Adventure is home to the popular princess dining experience at Ariel’s Grotto. Ariel and some of her princess friends make appearances over the course of your meal. Disney Diva Tip: There is also a World of Color Dining Option available if you plan on seeing the show. 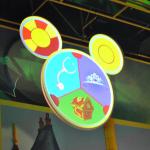 D: Disney Junior Live on Stage! – California Adventure hosts a live, interactive puppet show focused around the Mickey Mouse Clubhouse gang trying to plan a party for Minnie Mouse, and their trusty friend, Toodles. The show is cute, and my kids (who were 2 ½ and about 8 months old at the time) loved it. Disney Diva Tip: With any of the Disney entertainment shows, it is best to arrive early.

E: Emergencies (Medical)– If it is really serious, obviously the first thing to do is call 911 or contact a cast member. But if it isn’t a life threatening emergency and you just need some basic first aid, there are first aid centers in both Disneyland and at Disney’s California Adventure. In addition to helping with small medical issues (think headaches, small cuts, blisters etc), they can also store medications which require refrigeration. In California Adventure, First Aid is located next to the Guest Relations Lobby on Buena Vista Street. 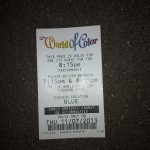 F: Fastpasses- Disneyland and California Adventure still use paper Fastpasses. If you’re not sure what a Fastpass is, Fastpasses are a free way to guarantee that you can go through an accelerated line. The catch is that you can only use your pass for a 60 minute window and you can only have one at a time. Disney Diva Tip: Not all Fastpasses are created equal. Fastpasses for World of Color and Radiator Springs Racers go fast so get them first thing when you arrive at the parks. Also, on slower attendance days, Fastpasses may not be available, as the ride wait times do not necessitate it. 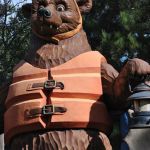 G: Grizzly River Run-This is a great water ride, and a perfect way to cool off on a hot day. You climb aboard your raft and proceed over many rapids. Disney Diva Tip: If you don’t like getting wet, bring a poncho and a change of clothes! 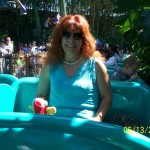 H: Heimlich’s Chew Chew Train– Located in A Bug’s Land, this is a great ride (especially for your littlest ones) where you can climb aboard Heimlich and wind your way through a field of candy corn and other yummy treats that Heimlich will be more than happy to point out along the way.

I: It’s Tough to be a Bug- This is a 3D show that is extremely interactive. Animatronic versions of Flik and Hopper make appearances throughout the program, and there’s a pretty catchy song in it too. Disney Diva Tip: This may not be the best attraction for small children, or those who don’t like unexpected experiences.

J: Jumpin Jellyfish- If you don’t have the courage to try the “Hollywood Tower of Terror”, you may consider this as a milder alternative. It is similar in the sense that once on board, you go up and down repeatedly, but at much slower speeds. 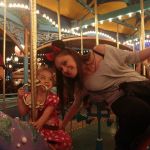 K: King Triton’s Carousel– Located near Paradise Pier, this is a great ride for someone to take the kids on while other family members ride Screamin California. This carousal features sea creatures and is fun for the whole family. 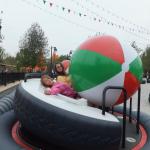 L: Luigi’s Flying Tires– Luigi’s Flying Tires is based off of an old Tomorrowland ride, “Flying Saucers,” only now with a Cars themed twist. You move across the floor like a giant air hockey puck, and you steer your tire by leaning in the direction you want it to go.

M: Monster’s, Inc. Mike and Sulley to the Rescue-  Similar to other Disneyland dark rides such as  Snow White and  Pinocchio, you will find in Fantasyland. In this ride, Boo is loose in Monstropolis, and you go through the course of the ride following scenes from the movie as Mike and Sulley try to return Boo back to her home. 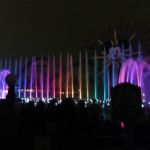 N: Nighttime Show: World of Color– World of Color is a nighttime water show that takes place around Paradise Pier. It highlights many Disney movies, and also has very impressive light and pyrotechnic displays. This show does come with Fastpasses, and there are two viewing sections (yellow and blue). Disney Diva Tip: It is important to start lining up near the Fastpass entrance about 30 minutes before your Fastpass time slot.  You will need to stand the entire show, so be prepared. 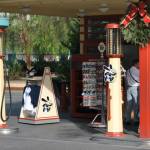 O: Oswald the Lucky Rabbit- One of Walt Disney’s earliest character creations, Oswald was around in the late 1920’s, and starred in 26 cartoons produced by Walt Disney. Unfortunately, Walt lost the rights to his character in 1928, which cleared the way for Walt’s next big character sensation- Mickey Mouse. After regaining the rights to Oswald back in 2006, Disney has been re-releasing the Oswald cartoons, as well as featuring him in various video games and merchandise. And as of Sept. 2014, Oswald, is finally making his debut in California Adventure as a Meet and Greet Character on Buena Vista Street. You can also find Oswald merchandise nearby his meet and greet at “Oswald’s Filling Station”.

P: Princess Dot’s Puddle Jump- California can be HOT. Having a place to cool down is always a perk. This cooling off station features water play with water spouts. Disney Diva Tips: There are family restrooms near the Puddle jump that your family can use to change into dry clothes, just be sure to bring a bag to put the wet clothes in! 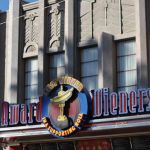 R: Radiator Spring Racers– One of the most popular rides at California Adventure, you can find this ride over in Carsland, where you not only see scenes from the popular Cars movie, but you also get to “race” another car full of guests. Disney Diva Tip: As mentioned before, this ride is EXTREMELY popular (several people I know think this is the best ride at either park), and Fastpasses are available… but go quickly. Get your Fastpass for this attraction first thing in the morning! 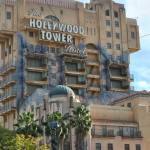 T: The Hollywood Tower of Terror- This is a great thrill ride, where you are literally lifted off of your seat as you go up and down on a “service elevator.” Not surprisingly, this is one of the rides where your picture is taken, so you can always bring that home to commemorate the occasion.  Disney Diva Tip: It may be a personal bias, but my husband (who has ridden this ride both in California Adventure and in Hollywood Studios in Orlando) swears that the California version is MUCH better than the Florida version as far as the drops and level of thrill goes. Is it true? I don’t know. But I’m sure you wouldn’t mind trying out both to see if he’s right. 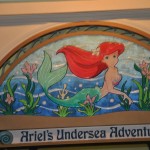 U: (Ariel’s) Undersea Adventure- Like the Monsters Inc., Mike and Sulley to the Rescue attraction, Ariel’s Undersea Adventure is a dark ride. You climb into a clam shell, and make your way through the highlights of “The Little Mermaid Story.” This is a great ride for small children, and usually the line isn’t too bad. Disney Diva Tip: It’s also a great place to hang around while waiting for The World of Color lines to open up in the evening since its right nearby the entrance to turn in your Fastpass.

V: Disney Visa– If you have a Disney Visa Card, head on over to Hollywoodland to get a free 5×7 with a Disney characters are at that location anytime between 10:30 AM to 1:30 PM. (It’s behind the “House of Cards” and next to Monsters Inc. Mike & Sulley to the Rescue!) 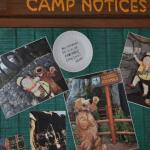 W: Wilderness Explorers– Like Russell from the movie “Up,”  you too can participate in Wilderness Explorers activities and try to earn badges for completing certain tasks. You can also partake in the Wilderness Explorers Ceremony, which takes place throughout the day (though you’ll want to check the guide out for exact times), and as an added bonus, you’ll also get to meet Russell and Dug! 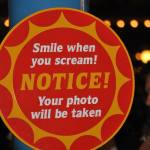 X: “X”-hilirating Thrill Rides- California Screamin’, The Hollywood Tower of Terror, Radiator Spring Racers, Soarin’ Over California, are just a few of the thrilling rides in California Adventure that you don’t want to miss. 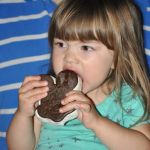 Y: Yummy Snacks– Churros, pretzels, Mickey Mouse Bars, the list goes on and on for yummy snacks at California Adventure.

Z: Golden Zephyr- Another Paradise Pier attraction, the Golden Zephyr looks like a rocket, and is somewhat similar to Dumbo or the Astro Orbiter at Disneyland in the fact that it raises you off the ground and spins you in a circle. Unfortunately, due to the nature of the ride, it is very sensitive to winds and can sometimes be closed due to that.