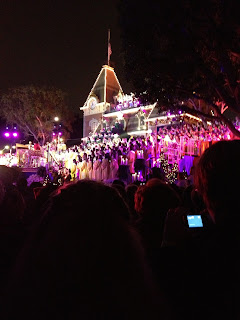 The Candlelight Processional has been a holiday tradition at the Disneyland Resort since 1958. This amazing holiday show takes place just outside the town center square, directly in front of the Main Street Train Station. Usually, the ceremony takes place over two days, a weekend. If you have ever been to Disneyland, you can imagine how crowded this area must become during the show. As an annual passholder, I have had it on good authority to AVOID going to Main Street or Disneyland during the Candlelight Processional weekend.

This year, however, things changed. The Disneyland Resort announced that the Candlelight Processional would be held over 20 nights (twice a night), with specific nights having seating for annual passholders (to be determined through a lottery). Having never seen the show, but hearing wonderful things about it, I was thankful when my mother won the passholder lottery and had tickets for Sunday evening, December 16.

Now, one does not HAVE to have tickets to attend the Candlelight Processional. If you do not have tickets, you are welcome to attend. You will, however, have to stand and believe me when I say it gets crowded- so you may be standing awhile! Those with special seating needs will be accommodated, just ask at guest services.

So, what is the Candlelight Processional show? It is a re-telling of the Christmas story through narration and song in the Main Street Town Square. Tradition has celebrities re-telling the story and local choirs and Disneyland musicians performing. Over the years, celebrities such as Dick Van Dyke and Cary Grant have been narrators.  A friend of mine who attended the ceremony last week, saw Dick Van Dyke narrate and it was a moving experience to hear and see such a Disney celebrity speaking. It happened to be his birthday and when the crowd joined in a verse of  “Happy Birthday,” he humbly proclaimed “Thank you, but it’s not my birthday we are here to celebrate!” 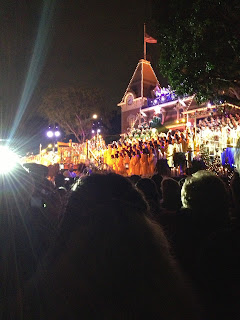 On Sunday, December 16, Patricia Heaton was the celebrity narrator. The front of the Main Street Train Station had been transformed into a beautiful Christmas picture. There were glowing lights, white poinsettias, Christmas pine and specific stages set up for musicians and choir members.

We had to check in at the front gate once we arrived at the park to get wristbands. These wristbands told cast members which show we were attending and allowed us to line up just inside the main gates roughly a half hour before show time. When we arrived a half hour before showtime, the line was significant  however, so getting there earlier probably would have been better.

Once cast members seated us, the wait for the show was short. It was misty, having rained earlier in the evening and the cast members had given everyone a disposable towel with which to wipe their wet seats.

The show began with an orchestra Christmas song. Soon after, the area grew dark and then the choir members entered town square singing by candlelight only. It was beautiful. The show told a beautiful story, that began with narration and followed by song. The music was beautifully sung, and played. The narration was powerful. The show ended with Hallelujah Chorus and most of the members of the audience stood. Tradition holds that the King of England in 1743 heard Handel’s The Messiah (Hallelujah Chorus ) for the first time and was so moved that he stood, and of course, then the rest of the audience had to stand. It was nice to see that tradition still alive!

See it and prepare to be moved!