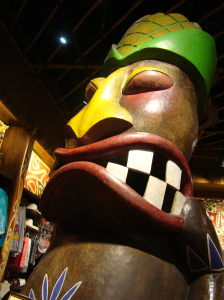 Located on the ground floor of the illustrious Polynesian Village Resort, Captain Cook’s is a counter service restaurant well worth any Walt Disney World guest’s time. The location recently received an update during the summer of 2014 as part of the overall Polynesian renovations and looks better than ever. In addition to the new look, the restaurant received a new menu as well. Previously, Captain Cook’s was the only place outside of Aloha Isle in the Magic Kingdom that served the famous Dole Whip, but after the renovation, it is no longer featured there. Fortunately, the Dole Whip now has its own stand, Pineapple Lanai, just outside Captain Cook’s.

I can’t speak for the improvements of the renovation as this was the first time I had visited Captain Cook’s. What I can say is that I enjoyed the interior of the restaurant. Food is ordered cafeteria style at the counter, and drinks and desserts are in a cooler next to it. There is only one double-sided cashier counter, which wasn’t busy when we dined there, but I can imagine it might be in the morning. The dining room is very open with lots of windows to view the beauty of the resort grounds. There is a definite island feel to the area, and great retro-style travel posters adorn the walls.

Captain Cook’s menu features a lot of island inspired dishes. For breakfast, you’ll find standard fair like Mickey Waffles and eggs, as well as the popular Tonga Toast (Banana-stuffed Sourdough Bread, Battered and Deep-fried, and dusted with Cinnamon Sugar). For lunch and dinner, you’ll find a lot of familiar dishes with an island flair. Notable entrées include Coconut Curry Meatballs, Hot Beef and Cheddar with Caramelized Onions and Sweet Chili Mayo on House-made Bread, Chicken and Waffles, and Fish Tacos. 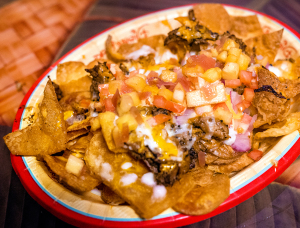 Honestly, I wanted to try a little of everything. I ended up going with the Pulled Pork Nachos, topped with Onions, Cheese, Spicy Mayo, Tomatoes, and Pineapple Salsa. My wife had the Aloha Pork Sandwich, Pulled Pork on a Pineapple-Coconut Bun with Cheddar, Asian Slaw, Cucumbers, and Tomatoes. We both agreed we loved the island twist on the dishes. The spicy mayo combined with the pineapple salsa really gave the nachos a distinct flavor. The plate was huge and I had trouble finishing it all. The pork sandwich was very good as well, and only made us want to come back and try more items on the menu. 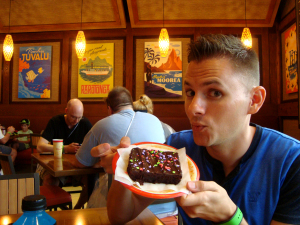 If you are staying at the Polynesian, Captain Cook’s is one of the best counter services locations at any resort. If you are not staying there, I highly recommend making the trip over there. The food is excellent, and any reason to stop at the Polynesian is welcome. We actually left the Magic Kingdom, hopped on the monorail, and enjoyed a quick lunch there, before returning to the park. It was our first time and I’m very glad we discovered this hidden gem. Between Captain Cook’s, and the fantastic Ohana, The Polynesian Resort has some of the best dining options of any of Disney’s hotels.

Captain Cook’s accepts the Disney Dining Plan and will cost you one counter service credit for a meal, or a snack credit for small items such as brownies or fruit. They serve breakfast, lunch, and dinner, and also have alcoholic beverages. It offers a wide variety of entrees with a unique twist and will satisfy both picky eaters and anyone looking for something new.