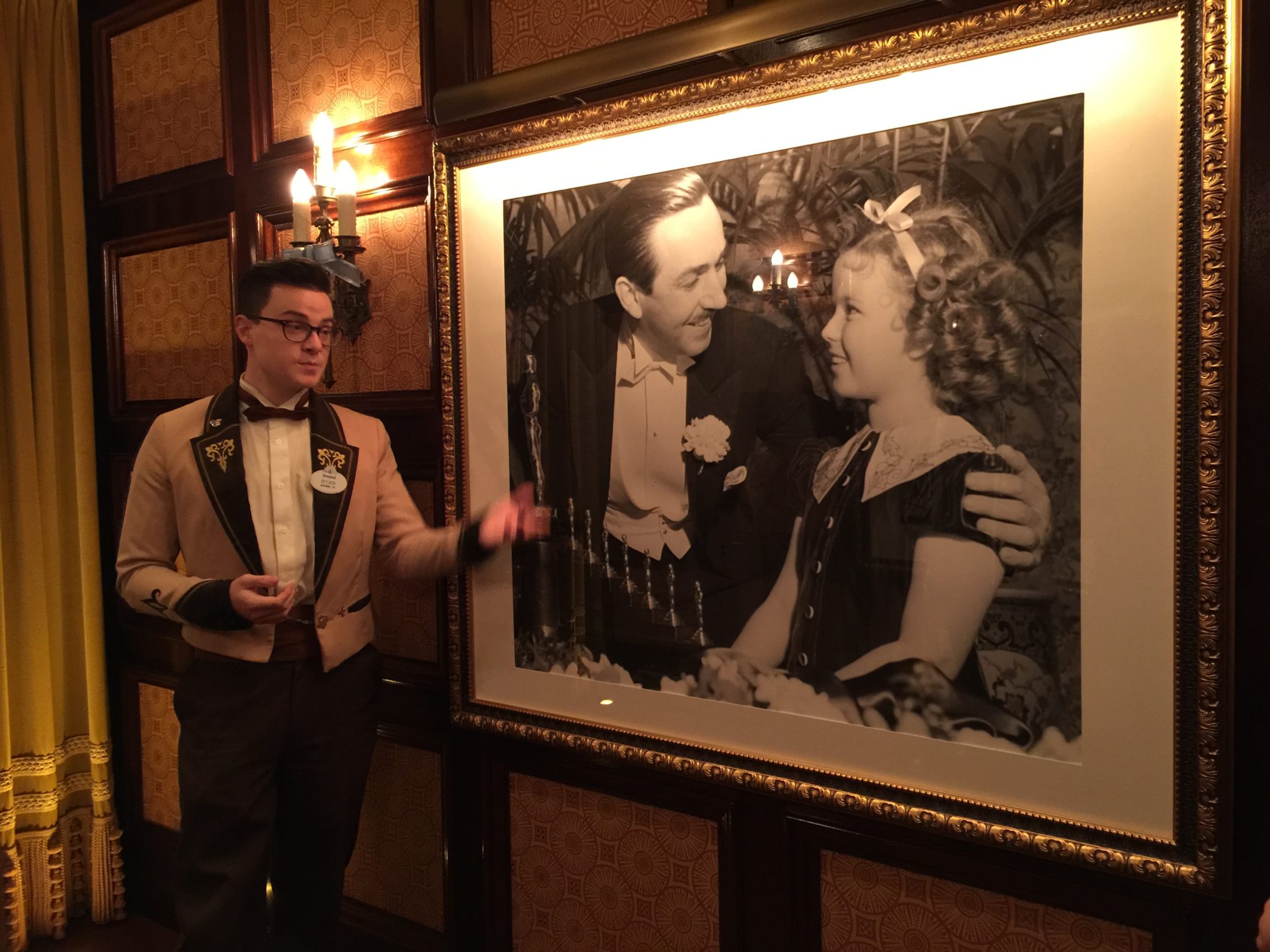 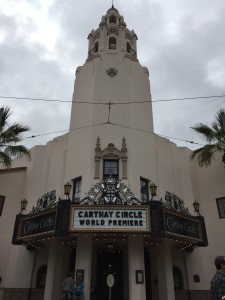 It’s popular on mornings in Disney’s California Adventure to race through the park to get Fastpasses for Radiator Springs Racers or jump in line for Toy Story Midway Mania. I can see why many choose these routes, I mean lines are so much shorter! But every morning I see people rush right through Buena Vista Street, ignoring one of the best hidden gems of the park! They walk right past the towering Carthay Circle Restaurant without even knowing that inside you can travel back in time to the days of Walt Disney and his first movie premiere. Come on, doesn’t that sound cooler than pushing through the mass of people just to ride a ride you may have already ridden 5 or 6 times? I suggest that the next time you have the choice to hang out with Walt or jump into a mob of people, you go with Walt! 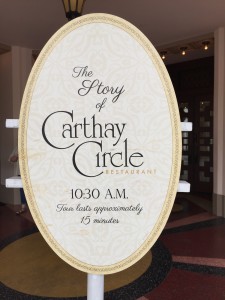 If your having trouble deciding let me give you a rundown of what the Carthay Circle Restaurant Tour is all about. There are only a couple of tours a day (so exclusive!) and since not many people know about them, you get a small bunch of people in your group. Once my mom and I were on a tour completely by ourselves – it was magical! The Cast Members directing the tours are very knowledgeable about the history of the Carthay Building and its history in relation to Walt and are filled with little nuggets of wisdom. One CM in particular, Ryan, is the reason for the tour in the first place. Ryan is a historian of sorts, just filled with knowledge of Walt Disney’s life. If you are lucky to have him as your tour guide you will not be disappointed!

The CM’s begin the tour at the entrance to the lobby of the building. There you will learn about the Carthay Circle Theater Building itself. The real theater was built by John McCarthy and incorporates a lot of Mission style architecture with a sort of “pioneering west” vibe for the interior honoring McCarthy’s father.  The restaurant in DCA is 3/4 to scale of the original and there are pictures of the building during different years on the walls to get  a larger understanding of its depth. But what about Walt Disney?

Disney premiered his first animated film, Snow White, at the Carthay Circle Theater in 1937.  He expected about 3,000 people to come to the premiere, and was floored when 30,000 people actually showed up!

As you walk past a bouquet of lillies (in honor of Walt’s wife Lillian Disney) you enter the lobby of the restaurant taking you back to 1937 as you walk the “carpet” with Walt Disney. Lamps made from the company who created the original lamps in the Carthay Theater tower above you and on the walls you will notice classic black and white photos of Walt Disney and several celebrities including Shirley Temple who awarded Disney with 8 Oscars (1 for him and 7 for each of the dwarves) for Snow White, Judy Garland, and Mary Poppins herself: Julie Andrews. 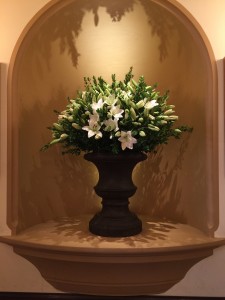 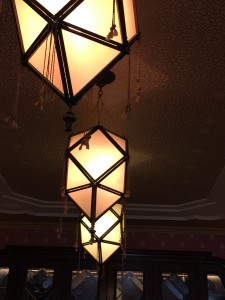 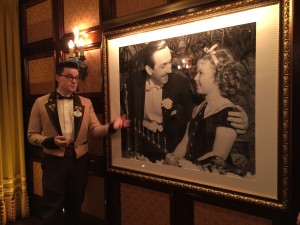 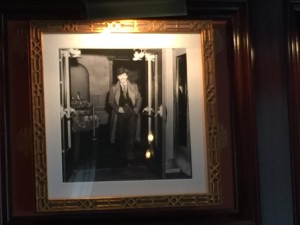 There is one picture in particular that stands out from the rest. Have you ever noticed the crucial “Disney Two Fingered Point” that Cast Members are known for around the parks? Well it was modeled after photos of Walt Disney doing the exact same point. However there is one little snag. He used two fingers because he was holding a cigarette! To keep his image, Walt Disney had the cigs edited out of all the photos of him. All except for one located in the Carthay Circle Restaurant lobby. 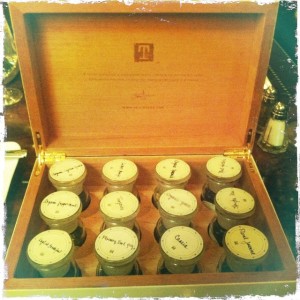 ther parts of the lounge include a shadow box filled with memorabilia provided by the Walt Disney Family Museum in San Francisco. The  items change out every 3-6 months with a new theme so each time you visit it will be different. There is also the Carthay Circle  Bar which serves alcohol as well as lovely pots of tea on cold rainy days (try the Mad Hatter Blend!).

You soon head upstairs to the actual restaurant part of the building. You’ll notice that all the tables point towards the open kitchen (serving as the “theater” where everyone watches the magic happen). All through the second floor dining area are subtle themes of Snow White. The ceiling contains a mural of the Enchanted Forest (and yes there is a Hidden Mickey!) while the Evil Queen lurks around you. The chandeliers are reminiscent of the Evil Queen’s crown and even have a dangling apple. And it is rumored that the silhouette of the Evil Queen is etched into the wooden tables. Can you see her? 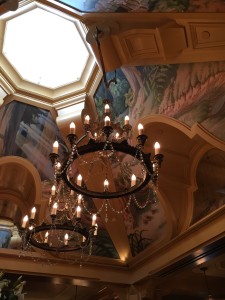 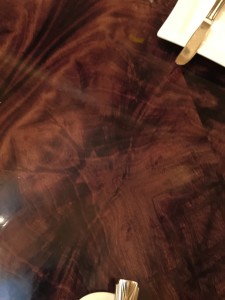 There are several dining rooms in the Carthay Circle Restaurant, and some are very exclusive. Aside from the Club 33 lounge on the third floor, there are the Hyperion and Buena Vista private dining rooms (request only). The main private dining room is actually the inside of the round turret part of the building you see from the street.  This room requires a $1,000 down payment to reserve but is absolutely worth it! Seated with private doors you eat at a table which is actually Snow White’s wishing well at the base. There are two very important pictures in this room. The first is the very first picture of Walt Disney with Mickey Mouse together. And the last is the very last picture of Walt Disney and Mickey before he passed. I could cry just thinking about it! 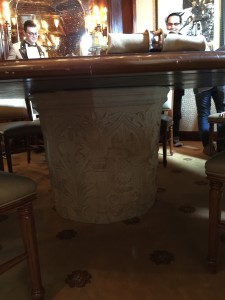 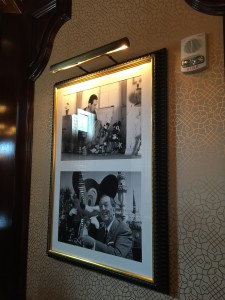 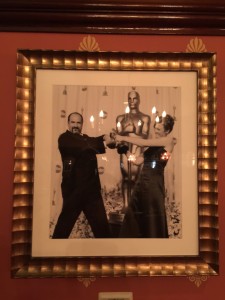 There is also a Hollywood Room seating area for guests to dine in that is all about award season! Pictures of Walt Disney all the way to the creators of Frozen fill the walls. This regal room is all about celebrating Disney’s achievements and it is grand. Other rooms include the East and West Sunrooms and a balcony that are all very fancy and filled with pictures of Disney’s film history. The balcony is a great spot to request if you want to watch 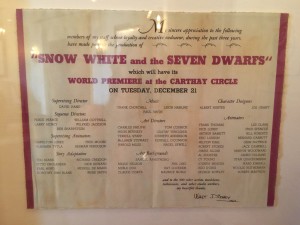 the fireworks (the music is piped in from Disneyland!) and you can get a front row seat to the Pixar Play Parade as well. It is also rumored that Disney producers are known for dining in the Sunrooms and sketching Cast Members and Guests Disney style! Be on the lookout!

As you head to the elevator to end your tour of the second floor be sure to stop at the bathroom! Other than the fact that these restrooms are absolutely amazing and fancier than all get out, hidden in the Women’s bathroom is an odd light fixture that doesn’t quite match the surroundings.  That’s because it is a light from the Tower of Terror Ride! It’s like a hidden gem in the hidden gem that is the Carthay Circle Restaurant! 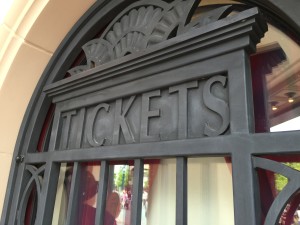 So in total, you left a modern day Buena Vista Street and entered the Carthay Circle Theater in 1937 as if at the Snow White Premier with Walt Disney himself! You walked the carpet (lounge) met some celebrities (pictures), watched a great film (“dined” near the kitchen), and even attended the awards show (Hollywood Room)! Doesn’t that sound AMAZING?! I don’t think you could return to Buena Vista Street without feeling like you’ve had an epic Disney experience.

Now it’s your choice: fight the crowds to ride a race car or play in a toybox – or get your “tickets” to a premier that takes you back in time and teaches you new things! Ok all of those choices sound good – but opt to try ALL of them the next time you are in Disney’s California Adventure!

And once you get a feel for the Carthay Circle Restaurant, try making a World of Color Dining package there for lunch or dinner with the help of our Disney Travel Agent Patricia at All for Dreams Travel! I can personally tell you that their signature biscuits with jalapenos are to die for! YUM!