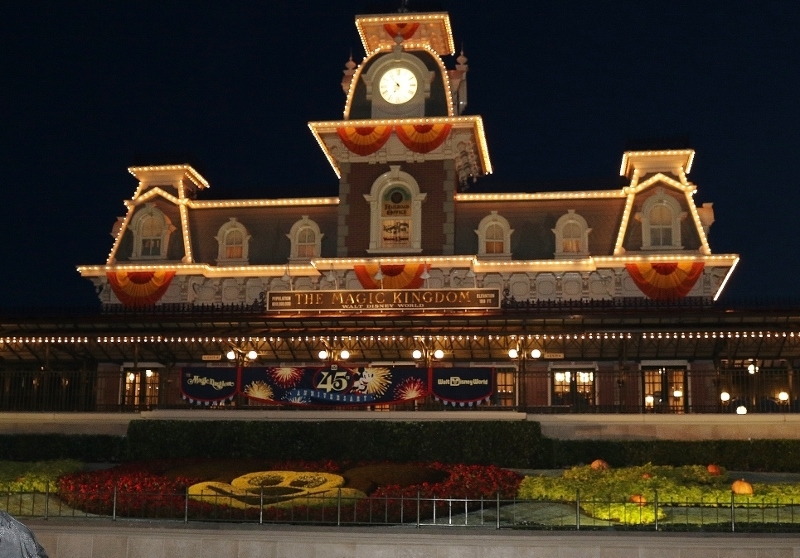 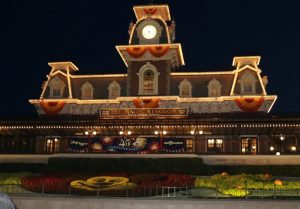 We had already scheduled our fall 2016 vacation, when it occurred to us that we would be there on October 1st, which was Magic Kingdom’s 45th anniversary.  Normally, we schedule our park days around the crowds, trying to hit the parks with the lowest crowd count.  But….Magic Kingdom’s 45th?  Come on, that’s a BIG deal!  We knew we had to bite the bullet, crowd wise, and be at Magic Kingdom that day.

We start our days very early, as we like to be at the parks at least an hour (if not more) before rope drop.  We got to the entrance with a plan in mind.  Our plan was for my husband to go quickly purchase the special anniversary items we had already picked out, then meet on Main Street, so we could hit a ride or two before the special show in honor of the 45th anniversary on stage at Cinderella’s castle.  We knew as soon as we got there we had miscalculated in our thought process.  We are used to being some of the first families at the parks, but the special event brought out quite a crowd, and every one of them were in a special line created to go purchase 45th anniversary merchandise.  I sent my husband off to join the long line with a heartfelt wish of good luck that he not get stampeded once they let everyone in.  My two sons and I quickly grabbed a 45th anniversary park map, as well as an awesome 45th anniversary button, which were free to guests as long as they had supplies.

After another amazing welcome show (I do LOVE the welcome show at Magic Kingdom), my sons and I made a bee line for Casey’s Corner, so we could sit and wait for my husband.  That’s when he called and told me that the line was too long for us to wait and waste park time, and he suggested we just go ride a few rides without him.  I felt a little guilty, I mean, in my head I was picturing him fighting a crowd of zombies, climbing over other over-zealous guests, to grab the last 45th anniversary trading pin, while me & my two sons were having a grand ole time enjoying all that Magic Kingdom had to offer.  He assured me, though the line was long, Disney Cast Members were doing an excellent job of keeping them controlled and moving.  I asked my guys what they wanted to do, and they suggested Buzz Lightyear Space Ranger Spin.

As we headed to Tomorrowland, I noticed people were already staking out spots to watch the anniversary show at the castle.  My two sons and I did hit Buzz twice, attempting to get that coveted Galactic Hero title, but weren’t able to get our scores quite that high.  I suggested that perhaps we should go ahead and pick our spots to see the show at the castle, and I’m so glad I did.  Not long after we got a pretty good spot, others had the same thought in mind, and closed in on us.  My husband finally finished purchasing the merchandise and managed to find us in the crowd. 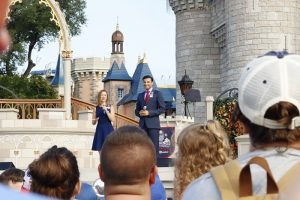 Did I mention how thankful I was to get a good spot?  The special show began with Walt Disney World ambassadors, Nathaniel Palma and Caitlyn Busscher, coming on stage and welcoming the guests.  They were upbeat and energetic, which set the tone for the special show.  They quickly brought out 45 of the most beloved characters at Walt Disney World onto the stage, to the huge excitement of the crowd. 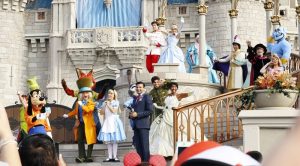 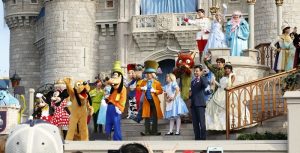 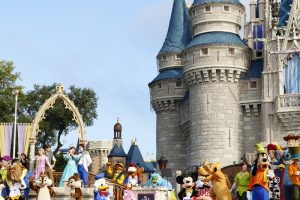 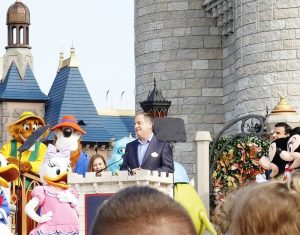 We were thrilled to see so many characters at once, and we definitely let it be known by our cheering.  Soon after that, Nathaniel and Caitlyn introduced the guest speaker, none other that the president of the Walt Disney World corporation, George Kalogridis.  Mr. Kalogridis delivered a wonderful speech, as well as a very strong hint that Walt Disney World will be adding more attractions, that have not been revealed yet, in the future.  After his speech, Mr. Kalogridis brought out a group of singers, each one dressed as a cast member from various attractions, who sang an amazing version of “When You Wish Upon A Star,” ending with fireworks. 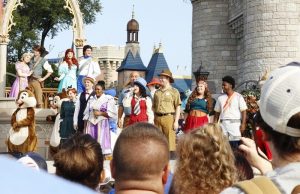 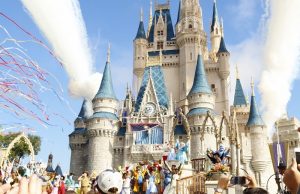 At this point, a huge banner was supposed to drop, with the same 45th anniversary logo that was on all of the merchandise, but things happen, of course, and for some reason, the banner became tangled on itself and didn’t drop.  The entire show seemed to last less than 15 minutes, but it was an exciting 15 minutes.  The crowd disbursed extremely quickly, and we were off to enjoy the rest of our day.

We knew it was going to be a very crowded day, so we decided to just go with the flow.  We did manage to ride everything we wanted, though.  Deciding that perhaps, since it was so busy, we would do something we had never done before, we elected to leave the park after eating dinner and try out the resort pool.  Things didn’t quite work out as we expected, however.  We had made reservations at a restaurant in Magic Kingdom that we had yet to try.  They have a reputation for having strange foods on the menu, and are never really busy, so imagine our surprise when we had to wait almost an hour passed our reservation time, because they were packed that day.  It seemed that diners went in, but didn’t really want to leave.  We did finally get into the restaurant, and actually enjoyed the meal, despite the strange menu, but as we were eating, a torrential downpour hit outside.  By the time we made it back to our resort, we were all drenched through, and no longer in the mood for a swim.

All in all, though there were a few hiccups in our day, we managed to have a wonderful time.  I don’t understand how you can’t have a wonderful time when you are at Walt Disney World, though.  Yes, it was crazy crowded.  Yes, we didn’t factor in how many people would be there to buy merchandise.  Yes, we were extremely late getting in to our reservation.  And, yes, I would do it again in a heartbeat.  As a matter of fact, my husband and I are already talking about being there for Magic Kingdom’s 50th anniversary.  How could we not?  There’s just something so very magical about being in the park to celebrate their many years of making people happy.

Whether you are planning on joining me for Magic Kingdom’s 50th, or you would just like some help booking your regular Disney vacation, you can start by contacting our Authorized Disney Vacation Planner, Patricia at All Dreams for Travel, and she can do all the work for you. Best of all, all of her services are FREE, all you have to do is click here to request a quote!