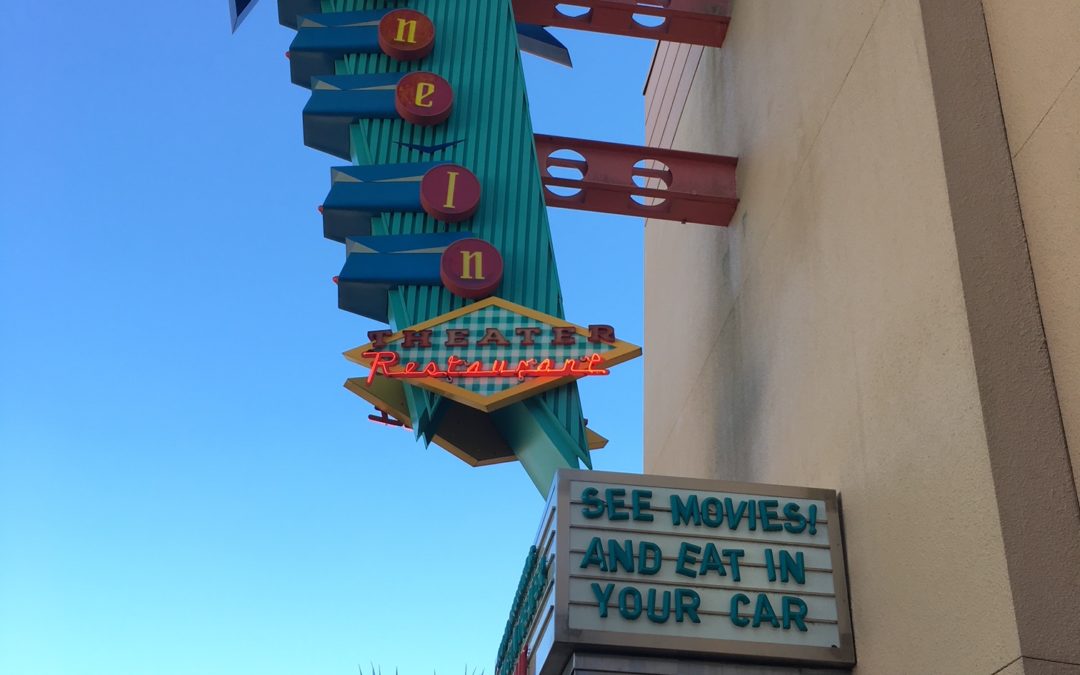 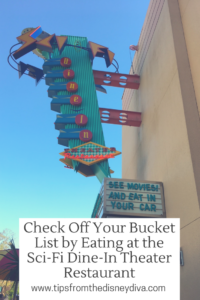 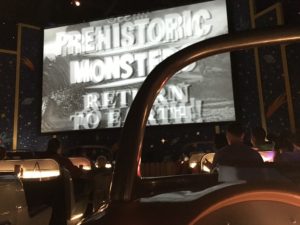 Nostalgic for B-movie Sci-Fit hits? Add this to your bucket list.

I’m an 80s child. While drive-ins were not as big then as they were when my parents were growing up, I do remember seeing dancing condiments on the screen and listening to a scratchy speaker hung in the car window quite a few times at aging drive-ins. Add those nostalgic memories and that fact that this would be a first for me, I had to have a meal at the Sci-Fi Dine-in Theater Restaurant at Disney’s Hollywood Studios. I think you need to have this on your bucket list too.

TIP!! You need, and I mean you really need, to plan ahead for this meal. I highly suggest that you book here at the 180-day mark before your trip. I tried to move my reservation based on my FastPass selections at 60-days out and I was unable to do so, even with checking daily. We had a dinner reservation that I tried repeatedly to move to a lunch reservation without any luck. Try making multiple reservations over a few different days at the 180-day mark and cancel those that you don’t need once you have your FastPass selections. 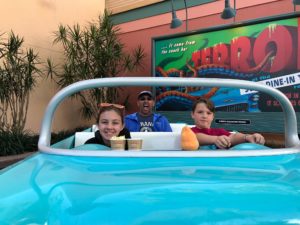 The restaurant is located on Commissary Lane not too far away from Star Tours.Since we could not move our reservation, we ended up arriving an hour earlier than our time. The check-in desk is right inside the door. I checked-in and was told they would do what they could, but likely we would need to wait for our reservation time and was given a pager that would go off when our table was ready. TIP!! Be sure to make your reservation for the Sci-Fi Dine-In Theater. I witnessed two parties that mistakingly reserved the 50’s Prime Time Cafe instead! We were shown an image of the two types of cars – ones with front seats and back seats with a small counter for your table (known as automo-booths) and ones with a large table and chairs with a front end/back end of a car attached. We would not have a choice of which type of car we would get. There was a large container of ice water and cone cups next to the door, which was a nice touch on a warm day. There were a few seats inside for waiting, but we headed outside since it was shady in the late afternoon and took a photo opportunity in the car that is just to the right of the entrance. This car is similar to the automo-booths inside the restaurant, but without the counter. While we waited, a host came around and offered us each a small cup of popcorn. In addition, another host headed over to us to play Disney trivia. I have to admit at being stumped at two questions. This Diva needs to brush up on her skills for next time. Another round of popcorn was consumed, and our pager went off about 45 minutes into our wait, which was 15 minutes before our reservation time. 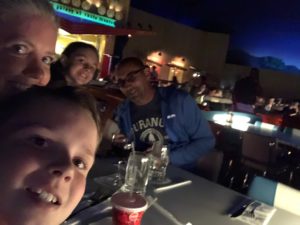 Seated at our long car table

The host brings you past the check-in desk and into the large dining room. This is the theater and it is amazing! The room is dimly lit with row upon row of cars and one large screen at the front and stars in the sky. In the back is the “concession stand”, where car hops will emerge to take your order and bring your meal. We were led to a car just to the right of center. It was one of the long table cars that would seat up to six. I was disappointed at first that we didn’t get one of the automo-booths, but in the end, I think it was better to have a large table and chairs to share food and conversation. TIP! It is dark and can be hard to read the menu with 40-plus year old eyes. We used our phones to light the menu for reading. Our car hop arrived promptly to take our drink order, and we found it difficult to focus on what we wanted for dinner since we found the movies so intriguing. 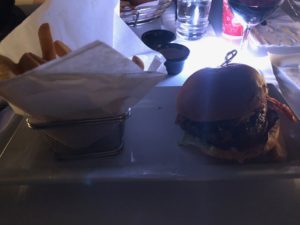 Beef and Blue Burger with Fries

In the end, we ordered Crispy Onion Ring appetizer, a Blue and Blue Burger, a Classic American Burger, Kids Popcorn Chicken, and Kids Mac and Cheese. Everyone loved their meal! Burgers were thick, juicy and very flavorful, and we all had thick-cut fries that were perfect as well. The onion rings were crispy as their name details. I had a glass of the Castle Rock Pinot Noir and Diva dad had the Orbiting Oreos. This was the drink highlight of his trip. Orbiting Oreos is an Oreo shake mixed with Godiva chocolate liqueur and a souvenir glow cube. I was allowed a sip and it was decadent! 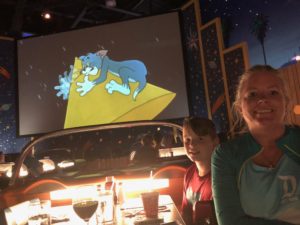 We had a clear view of the screen from our long table car.

Throughout our meal, we enjoyed clips from The Blob, several zombie clips, some ‘horror’ films, and even Tom and Jerry showed up. And remember those dancing condiments? They are here too. Walt Disney made an appearance showing us some of the “latest” inventions. In the age of technology, even my young ones enjoyed the retro feel of this restaurant and their eyes were glued to the screen. If that alone isn’t reason enough to add this to your bucket list, the atmosphere, the delicious menu, the unique seating, and the attentive staff round out my reasons why this was a MUST do for a trip.

If you would like to enjoy one of the best meals at Walt Disney World and check this off your bucket list, Patricia Payne at All For Dreams Travel can make this happen.

Hello! I'm Tinker Belle Diva. Just like you, I love all things Disney and have since my first trip to the Walt Disney World in 1980, followed quickly by my first trip to Disneyland. The love of Disney runs strong in my family and has been passed along to my daughter and son, who have been to Disneyland more times than I can count!