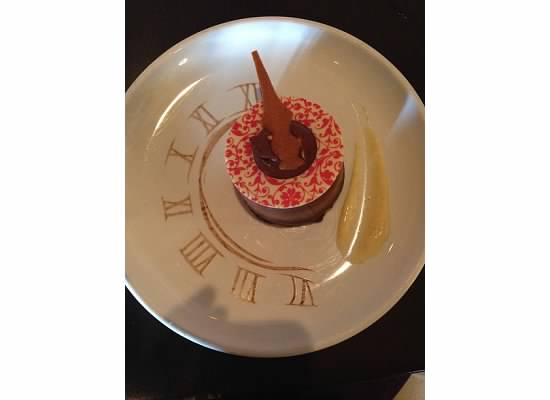 On our most recent trip to Disney World, I was able to check a major item off my Disney bucket list–eating at Cinderella’s Royal Table.  If I am being honest, this really wasn’t one I ever thought I would check off.  I have a little boy, so this was not something I ever even looked into.  But, on this trip, we were going to Universal Studios one of the days, and we were on the meal plan.  Obviously, you can’t use your Disney dining plan in Universal Studios, so it left us with an extra table service, snack and quick serve.  It was the extra table service that had me considering it because I knew that this meal took two table service credits.  I called to check about a reservation and learned that they could accommodate 3 but not 6, which is how many was in our party.  I thought about it (for like half a second) and then made the reservation for me, my mom and my sister.  My next call was to make the guys a reservation at Le Cellier. 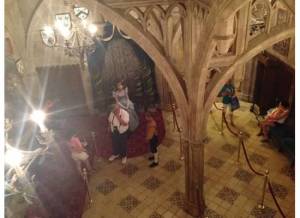 When we arrived and checked in, we were immediately lead to the line to meet Cinderella.  We stood in line for about five minutes and then were able to talk with her and get our picture with her.  After that we had to wait to be called to go up to the royal banquet. (MAJOR TIP:  Use this time to go to the bathroom.  There are no bathrooms on the floor where the royal banquet is.  You have to go halfway down the stairs to get to the closest one, and it is very small and the waiting area is even smaller.)  After a very short wait, it was our turn to be seated.  We were guided up the spiral staircase to our table.

The biggest surprise to me was how incredibly small the dining area was.  This explained why it is so hard to get reservations–it isn’t necessarily because it is so popular (although, this is true), but it is very, very small.  But, this is also part of what made it so special.  You felt like you were one of the select few getting to experience such an elegant dining extravaganza.

The first thing we received were our magical, royal scepters/wands. Even though we didn’t have any in our party, we noticed that the boys received swords, so my mom asked if she could trade her wand for a sword for Bryce. The waitress wouldn’t hear of it, and gave her a sword but insisted that she keep the wand.

It was now the time I was the most worried about it.  I am not a “foodie.”  Don’t get me wrong, I LOVE food.  But, I am a relatively picky eater, and I don’t typically care for “frou frou” food, which is what expected at this type of dining experience.  The menu had a good variety of foods, and I was able to find something that I really enjoyed (Click here for menu).  I also asked to see a kid’s menu, because I wanted to see what those options were, especially since most kids are like me and not into frou frou food either.  The kid’s menu had great options for kids–even the pickiest of eaters.

We placed our orders, and then anxiously waited.  First up was the appetizer.  It was an aassortment of salad, bread and cheese, along with a dip.  It was delicious, and I especially loved the salad dressing, which surprised me because I typically don’t like vinagerettes. 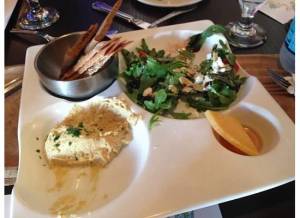 Next came the main dishes, which were delicious and beautiful.  They were almost too pretty to eat.  But, we were able to manage.  Sauces on foods is one thing that I am particularly picky about.  Ketchup and ranch dressing are about as “saucy” as I get.  But, I really did enjoy the sauce that came on mine (bottom picture).  Another part of not being a foodie is not being able to identify dishes or sauces, which is why I am posting pictures and not describing the foods.  My apologies to our “foodie” readers. 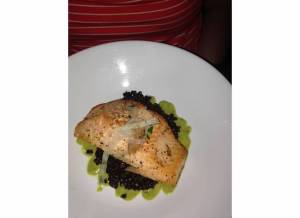 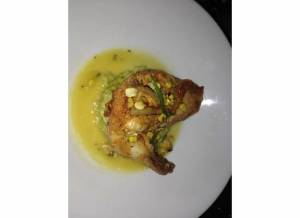 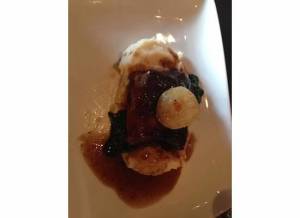 Next was my favorite part of the meal–dessert.  We ordered The Clock Strikes Twelve and cheesecake desserts.  The “Twelve” dessert was was not only appropriate given that we were eating at Cinderella’s house, but beautiful too.  I love dessert and find that no matter how full I am, there is always room.  I have never found a dessert that is too rich for me.  I laugh when I hear people say they were only able to eat a few bites due to how sweet or rich it was–Amateurs!!!  So, while I did not find this dessert extremely rich, some might.  I devoured the whole thing and was debating on licking the numbers off the “clock”–but thought it wouldn’t be very princess-like. 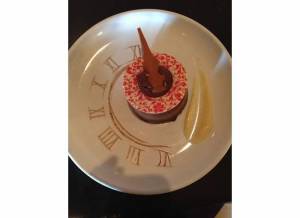 One of our favorite things about the meal was the way that they introduced the princesses.  Each princess was introduced with a very unique flair befitting of that particular princess.  They were royally announced and then made their regal entrance to the hall.  They then went to each table taking time to have pictures made and talk with the guests.  I suspected that since we didn’t have any children with us they wouldn’t spend a significant amount of time to get with us so that they could attend to the kids.  And, I would not have minded at all if this had been the case.  But, I could not have been more wrong.  They each talked to us in length (WARNING:  Snow White’s voice, while accurately depicted from the movie, is a lot to handle.  I could only take small doses of her).  Our favorite was Aurora/Sleeping Beauty/Briar Rose.  My cousin, who had just had a baby, was not able to make this trip with us as planned.  Since Aurora was her favorite princess, we asked if she would mind doing a quick video saying that we missed her.  After asking a few questions, Aurora said she was ready to go.  Without hesitation or stumbling she did a 40 second video telling how we missed her, how she couldn’t wait for her to bring her new baby princess to meet her, and even gave dressing instructions for the new princess.  It was so special, and, needless to say, my cousin LOVED It (TIP:  Don’t be afraid to ask characters to do special videos for family members.  We have always found them to be most willing to accommodate). 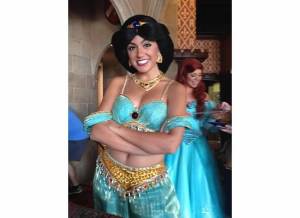 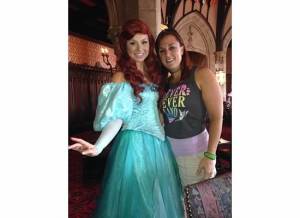 The last thing we received was our picture that was taken at the beginning with Cinderella.  We were give two 8×10’s and multiple 4×6 photos.  This was a nice surprise and a neat “free” souvenier.

THE RUN DOWN:  The biggest thing I considered was whether or not it was worth giving up the hallowed extra table service.  Because I have a little boy, it would not be worth it to me to give it up.  But, if I had a little girl, it would definitely be something I would do once.  But, in my opinion, while it was quite spectacular, because you have to give up a table service, once is enough.  But, like all things Disney, this depends on the party you are traveling with.  If your little princess adores the princesses and lights up at the thought of meeting them, then you may find this worth it.  But, I will give you a tip:  Akershus has most of the same ones, you get the “free” photos (this time with Belle), and it is only one table service.  It was also one of our favorite meals this past trip.  If I had to choose between the two, I would definitely pick Akershus.