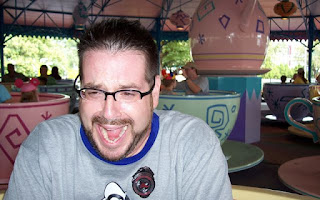 There was a time I could ride any ride. In fact, I used to seek out the most extreme rides. I had season passes to our local Six Flags. I’d go on road trips to Roller Coaster parks, such as Cedar Point in Ohio.

But over the last few years, as I approached and entered my 40’s, more and more rides started to have an adverse effect on me. Spinning rides, such as the Tea Cups were the first to hit me. Within the last couple of years, it’s become traveling backwards, such as on Everest, the TTA, and the Monorail. Now, as of just recently, it’s motion simulator rides such as Mission Space (The green, or “half throttle” side. I wouldn’t even think of doing the “full throttle” orange side!), and, to my great dismay, Star Tours!

Oddly, there are cases within most of these categories that don’t bother me at all! Dumbo, Rock ‘n’ Roller Coaster, and Haunted Mansion have little impact.

For a full list of rides that could potentially effect you, please see this excellent article:
http://www.tipsfromthedisneydiva.com/2011/06/disney-world-rides-info-for-what-ails.html

I’ve been trying to discover a way to combat this, and I may have had a bit of a break through, albeit small, on my last trip. First, though, let’s look at what else I’ve tried:

– I’ve found Dramamine is a bit of a help, but makes me drowsy. The less drowsy formula doesn’t seem to work as well.
– I’ve also tried Ginger Root Pills
– Ginger Peppermint Pills
– Gin Gin Candies, and found they have little to no effect at all.

I asked other Diva Writers for their advise, and here is some feedback I received:

D’land Diva:
“I am also motion sensitive. I have found that Bonine works better than Dramamine and I take it with breakfast, get it in my system. I still can’t do the spinny stuff though.”

THE Disney Diva:
“I put the ear patch on that you get by prescription from your doctor before going on cruises.”

Diva Mommy:
“I get motion sick on the plane ride, and also on the bus from the airport to the hotel. I never used to, it seems likes after I had my baby it started. I just always take some Dramamine and I’m fine.”

As mentioned, I feel I may have discovered something that seemed to help somewhat: A good nights sleep!

The thing is, on vacation, I am usually unable to sleep. In fact, I was well into my recent trip before I even got close to a decent nights rest.

Usually, I start off the day a little off-balance because I haven’t had more than 5 or 6 hours sleep. I talk about this in my article Too Excited to Sleep Syndrome.

It seems crazy, and I am not saying that this is a solution for everyone, but following a good nights slumber, I was able to ride Star Tours with very little sickness afterwards.

I have a cruise coming up in May, and plan on going to my Primary Care Physician to ask for treatment of motion sickness, so I will follow up after that vacation to share the results.

What about you, do YOU have any tips that have helped you combat motion sickness while at Disney?? Share them in comments!!