I remember in the 80s when Epcot opened, my family visited the Living Seas. I remember thinking that it was one really huge aquarium as I descended in my hydrolater and then rode my seacab (does anybody remember those things?) to “Seabase Alpha”. In fact, the Living Seas IS a huge aquarium filled with 5.7 million gallons of salt-water and over 6,000 sea creatures.

The Coral Reef Restaurant actually opened in 1986 at the same time as the rest of the Pavilion. In the 26 years that it opened and all the many times we have visited Epcot in those 26 years, I have never made an ADR (Advanced Dining Reservation) at the Coral Reef.

However, on the “girls leg” of my trip in February, my daughter said she’d like to eat somewhere different. So I went on my smart phone to the mobile Disney Dining Reservations site and booked a table for two, for later that day so we could “eat with the fish”! 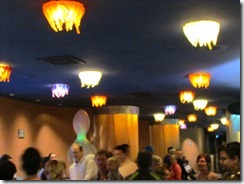 We arrived at the Restaurant and checked in. There was actually a bit of drama all around us, as a large family was trying to get themselves coordinated to celebrate their parents anniversary. They took up, I kid you not, most of the dining room. I stood and waited significantly longer than I thought I would.

The waiting room is interesting, it’s a little 80’s in style, with a good amount of neon. However, the blown glass light fixtures are very cool for even now. We were given our “buzzer” and with, literally, nowhere to sit in the entire waiting area, we decided to go outside to wait. We ended up waiting about 20 minutes past our reservation time. This was a little irritating, but we were not in a hurry so it was not as big of a deal.

When our table was ready, we were “buzzed” and a host came to take us to our seats. Warning: it is DARK in there! It was really kind of hard to see where I was going. I would be sure to hold on to the hand rails.

Once inside, the restaurant reveals that all tables are oriented to face towards the 5.7 million gallon tank. Which means your primary entertainment for the night will be beautiful fish, many hungry looking sharks, and a giant sea turtle. This was pretty neat if you ask me! I mean, I’ve never eaten with sharks before. 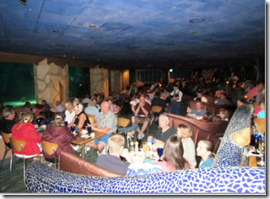 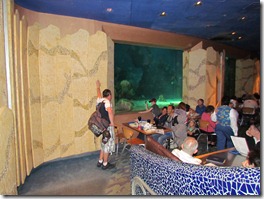 We were lucky to be seated right beside the tank. The first time my daughter had a shark swim beside her head, she was a little freaked out, but settled in quickly. 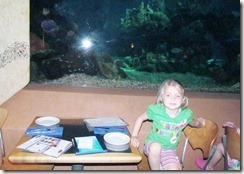 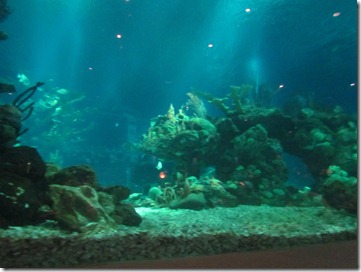 The menus, which feature seafood items (seems sort of mean to eat fish in front of fish to me) range between $15-$36 for lunch and $36-$60 for dinner. On the Dining Plan it is considered to be a “Table Service” meal. So EXCITINGLY, it is only ONE dining credit making it a pretty good value if you’re on the dining plan, but a pretty big splurge if you’re paying out of pocket. You should be able to click on the photos below to see an enlarged version of the menu and the prices. You will see they also suggest good wine pairings with each meal to help make it that much more special. 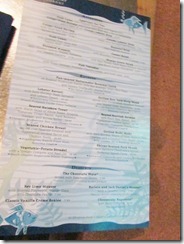 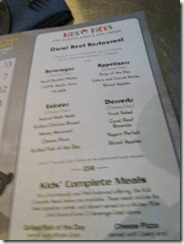 Also, on your table, you will find a cool chart with information about the aquarium and photos to help you identify different sea creatures in the tank. You can keep this which makes a cool souvenir. 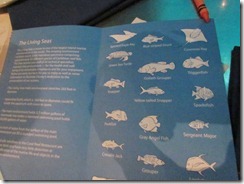 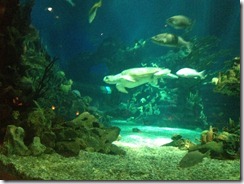 They brought yummy bread with our meal which I remember thinking was delectable. Even the shark looked like he wanted a bite. 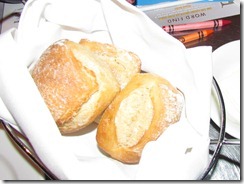 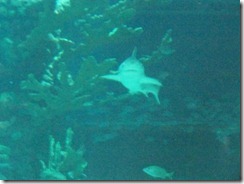 I went for the Grilled New York Strip Steak with Horseradish Smashed Potatoes and Veggies for $31.99. A STEAL for a good steak at Disney World. At both California Grille and the Yachtsman I’ve paid over $50.00 for a steak meal and this was honestly just as good of a steak. Making Coral Reef my BEST STEAK VALUE meal at Disney! It was heavenly. 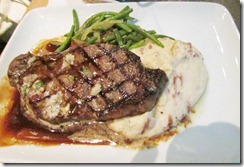 My daughter had the Wacky Macaroni for $8.99
A few weeks later my husband, son and inlaws went. He had the Shiraz-braised Pork Shank with Rainbow Chard and Spiced Butternut Squash Puree $29.00 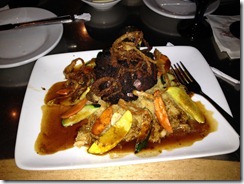 and said he thought it was very good. “Not California Grille good, but good” is his direct quote.
My mother in law had the Lobster Ravioli with Rock Shrimp, fresh Tarragon and Lobster Cream for $26.49 and both my husband, who stole a bite, and mother in law said it was delicious.

The shark seemed happy I didn’t spring for one of the many fish items on the menu! 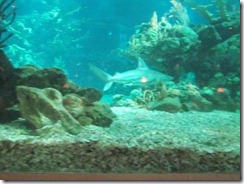 On hubby’s trip, the Divers were in the tank feeding the fish so he had a really neat show. 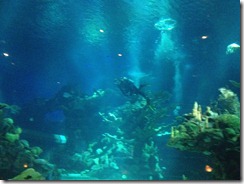 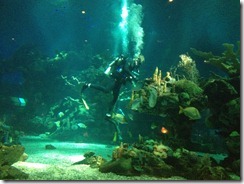 I had heard mixed reviews for the Coral Reef, which I think made me hesitant to try it, but I will be honest and tell you that my experience was EXCELLENT (except for the wait at the beginning). The environment was extremely unique, the food was delicious and I thought it was not overpriced in comparison to many of the other Table Service meals at Disney World.
Again, this is a great value if you are on the Dining Plan so consider working it in your plan. 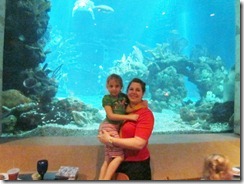