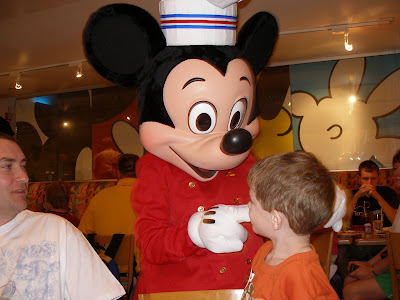 Here in Southtown USA some folks who have been here forever and a day refer to lunch as “dinner. Then “supper” is the late night meal. So today, we’re back to talking LUNCH (or Dinner, your call) at the Magic Kingdom.

Specifically we’re going to talk about Counter Service meals. For counter service meals you do NOT need advanced dining reservations. You just show up, stand in line and grab your goodies.

There are three Counter Service that stand above the rest (cause there are technically MORE). Casey’s Corner, Cosmic Ray’s, & Pecos Bills. Pinnochio’s Village Haus and Columbia Harbour House also offer some tasty lunch offerings. There are also a few restaurants open seasonally that provide counter service. You could also choose food from “snack carts” that you could combine components to make a “lunch meal”. So, lets get started. **Special Thanks to Allearsnet.com for all the research they do to find out the current prices & menu at the WDW dining locations!! 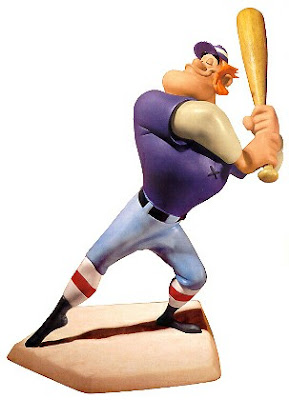 Casey at the Bat was originally a poem written by Ernest Lawrence Thayer in the San Francisco Examiner – June 3, 1888. The story was shown on the silver screen when RKO released the Disney produced film Make Mine Music. If you’ve never seen it you really should because it will make eating at Casey’s Corner all that much more entertaining.

Casey’s has a cute vintage sports theme. I’ve read some people complain that the lines are long, but honestly I have never run into that. However, I do concur that there is hardly EVER anywhere to sit. There are some 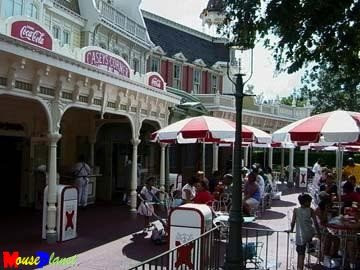 small grandstands inside (where the air conditioning is) and a few small tables. Outside there are some tables outside with umbrellas.

Casey’s is off of Main Street and is in a PRIME location for the parade. Its always SLAMMED at “official lunch time” so I’d suggest always taking an EARLY lunch (10:30) or a late lunch (1:30-2:00) to avoid massive lines and have a place to sit.

Now these are no tiny dogs like you’re use to getting at the grocery store. Two kids can easily share one dog. THERE ARE NO KIDS MEALS AT CASEY’S CORNER. Food is food there. So they’ll tell you what Disney Dining includes. I personally can eat one all by myself, but considering I get random cravings for a Casey’s Corner’s dog there’s no surprise there. I have a student who is a Disney Vacation Club member (which I hope to spend some time talking about soon) and has been to Disney 60 times since joining 10 years ago. He swears that there must be “crack or something” (his words) in Casey’s hot dogs b/c they are addictive! 🙂 I’d have to agree. I’m not sure it’s extremely cost effective really, but boy that’s good eatin’ in our house. 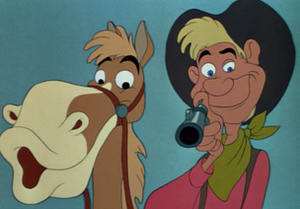 Pecos Bill made the leap from American legend to film in the 1948 Disney animated feature Melody Time. He’s a good ole cowboy on his trusty beloved horse Widow Maker, so its only fitting that Pecos Bill’s Tall Tale Inn & Cafe would be found in Frontierland.

Pecos Bill’s offers more variety on its menu than Casey’s Corner and, in my opinion, make it one of the best places to watch parades since all parades either begin or end there at a “hidden door” at the base of Splash Mountain.

A lot of people don’t realize that any items in the “adult meals” can be ordered a la carte. If you don’t want the french fries, just the burger then say so and they’ll take it off the price. Also, notice that’s a DOUBLE cheeseburger. You can order an extra bun, which costs a little under a dollar at last check, and make TWO CHEESEBURGERS for the cost of one. 🙂 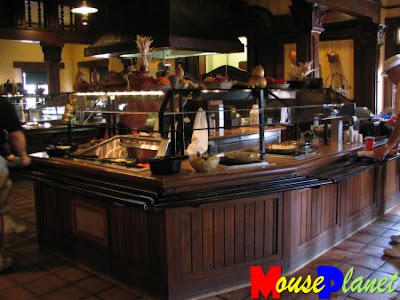 Pecos Bill’s also has an AMAZING “fixin’s bar” and you can design your burger however you’d like.

It’s also a super place for dinner since it can help you get prime spot to view Main Street Electrical Parade. 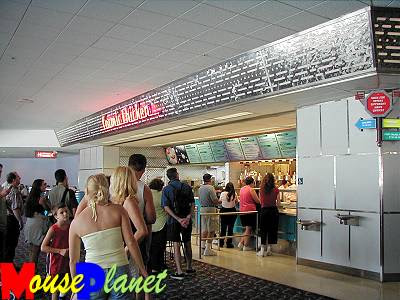 You probably guessed that Cosmic Ray’s is in Tomorrowland. It looks super futuristic with a lot of chrome every which a way.

It BY FAR has the most seating of an other counter service location. It has some outdoor tables I like as well, but there are plenty of tables. Again, don’t be dumb and go at 12 noon where everybody and their mama will be there.

Menu is mostly typical fast food fare, but more of the Chicken variety. The chicken meals (except kids meals) are all huge and can EASILY be split between two adults. So use your money (and your dining credits) in a smart way and split some meals dearies.

By the way…. here’s a BIG thing. If you are not really all that hungry AND you’re not on a Disney dining meal, ORDER A KIDS MEAL!!! They wont know and don’t care honestly. So order what you want. All items can be ordered a la carte EXCEPT the kids meals of course

There are two counter service locations that are good, but I you’ve seen my personal top three. 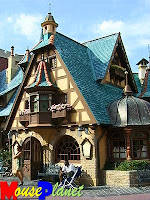 Pinocchio Village Haus
Fantasyland’s counter service location is Pinocchio’s. It offers something the others don’t have, PIZZA. The whole restaurant has an Italian flair and its in Fantasyland (which hopefully you will have finished WAY before lunch time or you’ll be standing in lines for rides like you would not believe!!)

I actually have NOT been to eat at Columbia Harbour House but hear its very relaxing and that it has som great views of WALT DISNEY WORLD
Menu seems a bit “fishy” for a landlover like me, but I’ll try to hit it at our next trip in 13 days, 23 hours and 43 minutes.
The following restaurants are open “Seasonally” (basically in the thick of summer)

Be Our Guest -In Fantasyland also has Counter Service for lunch

There are also some snack carts that you could make a meal out of, but I’ll spend some time talking about it in another post.

Now….. COME AN GIT IT!!! *For even more help planning your trip read my post Planning your WDW Vacation.