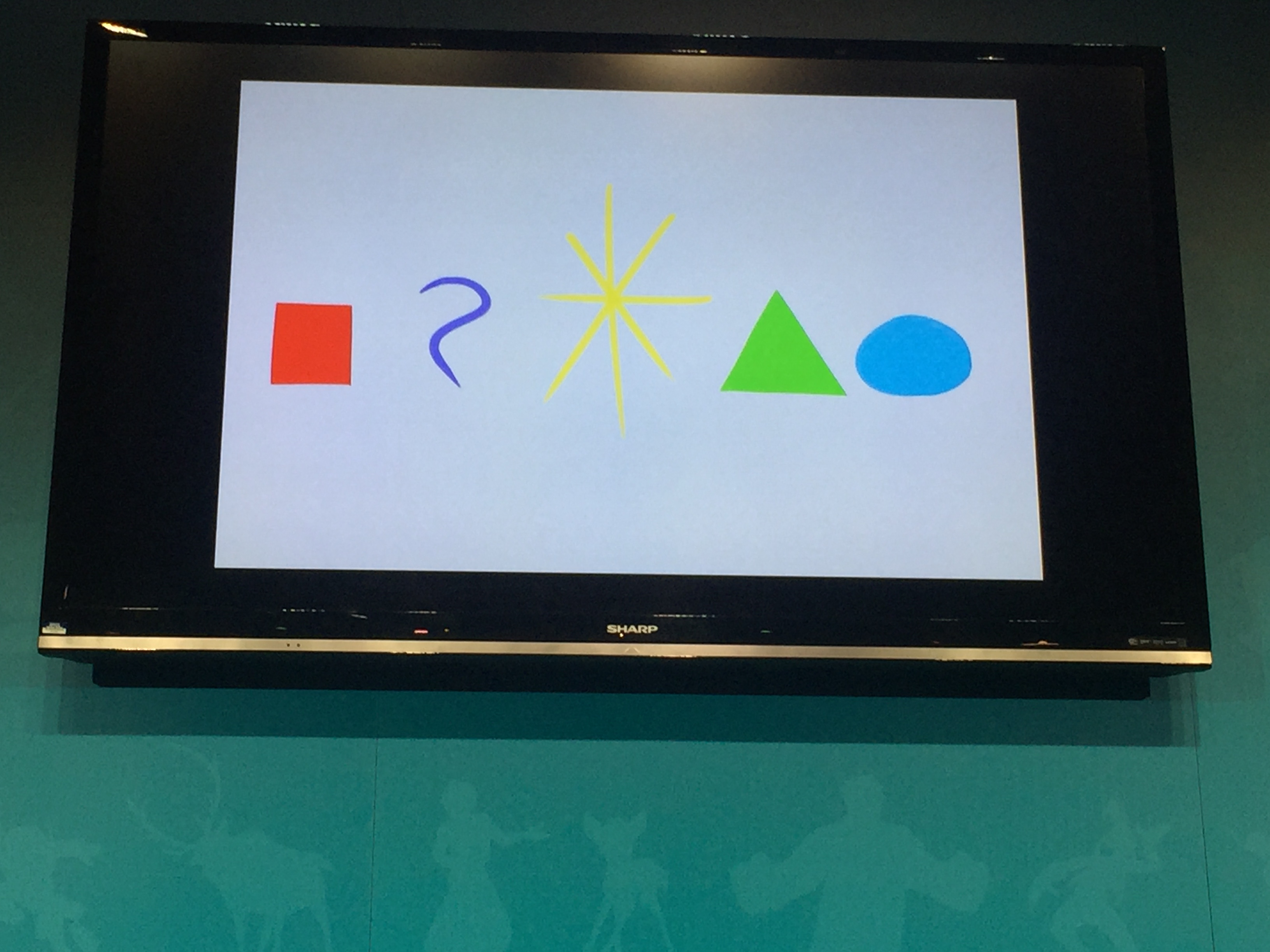 During the three day weekend of the D23 Expo, guests learned to experience Joy, Sadness, Fear, Disgust, and Anger in new and exciting ways. Special guests, including the voice of Sadness herself: Phyllis Smith,  helped bring the unique concepts and behind the scenes imagery of these 5 emotions from Pixar’s latest movie, Inside Out, to life in panels each day.

To start off, Albert Lozano (Character Art Director) did presentations both Friday and Saturday in which he taught us how to draw each emotion. He would start off with a series of shapes as the general inspiration for each character and slowly turn them into the lovable animations we know today. Albert did some drawings highlighting each shape, like a square for Anger and a triangle for Disgust. 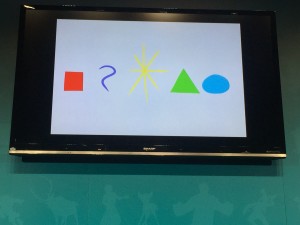 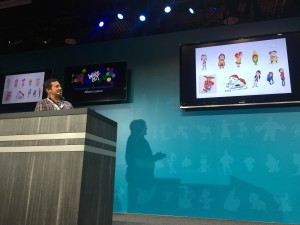 Although, Albert Lozano shared only one crucial step in the creation of Inside Out in his presentation, in a panel with Jonas Rivera (Producer) and Pete Docter (Director) on Friday, we learned that there are many stages in developing each emotion. Some of these stages include sketches, movement and expression tests, sculpting, story panels with audio, and layouts in the computer. These stages each take time – leaving years to fully develop an animation ready emotion. 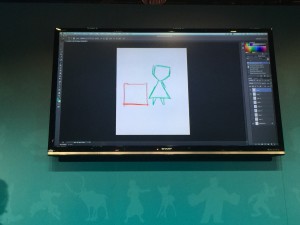 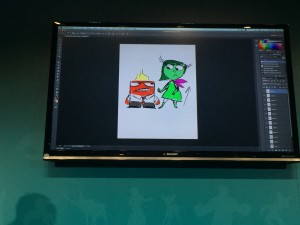 But Jonas revealed that so much time went into learning about our emotions before they were even ready to be put into characters for the movie. What are the emotions? Why do we have them? What are their rules and what is their job? These are just some of the many questions that needed to be answered to help build a meaningful and accurate story line for Riley’s head. He mentioned they even had “Pride” and “Hope” characters for a while until they ultimately deemed those characteristics of what they wanted Joy to ended up being. 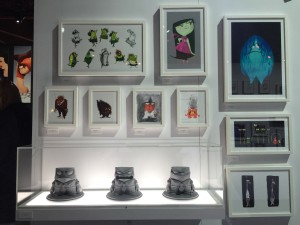 But what about Riley? She’s the entire setting of this film and well, Pete enlightened us about how Riley came about. Like most of the ideas Pete has had for Pixar films, the idea of emotional acceptance came from his daughter, Ellie. Ellie, who even voiced the young Ellie in Up, has slowly been growing up in front of Pete’s eyes and recently he’d noticed her pull away from things she had normally been excited about. This maturing quality of hers inspired the growing up that Riley experiences after moving to a new home in Inside Out.

Since Riley is really just the setting of Inside Out, Pete had to come up with an emotional story line to hook John Lasseter during his pitch. He wanted to pit two emotions together to create conflict and bring about a compromising ending, and to do that he started with Joy and Fear. It’s easy to see how those two clash, but unfortunately there was little to no compromise between the two. So Pete switched Fear out with Sadness and viola! – the rest was history! 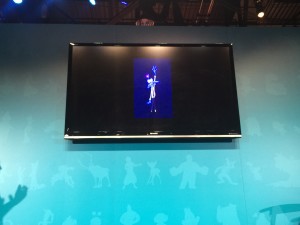 Developing a lovable Sadness was quite the challenge for Pete, Jonas, and their team. While they tried to over exaggerate each emotion for comical purposes, it just seemed like Sadness was too much a dead weight with nothing to offer but a few tears. They needed to make her into a complex character, give her a heart  and become something to learn from, not a crybaby all the time. These were the fundamentals that they idealized for Sadness, but they needed a unique voice to bring those aspects to life – and that’s when they brought on Phyllis Smith.

Jonas first thought of Phyllis Smith for the voice of Sadness when he was watching the movie Bad Teacher. Phyllis’s character in that movie had a lot of innocence and vulnerability – characteristics they were looking for in Sadness.  Phyllis brought a lot of hesitancy and questionable tones out of Sadness, giving her a depth the animators had not previously thought of as well. They took snippits of lines from Bad Teacher and put them to an animated Sadness for comparison – where they ultimately decided she was the voice they wanted! 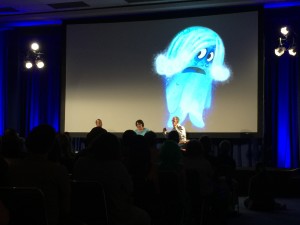 Phyllis mentioned she was blown away at being chosen for the role, and while she admitted she would have said yes over the phone, it was the overwhelming feeling she got during her pitch that got her the most excited about this opportunity to become Sadness.  She thought it was a lot to take in during the pitch – feeling like she had walked into “Genius Land” as she put it and she was crying on the inside from excitement!

Being the 2nd to be cast of all the emotions, she started recording sessions right away. In a faux recording session  during the panel, Pete and Phyllis demonstrated what it was like to create the voice of Sadness. Pete would guide her through the lines, giving examples of the emotional depth he was looking for to make sure Phyllis wasn’t too rigid in the idea of being Sadness. He tried to make her kind of annoying during the beginning of the film and bring out her more understandable side throughout the rest of the movie. They also kept scolding Phyllis for being so physical while recording (like rubbing her pants to mimic vulnerability) as it made extra noise in the booth! They laughed about it on stage because Phyllis felt so guilty, but that’s just the kind of acting she does!

For those of you that have seen Inside Out and are fans of Pixar, you know that there are always hidden “Easter eggs” in each movie. Pete and Jonas admitted that the Pizza Planet Truck appears 3x in the movie and that there are “concrete” dinosaurs leading up to the Good Dinosaur movie coming out later in the year. Haunted Mansion music is played at one point as well, and if you look carefully in the snippets of Riley’s memory, some images are pulled straight from the Married Life sequence of Up. You may need to watch Inside Out a couple of times to catch all the hidden things!

Guests at the 2015 D23 Expo learned firsthand what it was like to create the emotions of Pixar’s Inside Out from the actual creators of the movie!  The one of a kind panels brought the 5 infamous emotions that hit the big screen and showed how they came about from concept to cartoon. I think after learning so much about these characters and my own emotions, I can say that Inside Out is my favorite Pixar movie to date!