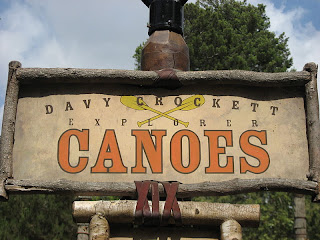 Only open during warmer weather, Davy Crockett’s Explore Canoes are a great way to explore The Rivers of America and Tom Sawyer Island. Seating about 20 guest, this is one of the few rides that you can go on that has no track and no motor! Each canoe has a guide who helps everyone say in rhythm and who acts as a ruttier but besides that it’s all up to you!When it originally opened in 1956, the ride was called Indian War Canoes and was part of Frontierland’s Indian Village expansion and every canoe had a real American Indian as a guide. When the Indian Village expansion closed down in 1971 so did the ride, but it was re-imagined and opened up again later that year as Davy Crockett’s Explore Canoes and every guide was given a coonskin cap.
Anyone can take a relaxing ride on the Mark Twain Riverboat or the Sailing Ship Columbia, but it takes a real adventure to propel themselves around the island. To anyone who has ever gone river rafting or kayaking and thinks this will be a breeze, you are right. But for the more experienced rowers, remember that this may be other peoples first attempt at it. This is a leisurely stroke around the island, especially since most people will not be together the whole time. But you won’t be stranded, the boats are designed to be lightweight and the guides will get you around the island in a decent amount of time.
Mine Train Through Nature’s Wonderland which ran from 1960 to 1979 before it was replaced with Big Thunder Mountain. Personally, I would have loved a chance to ride on Nature’s Wonderland and I wish they could have found a way to keep it around. Some evidence of it’s existence still remains, but mostly it is a distant memory.

This ride offers all the same views as the Mark Twain and the Columbia but at a different perspective. If you are close enough to the Mark Twain you may hear some of the dialog of the tour but for the most part you are on your own. You still get a tour of the Native American life such as the Native American village, a little boy fishing with his dog, and all the real and planted wildlife. You will get to be up close and personal with both of the larger boats going around the river. They have the right of way since they are both on tracks, so you might get to ride the waves they put out. But don’t be afraid to wave as they go by. Many of those guests are curious about who you are and what you are doing and are sure to wave back. The canoes also offer an interesting view of the old

There is no height requirement for the ride, but you might want to make sure you have a good grip on your little ones so they don’t dive into the Rivers of America. If you really want to try your hand at the canoes, I recommend you check online to make sure that it is going. Like I mentioned before, it’s really only during warmer weather and some weekends. There is a chance of getting splashed by other guests so I’m sure they are trying to keep everyone happy by not risking getting wet during the colder weather.
Scream Factor: 1 especially if a younger one is afraid of the water.
Wheelchair accessible but you must contact a Cast Member first
Share this tip!