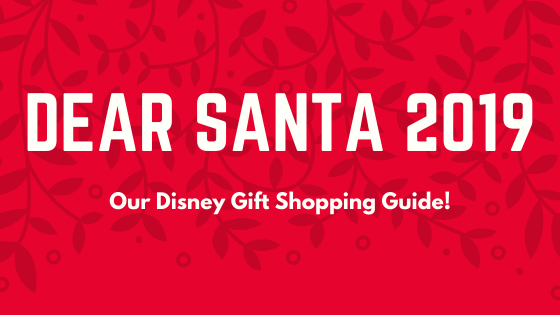 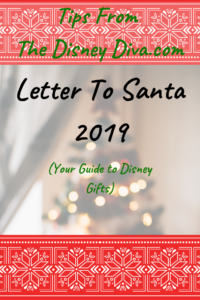 Wow! What a year am I right? It’s crazy that we’re back here already!

This year we accomplished a lot of good things! We saw some great movies like Toy Story 4 and Frozen 2, we celebrated Mickey Mouse’s 90th birthday, and some of us were lucky enough to go to Star Wars: Galaxy’s Edge!

Now we’ve been really good this year and wanted to write to you and let you know what we want for Christmas this year.

There’s a lot of really cool toys out there to be excited about! The remakes of Aladdin and The Lion King are still fresh, Toy Story got a sequel 25 years after the first one, and all of this means that Disney toys look oddly like they did in 1995.

For the Lion King, I think we’d like The Deluxe Lion King action figure set. This thing comes with action figures for nearly all of the characters from the movie, just begging for an opportunity for you to recreate our favorite movie scenes or perhaps to make our own stories! They’re modeled after the *cough better cough* animated movie and remind me of toys I used to have a long time ago.

Aladdin was always one of Disney’s coolest action heroes and a great action hero needs a great action figure. This year, Aladdin finally got his addition into the popular “Toybox” series of Disney Action Figures. Every time I see these though I die a little inside thinking it would be so cool to have more Disney Infinity games… I don’t suppose there’s anything you can do about that, could you Santa? 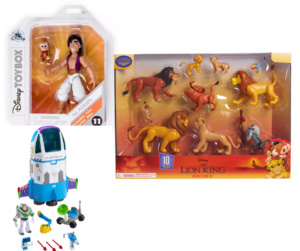 keep an eye out for these and other toys at major retailers and at the Disney Store.

TOY STORY! I just want all of it. please and thank you. If you want specifics though, there’s the Star Command Space Ship playset that comes with a detachable shuttle, a moon buggy, laser pistol, and a million other doohickeys. I remember something similar coming out back in the day for the first toy story and I’m really excited that this thing exists! Plus it’s compatible in scale to the Toy Story 4 line of action figures, making it an ideal addition to a collection if you already have some of them.

And then the big holiday hit- Frozen 2. I’ve been excited for this movie for a while and there are plenty of toys here. My obvious suggestion is the counterpart to the action figure- the Frozen doll collection featuring Elsa, Anna, Kristoff, Sven and Olaf. I find that simpler toys stick around in memories and are easier to play with than electronic ones, but hey, You’re Santa! You know what the kids want!

For the Movie buffs

The obvious gift for us movie buffs this year is a subscription to Disney+. The list of shows and movies on that service is ridiculously huge. Everything from “High School Musical” to “Hercules The Animated Series” is on there (well, “Buzz Lightyear of Star Command” isn’t. Is there anything you can do about that one Santa #ReturnToStarCommand ?) it’s also extremely convenient that you can put the service on any device from an iPad to a PlayStation 4! 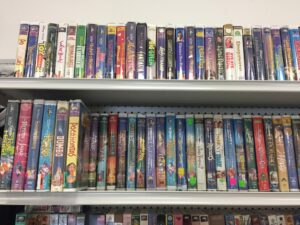 If you’re looking for more of a one-time purchase deal that’s easy on the wallet, may I suggest a rather unconventional gift a movie lover would really appreciate go to the thrift store, pick up an old VCR, and grab a bunch of Disney VHS tapes!

Old media is cool again, and for a lot of movie buffs (like myself) that get a little bogged down by how modern Disney likes to operate, these old VHS tapes are a great reminder of why we love them so much in the first place! It’s a cool and unique gift, packed with Nostalgia and happiness and is sure to surprise and delight anyone on Christmas. That said, Consider going retro with your gifts! We have a great article here on collecting rare and unique retro Disney stuff

Books and games are a good addition to any present haul from Boxing Day to your second cousin’s bar mitzvah, providing hours of entertainment.

First thing I want to talk about is the new re-release of the classic Aladdin and Lion King video games, originally for the SNES, Genesis, Gameboy, and Game Gear platforms in the 90’s and now on all popular gaming systems like the PlayStation 4, Switch, and Xbox 1. These games are crazy hard but new features like the fast-forward function make the game significantly easier and more fun to explore and play on your own. Definitely an interesting and unique gaming offering this year.

For boardgames, there are always movie-based versions of popular games whenever a new movie comes out. Personally, I’m excited for the Toy Story Monopoly game, but that’s probably because I’m a Fanatic and I’ve probably praised Toy Story enough in this gift guide…

For those of us who don’t know what we want, a quality subscription gift-service would be cool! Disney officially has one “Disney Princesses Enchanted Collection” for girls (or anyone else who likes princesses I suppose), a “Bedtime Adventures” box for people who like to go to bed, and “Backstage Disney” for those who like a bit more behind-the-scenes stuff. Compound that with some unofficial boxes like “Mickey Monthly” that specializes in Disney products and Theme Park souvenirs, or any of the many many many many Etsy store offerings for similar products.

If you don’t like your presents randomized then… Legos? Legos are popular around Christmas. There’s a Lego set for anything these days.

Anyway, Thank you so much for all you do, Mr. Claus. I know that all of us at Tips and all those good boys and girls around the world love and adore you and the work you do. Please enjoy the copious amounts of cookies we’ve collectively supplied as well as our best wishes to Rudolph, Frosty, and of course the Mrs.